Basque Americans (Basque: euskal estatubatuarrak) are Americans of Basque descent. According to the 2000 US census, there are 57,793 Americans of full or partial Basque descent, but the real number of Basque Americans could easily reach 100,000 people. Of them, 41,811 people claimed be simply Basque American, 9,296 claimed be originating from Spanish Basque Country, and the other 6,686 claimed be originating from the French Basque Country. The states with the largest Basque-American populations are California (20,868), Idaho (6,637), Nevada (6,096), Washington (2,665) and Oregon (2,627).

Referring to the historical ties that existed between the Basque Country and the United States, some authors stress the admiration felt by John Adams, second president of the US, for the Basques' historical form of government. Adams, who on his tour of Europe visited Biscay, was impressed. He cited the Basques as an example in A defense of the Constitution of the United States, as he wrote in 1786:

"In a research like this, after those people in Europe who have had the skill, courage, and fortune, to preserve a voice in the government, Biscay, in Spain, ought by no means to be omitted. While their neighbours have long since resigned all their pretensions into the hands of kings and priests, this extraordinary people have preserved their ancient language, genius, laws, government, and manners, without innovation, longer than any other nation of Europe. Of Celtic extraction, they once inhabited some of the finest parts of the ancient Boetica; but their love of liberty, and unconquerable aversion to a foreign servitude, made them retire, when invaded and overpowered in their ancient feats, into these mountainous countries, called by the ancients Cantabria…"

"…It is a republic; and one of the privileges they have most insisted on, is not to have a king: another was, that every new lord, at his accession, should come into the country in person, with one of his legs bare, and take an oath to preserve the privileges of the lordship".[2]

Authors such as Navascues, and the Basque-American Pete T. Cenarrusa, former Secretary of the State of Idaho, agree in stressing the influence of the Foruak or Charters of Biscay [Code of Laws in Biscay] on some parts of the US Constitution. John Adams traveled in 1779 to Europe to study and compare the various forms of government then found on the Old Continent. The American Constitution was approved by the first thirteen states on 17 September 1787.

File:States1.gif
Population of Basques by State

Basque immigration peaked after the Spanish Carlist Wars in the 1830s—Ebro customs relocated to the Pyrenees—and in the 1860s following the discovery of gold in the foothills of the Sierra Nevada mountain range of Northern California. The current day descendants of Basque immigrants remain most notably in this area and across the Sierras into the neighboring area of northern Nevada, then northward, into Idaho. When the present-day states of California, Arizona and New Mexico were annexed by the United States after the Mexican–American War (1848), there were reportedly thousands of Basques of Spanish or mixed Mexican origin living in the Pacific Northwest.

By the 1850s, there were some Basque sheepherders working in Cahuenga Valley (today Los Angeles, California). In the 1870s, the Los Angeles and Inland Empire land rush reportedly attracted thousands of Basques from Spain, Mexico and Latin America, but such reports do not bear out in a current census of Basque persons in the Southern United States where Basque persons are exceptionally rare in US census reporting. By the 1880s Basque immigration had spread up into Oregon, Utah, Montana, Wyoming, with significantly lesser numbers reaching the Southern states of Arizona, New Mexico, and Texas in the Southern most region. By 1895 there were reportedly about ten thousand self reporting Basque-Americans in the United States.

The current census figures demonstrated in the US map on this page are remarkably low in comparison to these reports and the overall increase in the US population since the 19th century. There has been a radical decrease in Basque immigration since that era which has resulted in the significant decline in persons of Basque national or Spanish origin throughout the US. Most of the self reporting Basque persons remaining in the US today are descendants of the original peak of Basque immigrants who arrived between 200 and 100 years ago, typically reporting as multi-generational or great great grandchildren (1860 immigrants) as opposed to native born persons of Basque ethnic identification and their subsequent immediate family, children, or grandchildren.

The degree to which one self reports being "Basque" is a personal choice, often tied to an interest in one's heritage whether one is the grandchild of a native born Basque or of significantly mixed Native American (Mexican, S. American, etc.), Anglo European, or other racial admixture. There are significant numbers of Mexicans with Basque names, as many as 1 million self reporting Mexicans of Basque racial or surname heritage today.

Thousands of Basques were recruited from Spain due to severe labor shortages during World War II. They came under contract with the Western Range Association between the 1940s until around 1970.[3] The Spanish Right of Return extends Spanish citizenship only to the grandchildren of Basque immigrants who were born in Spain and forced to flee during the Francoist uprising in the mid-1930s.

There are nearly fifty such clubs in the US, the oldest of which is the Central Vascoamericano (founded 1913), today New York's Euzko Etxea situated in Brooklyn. In the west, in 1907 there were efforts made to set up a club in Stockton, California. In 1914, the Basque Club of Utah was founded in Ogden, while in 1960 [4] the first Zazpiak Bat Club was started in San Francisco. In 1938, the Basques in the Bakersfield area founded the Kern County Basque Club. Even though there are Basques in each of the fifty states, according to the most recent census, Basque clubs are only found in New York, Florida, California, Nevada, Idaho, Oregon, Utah, Washington, and Wyoming. However, there is a significant Basque population in Arizona, Colorado, Connecticut, Montana, New Jersey, and New Mexico. Basque-American clubs have connections with other Basques around the world (across Europe, Canada, Mexico, Bolivia, Peru, Puerto Rico, Chile, Argentina, Australia, South Africa and the Philippines) to unite and consolidate a sense of identity in the global Basque diaspora. 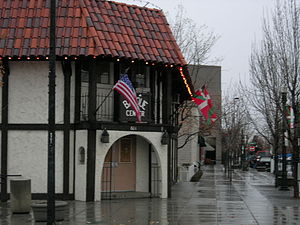 No US state is more associated with Basque people and culture than Idaho. Basques today are an integral part of the state's social fabric, especially in Boise. Prominent Basque-American elected officials in Idaho include longtime Secretary of State Pete T. Cenarrusa, his successor Ben Ysursa, both Republicans, Democrat David H. Bieter, the current Boise mayor, as well as Republican, J. David Navarro, the current Clerk, Auditor and Recordor of Ada County, the most populated county in Idaho.

Basques were initially drawn to Idaho by the discovery of silver, in settlements such as Silver City. Those that did not directly become involved in mining engaged in ranching, selling beef and lamb products to the miners. While some such immigrants returned to Basque Country, many remained, later to be joined by their families following them in immigration.[5] Exact counts of Basque immigrants to Idaho are not practical to determine, as the United States Census did not distinguish between Basques from other Spanish immigrants, though a majority of Spanish immigrants to Idaho likely self-identified as Basque.[6]

Since 1990, Boise and Gernika have been sister cities. Idaho achieved statehood in 1890 along with the first Basques arriving there around the same time. By 1912, some of the pioneers, such as Jose Navarro, John Achabal, Jose Bengoechea, Benito Arregui, John Echebarria, and Juan Yribar, were already settled and had property in the state.[7] 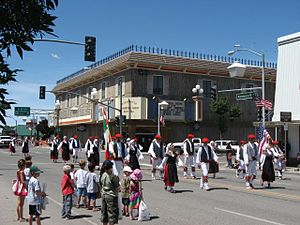 In March 1973, a group of Basque-Americans met in Reno, Nevada with a questionable proposal, especially considering Basque history. The group hoped to forge a federation and create a network within the larger Basque community of the United States. The Basques had never been united in either the Old Country nor in the New World. The Basque Country, or Euskal Herria, had never been "Zazpiak Bat" (Seven Territories Make One) representing a unified, self-conscious political community, it rather showed a political structure of a confederate nature—separate autonomous districts with a similar national, institutional and legal make-up. Euskal Herria often referred to just the local region.

This detachment of the Basques was reflected in the Basque communities of the United States. Basques of Biscayne descent in parts of Idaho and Nevada interacted little with the Basques of California, who were largely northern or "French Basques." When delegates from the Basque clubs of Los Banos, San Bernardino; and San Francisco, California; Boise and Emmett, Idaho; Elko, Ely and Reno, Nevada; Salt Lake City, Utah; and Ontario, Oregon gathered together, they were well aware that there was little if any communication between the various Basque clubs of the American West. They were attempting to cross the divide—real and imagined—between Basque-Americans. Seventeen years later "French" Basques and "Spanish" Basques joined a federation to work together. Individual clubs set aside competition in an effort to preserve and promote their shared heritage.

The North American Basque Organizations, Inc., commonly referred to by its acronym N.A.B.O., is a service organization to member clubs that does not infringe on the autonomy of each. Its prime purpose is the preservation, protection, and promotion of the historical, cultural, and social interests of Basques in the United States. NABO's function is to sponsor activities and events beyond the scope of the individual clubs, and to promote exchanges between Basque-Americans and the Basque country.

Future of Basques in the US

The new generations exhibit the natural process of Americanization. To be Basque or to be part of the Basque phenomenon is an option today that may or may not be exercised. Those who wish may strengthen their ties via cultural elements such as dances and customs, while in some there is also the desire to travel to Europe and study Basque, Spanish, or French. In recent years there has been the resurgence of Basque language classes, facilitated by new courses via the Internet. With succeeding generations the mode of being Basque has adapted to a new environment, and the concept of Basque-ness has altered.

The following is a list of notable Basque-Americans of either full or partial Basque descent:

The Wyoming Basque community, including a depiction of a religious festival, is the focus of the third episode of season two of Longmire, "Death Came Like Thunder."[11]