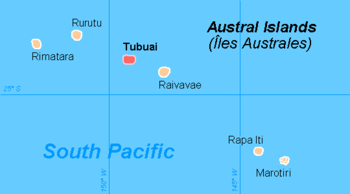 Location of the two Bass islands to the southeast of the Austral group.

Geologically, the Bass Islands are distinguished from the Austral Islands in that their vulcanism appears to be much more recent.

Rapa, sometimes called Rapa Iti (Little Rapa, to distinguish it from "Rapa Nui" (Big Rapa), a name for Easter Island), is the largest and only inhabited island of the Bass Islands. An older name for the island is Oparo.[1] Its area is 40 km2 with a population of almost 500 and a max elevation of 650 m. Its main town is Ahuréi.

Marotiri is a group of four uninhabited volcanic rocks protruding from the sea (and several submerged rocks), forming the southeastern end of the Austral Islands of French Polynesia. Marotiri is also known as Bass Rocks (Îlots de Bass in French),[2] maybe according to the name of the European explorer George Bass. Marotiri is very isolated,[3] located at Lua error in Module:Coordinates at line 668: callParserFunction: function "#coordinates" was not found., about 725 miles (1,167 km) west-south-westward of Pitcairn Island.[4] The closest island is Rapa Iti, 75 km further northwest, but separated from it by an ocean depth of more than 1,500 meters.[5] The rocks are part of the municipality of Rapa and uninhabitable by people. They form an important bird sanctuary.