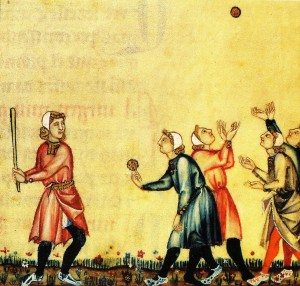 Bat-and-ball games (or safe haven games to avoid confusion with club games such as golf and hockey) are field games played by two opposing teams. The teams alternate between "batting" roles, sometimes called "in at bat" and "out in the field", or simply in and out. The fielding team defends, so only the batting team may score, but they have equal chances in both roles. The game is counted rather than timed.

A player on the fielding team puts the ball in play with a delivery whose restriction depends on the game. A player on the batting team attempts to strike the delivered ball, commonly with a "bat", which is a club governed by the rules of the game.

In modern Baseball the fielders put three players out; in cricket they retire all players but one.

Some games permit multiple runners and some have multiple bases to run in sequence. Batting may occur, and running begin, at one of the bases. The movement between those "safe havens" is governed by the rules of the particular game.

Globally, cricket and baseball are the two most popular games in the family.

Earliest reference to ball games comes to us from 500 BC, Gautama Buddha's list of games prohibited for monks. "khalika (dice games); ghaṭika (hitting a short stick with a long stick); salākahattha (a game played by dipping the hand in paint or dye, striking the ground or a wall, and requiring the participants to show the figure of an elephant, a horse etc.); akkha (ball games); paṅgacīra (blowing through toy pipes made of leaves); vaṅkaka (ploughing with miniature ploughs); mokkhacika (turning somersaults); ciṅgulika (playing with paper windmills); pattāḷaka (playing with toy measures)"

Striking the ball with a "bat" or any type of stick is not crucial. These games use the foot or hand. Otherwise their rules may be similar or even identical to baseball. The first two use a large (35 cm) soft ball.