Battersea Park is a 200 acre (83-hectare) green space at Battersea in the London Borough of Wandsworth in London. It is situated on the south bank of the River Thames opposite Chelsea, and was opened in 1858.[1]

The park occupies marshland reclaimed from the Thames and land formerly used for market gardens. 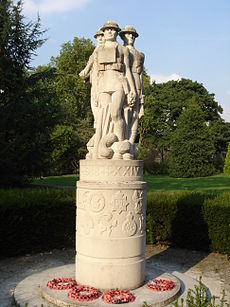 Prior to 1846 the area now covered by the park was known as Battersea fields, a popular spot for duelling. On 21 March 1829, the Duke of Wellington and the Earl of Winchilsea met on Battersea fields to settle a matter of honour.[2] When it came time to fire, the Duke aimed his duelling pistol wide and Winchilsea fired his into the air. Winchilsea later wrote the Duke a groveling apology.

Separated from the river by a narrow raised causeway, the fields consisted of low, fertile marshes intersected by streams and ditches with the chief crops being carrots, melons, lavender (all the way up to Lavender Hill) and the famous ‘Battersea Bunches’ of asparagus.

Running along the riverside from the fields were industrial concerns and wharves, including a pottery, copper works, lime kiln, chemical works, and, increasingly, railways. The site of Battersea Power Station was partly occupied by the famously bawdy Red House Tavern, patronised by Charles Dickens. Access was via the rickety wooden Battersea Bridge or by ferry from the Chelsea bank.

In 1845, spurred partly by the local vicar and partly by Thomas Cubitt, the builder and developer, whose yards were across the river in the still marshy and undeveloped area of Pimlico, a bill was submitted to Parliament to form a Royal Park of 320 acres. The Act was passed in 1846 and £200,000 was promised for the purchase of the land. The Commission for Improving the Metropolis acquired 320 acres of Battersea Fields, of which 198 acres became Battersea Park, opened in 1858, and the remainder was let on building leases.

The park was laid out by Sir James Pennethorne between 1846 and 1864, although the park which was opened in 1858 varied somewhat from Pennethorne's vision.

The park’s success depended on the successful completion of the Chelsea Bridge, declared open in 1858 by Queen Victoria. In her honour, the road alongside the eastern edge of the Park was called Victoria Road, linked to Queens Road by Victoria Circus (now Queen's Circus). Prince of Wales Road (now Prince of Wales Drive) was laid out along the southern boundary and Albert Bridge Road constructed along the western side.

The park hosted the first football game played under the rules of the recently formed Football Association on 9 January 1864.[3] The members of the teams were chosen by the President of the FA (A. Pember) and the Secretary (E.C. Morley) and included many well-known footballers of the day.

From the 1860s, the park was home to the leading amateur football team Wanderers F.C., winners of the first FA Cup, in 1872. One team they are known to have played at the park was Sheffield F.C., the world's oldest football team, in the 1860s.

In 1924, a war memorial by Eric Kennington was unveiled by Field Marshal Plumer and the Bishop of Southwark. It commemorates the over 10,000 men killed or listed as "missing presumed dead" whilst serving with the 24th East Surrey Division. It is now Grade II* listed.[4]

During both wars, anti-aircraft guns and barrage balloons were installed to help protect London from enemy air raids. Shelters were dug, part of the park was turned over to allotments for much needed vegetables and a pig farm was also set up. Maintenance of the park was reduced as the war effort took priority.[5] 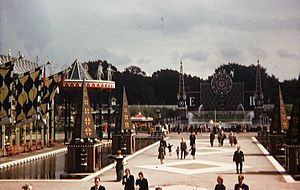 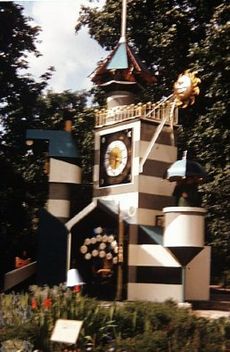 In 1951 the northern parts of the park were transformed into the "Pleasure Gardens" as part of the Festival of Britain celebrations. As well as a new water-garden and fountains, new features included a "Tree-Walk", which consisted of a series of raised wooden walkways linked by tree house-like platforms suspended between the branches of a number of trees.

Popular attractions included the Guinness Clock, designed by Jan Le Witt and George Him, and the Far Tottering and Oyster Creek Branch Railway. 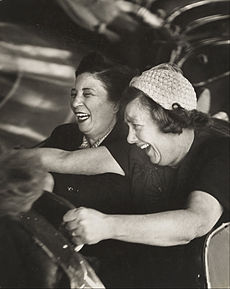 Another part of the transformation was the addition of Battersea Fun Fair, with rollercoasters, swings, roundabouts and other attractions.

The fun fair's most spectacular ride was a rollercoaster called The Big Dipper, which opened in 1951. It was of wooden construction and suffered a major fire in 1970. It was closed after five children were killed and 13 injured in an accident on 30 May 1972 when one of the trains became detached from the haulage rope, rolling back to the station (the anti-rollback mechanism having failed) and colliding with the other train.[6] This is the worst accident in the history of theme parks. The lack of a main attraction led to the decline in the popularity of the fun fair and its eventual closure in 1974.

After the closure, the "Jetstream" ride was sold to Trusthouse Forte, the then owners of Belle Vue Zoological Gardens in Manchester. A night scene at the funfair which was very ghostly and empty was in the opening title scene for the 1960s television series Journey to the Unknown.

Current features in the park

The site of the fun fair was levelled and became a site for travelling fairs and exhibitions, and is the site of Battersea Evolution,[7] formerly the Battersea Park Events Arena, which hosts exhibitions, conferences and Christmas parties.[8] 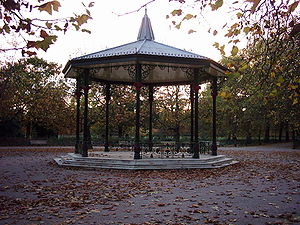 The bandstand in Battersea Park.

The park is home to a small children's zoo, a boating lake, a bandstand, and all-weather outdoor sporting facilities including tennis courts, a running track and football pitches. Four West London hockey teams use the all-weather Astroturf pitches, the most prominent being Wanderers Hockey Club.[1]

In the centre of the park is Pump House Gallery, which is housed in a four story grade I listed Victorian tower. It is owned by Wandsworth Council.[9]

On the western side there are two cricket pitches, home to the famous King's Road Cricket & Social Club. The club, whose members wear distinctive orange caps, can be seen playing on Saturdays and Sundays.

The park is the site of the London Peace Pagoda, erected in 1985. A replica of the bronze statue of a dog that was the focal point of the historic vivisection-related Brown Dog affair was erected here in 1985. It was moved in 1994 to the Woodland Walk, near the Old English Garden.[10]

In 2002-4 the park underwent an £11m refurbishment funded in part by the Heritage Lottery Fund, and was re-opened on 2 June 2004 by Prince Phillip.

In 2012, the park hosted one of the seven national Foodies Festivals[12] on 17–19 August.[citation needed] Masterclasses were performed by chefs such as Levi Roots and Ed Baines, with burlesque shows, restaurant tents, city beaches and pop-up cinemas. 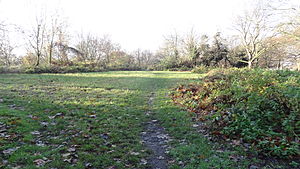 A narrow strip along the eastern edge of the park and two smaller nearby areas have been designated the Battersea Park Nature Areas Local Nature Reserve, with an area of three hectares. They have a variety of woodland bird species including blackcap and bullfinch. There are 20 species of butterfly and several of stag beetle. Other invertebrate species include the hoverfly Volucella zonaria.[13][14][15]

The park featured in Petula Clark's 1954 single "Meet Me In Battersea Park"., co-authored by Clark's father, Leslie, and her accompanist, Joe "Mr Piano" Henderson and David Valentine (the pen name of David Lavender). It was the title of a 2001 boxed set focusing on this early part of Petula's career.

The park featured in the 1960s films Gorgo, The Wrong Arm of the Law and The Day the Earth Caught Fire, and in a 1991 episode of Mr. Bean entitled "Mr Bean Goes to Town". Also, Jim Henson's company filmed the musical number "Couldn't We Ride?" for "The Great Muppet Caper" at the park; it was there that the movie began filming in September 1980.