Batting average is a statistic in cricket, baseball, and softball that measures the performance of batsmen in cricket and batters in baseball. The development of the baseball statistic was influenced by the cricket statistic.[1] 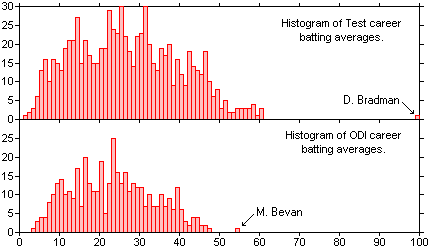 Most players have career batting averages in the range of 20 to 40. This is also the desirable range for wicket-keepers, though some fall short and make up for it with keeping skill. Until a substantial increase in scores in the 21st century due to improved bats and smaller grounds among other factors, players who sustained an average above 50 through a career were considered exceptional, and before the development of the heavy roller in the 1870s an average of 25 was considered very good.[2]

Career records for batting average are usually subject to a minimum qualification of 20 innings played or completed, in order to exclude batsmen who have not played enough games for their skill to be reliably assessed. Under this qualification, the highest Test batting average belongs to Australia's Sir Donald Bradman, with 99.94. Given that a career batting average over 50 is exceptional, and that only four other players have averages over 60, this is an outstanding statistic. The fact that Bradman's average is so far above that of any other cricketer has led several statisticians to argue that, statistically at least, he was the greatest sportsman in any sport.[3] As at 24 February 2016, Adam Voges of Australia has recorded an average of 95.50 from 21 innings played, but only 14 innings completed.

Batting averages in One Day International (ODI) cricket tend to be lower than in Test cricket,[4] because of the need to score runs more quickly and take riskier strokes and the lesser emphasis on building a large innings. It should also be remembered, especially in relation to the ODI histogram above, that there were no ODI competitions when Bradman played.

Batting averages can be strongly affected by the number of not outs. For example, Phil Tufnell, who was noted for his poor batting,[6] has an apparently respectable ODI average of 15 (from 20 games), despite a highest score of only 5 not out, as he scored an overall total of 15 runs from 10 innings, but was out only once.[7]

A different, and more recently developed, statistic which is also used to gauge the effectiveness of batsmen is the strike rate. It measures a different concept however – how quickly the batsman scores (number of runs from 100 balls) – so it does not supplant the role of batting average. It is used particularly in limited overs matches, where the speed at which a batsman scores is more important than it is in first-class cricket.

Henry Chadwick, an English statistician raised on cricket, was an influential figure in the early history of baseball. In the late 19th century he adapted the concept behind the cricket batting average to devise a similar statistic for baseball. Rather than simply copy cricket's formulation of runs scored divided by outs, he realized that hits divided by at bats would provide a better measure of individual batting ability. This is because while in cricket, scoring runs is almost entirely dependent on one's own batting skill, in baseball it is largely dependent on having other good hitters on one's team. Chadwick noted that hits are independent of teammates' skills, so used this as the basis for the baseball batting average. His reason for using at bats rather than outs is less obvious, but it leads to the intuitive idea of the batting average being a percentage reflecting how often a batter gets on base, whereas in contrary, hits divided by outs is not as simple to interpret in real terms.

In modern times, a season batting average higher than .300 is considered to be excellent, and an average higher than .400 a nearly unachievable goal. The last player to do so, with enough plate appearances to qualify for the batting championship, was Ted Williams of the Boston Red Sox, who hit .406 in 1941, though the best modern players either threaten to or actually do achieve it occasionally, if only for brief periods of time. There have been numerous attempts to explain the disappearance of the .400 hitter, with one of the more rigorous discussions of this question appearing in Stephen Jay Gould's 1996 book Full House.

For non-pitchers, a batting average below .230 is often considered poor, and one below .200 is usually unacceptable. This latter level is sometimes referred to as "The Mendoza Line", named for Mario Mendoza, a stellar defensive shortstop whose defensive capabilities just barely made up for his offensive shortcomings. The league batting average in Major League Baseball for 2004 was just higher than .266, and the all-time league average is between .260 and .275.

In rare instances, MLB players have concluded their careers with a perfect batting average of 1.000. John Paciorek had three hits in all three of his turns at bat. Esteban Yan went two-for-two, including a home run. Hal Deviney's two hits in his only plate appearances included a triple, while Steve Biras, Mike Hopkins, Chet Kehn, Jason Roach and Fred Schemanske also went two-for-two. A few dozen others have hit safely in their one and only career at-bat.

Sabermetrics, the study of baseball statistics, considers batting average a weak measure of performance because it does not correlate as well as other measures to runs scored, thereby causing it to have little predictive value. Batting average does not take into account walks or power, whereas other statistics such as on-base percentage and slugging percentage have been specifically designed to measure such concepts. Adding these statistics together form a player's On-base plus slugging or "OPS". This is commonly seen as a much better, though not perfect, indicator of a player's overall batting ability as it is a measure of hitting for average, hitting for power and drawing bases on balls.

In 1887, Major League Baseball counted bases on balls as hits. The result of this was skyrocketed batting averages, including some near .500, and the experiment was abandoned the following season.

Qualifications for the batting title

The Major League Baseball batting averages championships (often referred to as "the batting title") is awarded annually to the player in each league who has the highest batting average. Ty Cobb holds the MLB (and American League) record for most batting titles, officially winning 11 in his pro career.[9] The National League record of 8 batting titles is shared by Honus Wagner and Tony Gwynn. Most of Cobb's career and all of Wagner's career took place in what is known as the Dead-Ball Era, which was characterized by higher batting averages and much less power, whereas Gwynn's career took place in the Live-Ball Era.

To determine which players are eligible to win the batting title, the following conditions have been used over the sport's history:[10]

From 1967 to the present, if the player with the highest average in a league fails to meet the minimum plate-appearance requirement, the remaining at-bats until qualification (e.g., 5 ABs, if the player finished the season with 497 plate appearances) are hypothetically considered hitless at-bats; if his recalculated batting average still tops the league, he is awarded the title. This is officially called Rule 10.22(a), but it is also known as the Tony Gwynn rule because the Padres' legend won the batting crown in 1996 with a .353 average on just 498 plate appearances (i.e., was four shy). Gwynn was awarded the title since he would have led the league even if he'd gone 0-for-4 in those missing plate appearances. His average would have dropped to .349, five points better than second-place Ellis Burks' .344.[11] In 2012, a one-time amendment to the rule was made to disqualify Melky Cabrera from the title. Cabrera requested that he be disqualified after serving a suspension that season for a positive testosterone test. He had batted .346 with 501 plate appearances, and the original rule would have awarded him the title over San Francisco Giants teammate Buster Posey, who won batting .336.[12][13]

Following from usage in cricket and baseball, batting average has come to be used for other statistical measures of performance and in the general usage on how a person did in a wide variety of actions.

An example is the Internet Archive, which uses the term in ranking downloads. Its "batting average" indicates the correlation between views of a description page of a downloadable item, and the number of actual downloads of the item. This avoids the effect of popular downloads by volume swamping potentially more focused and useful downloads, producing an arguably more useful ranking.