Battle is a small town and civil parish in the local government district of Rother in East Sussex, England. It lies 55 miles (89 km) south southeast of London, 32 miles (51 km) east of Brighton and 24 miles (39 km) east of the county town of Lewes. Nearby towns include Hastings to the southeast and Bexhill-On-Sea to the south.

It is the site of the Battle of Hastings, where William, Duke of Normandy, defeated King Harold II to become William I in 1066.

Battle is situated in the heart of the Sussex Weald in the designated High Weald Area of Outstanding Natural Beauty.

The population of the civil parish was 6,048 according to the 2001 census, increasing to 6,673 a the 2011 Census.[2] Battle has two senior schools, Claverham Community College and Battle Abbey. 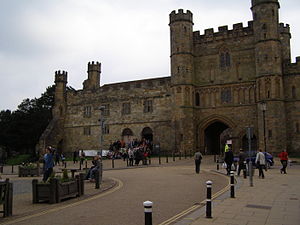 Battle Abbey was founded to commemorate the battle, and dedicated in 1095. The high altar of the Abbey church was reputedly on the spot where Harold died. The Abbey gateway is still the dominant feature of the south end of the main street, although little remains of the rest of the Abbey buildings. The remaining cloisters, part of the west range, were leased to Battle Abbey School shortly after World War I, and the school remains in occupancy to this day.

The abbey at Battle has been known for centuries as Battle Abbey. It and the abbey church were initially dedicated to Saint Martin, sometimes known as "the Apostle of the Gauls", and named in his honour.

A modern shopping development designed to blend in with the town.

The town of Battle was gradually built around the Abbey, and later developed a reputation for the quality of the gunpowder produced in the area. In the mid 18th century, the town supported five watchmakers in the High Street. Today, Battle is known as a tourist destination. 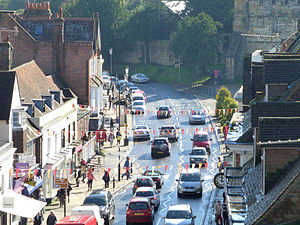 The local bonfire society, Battel Bonfire Boyes, is claimed to be the oldest of the Sussex Bonfire Societies.[3] The importance of Bonfire Night in Battle is that it is located in the wooded Weald of Sussex. Most of the area was heavily wooded, which provided oak and other timbers for Navy Shipyards, power for making cannons (shipped to Portsmouth or Chatham), cannonballs and gunpowder.

Battle was the birthplace in 1799 of Eliza Acton, author of the pioneering cookery book Modern Cookery for Private Families (1845) This continued to sell well for the rest of the century. Its lists of ingredients, cooking times and other innovations also provided a model for the cookery section of the bestselling Mrs Beeton's Book of Household Management (1861).[4]

Battle was a refuge in World War I, and tunnels still exist, leading from various fields and cellars to Battle Abbey itself. However, they are deemed unsafe and are now closed.[citation needed]

The first gunpowder mill in Battle was built in 1676 when John Hammond was granted permission to build a mill on land owned by the Abbey. A gunpowder works was located in Powdermill Lane - the remains of which have been converted into a hotel. In 1722 Daniel Defoe described the town as being "remarkable for little now, but for making the finest gun-powder, and the best perhaps in Europe".[5] The Duke of Cleveland refused to renew the licence in 1847 after many mishaps,[6] including one occasion in 1798 on which more than 15 tonnes of gunpowder were left in the oven for too long and exploded.

Battle is governed at the lowest level by Battle Town Council, consisting of seventeen elected councillors who meet on the third Tuesday of each month. The council is responsible for street lighting, allotments and recreational areas. It provides a local voice to the district and county councils.[7] The council is split into four wards: Marley, Netherfield, Telham and Watch Oak. Marley ward was the only one of these contested in the 2007 election.[8] The vacant seats in the remaining wards have subsequently been filled by co-option.

Rother District council provides the next level of government with services such as refuse collection, planning consent, leisure amenities and council tax collection. The parish of Battle falls within three wards. The main town of Battle makes up Battle town ward. The south eastern area of the parish, which includes the village of Telham, lies within Crowhurst ward. The north western area, which includes the village of Netherfield, lies within Darwell ward. Crowhurst ward provides a single councillor, the other two wards provide two councillors to Rother District council. In the May 2007 election, Battle town ward elected two Liberal Democrats,[9] Darwell ward elected one Conservative and one independent councillor.[10] Crowhurst ward was won by the Conservative candidate.[11] The electoral ward for this area had a population at the 2011 census of 5,312.[12]

East Sussex county council is the third tier of government, providing education, libraries and highway maintenance. Battle falls within the Battle and Crowhurst ward. Kathryn Margaret Field, Liberal Democrat, was elected in the May 2005 election with 48.8% of the vote.[13]

At European level, Battle is represented by the South-East region, which holds ten seats in the European Parliament. The June 2004 election returned four Conservatives, two Liberal Democrats, two UK Independence, one Labour and one Green, none of whom lives in East Sussex.[14] 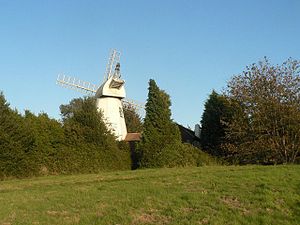 Telham Hill is c. one mile (1.6 km) south-east of Senlac Hill, in East Sussex, England. It was from Telham Hill that William the Conqueror's army first caught sight of the English army forming up on Senlac Hill, for the battle of Hastings, 14 October 1066.

There are three Sites of Special Scientific Interest within the parish.

Blackhorse Quarry, a site of palaeontological interest which has produced many fossil bones and teeth including Iguanodon and crocodiles.[15]

Darwell Wood is partially within the parish which is another site of biological importance as an example of hornbeam coppice with oak standards.[17]

Battle railway station (designed by William Tress) lies on the Hastings Line, north of Crowhurst and south of Robertsbridge. There was once a station known as Mountfield Halt between Battle and Robertsbridge but this closed on 6 October 1969.

The station is managed by and the services are provided by Southeastern.

In Anthony Burgess' novel "Earthly Powers", Battle is the hometown of its main character, Kenneth Toomey, where Toomey's father has a dental surgery.

Three members of the alternative rock band Keane - Tom Chaplin, Tim Rice-Oxley and Richard Hughes grew up here in Battle. In a song called Sovereign Light Cafe from their album Strangeland, places in Battle are mentioned - "down Powdermill Lane and the Battlegrounds". In another earlier song, Snowed Under, the B-side to the famous Somewhere Only We Know, the nearby woods "Manser's Shaw" is mentioned too.

Battle is twinned with: