From Infogalactic: the planetary knowledge core
Jump to: navigation, search
This article is about the abbey in England. For the historic structure in Richmond, Virginia, known as "Battle Abbey", see Virginia Historical Society. 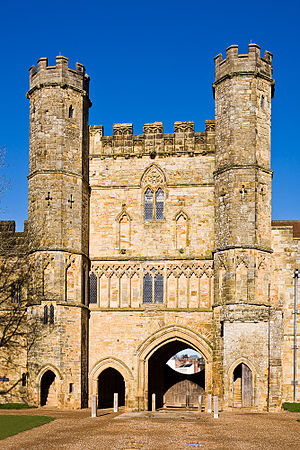 Battle Abbey is a partially ruined abbey complex in the small town of Battle in East Sussex, England. The abbey was built on the scene of the Battle of Hastings and dedicated to St. Martin.[1]

1066 Battle of Hastings, Abbey and Battlefield

The Grade I listed site is now operated by English Heritage as 1066 Battle of Hastings, Abbey and Battlefield, which includes the abbey buildings and ruins, a visitor centre with a film and exhibition about the battle, audio tours of the battlefield site, and the monks' gatehouse with recovered artefacts. The visitor centre includes a children's discovery room and a café, and there is an outdoor themed playground. 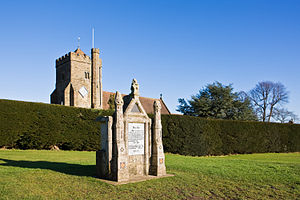 In 1070 Pope Alexander II ordered the Normans to do penance for killing so many people during their conquest of England. In response, William the Conqueror vowed to build an abbey where the Battle of Hastings had taken place, with the high altar of its church on the supposed spot where King Harold fell in that battle on Saturday, 14 October 1066. He started building it, dedicating it to St. Martin, sometimes known as "the Apostle of the Gauls," though William died before it was completed. Its church was finished in about 1094 and consecrated during the reign of his son William Rufus. William the Conqueror had ruled that the Church of St Martin of Battle was to be exempted from all episcopal jurisdiction, putting it on the level of Canterbury. It was remodelled in the late 13th century but virtually destroyed during the Dissolution of the Monasteries under King Henry VIII. 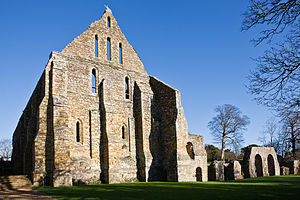 At the time of the Dissolution, the monks of Battle Abbey were provided with pensions, including the abbot John Hamond and the prior Richard Salesherst, as well as monks John Henfelde, William Ambrose, Thomas Bede and Thomas Levett, all bachelors in theology. 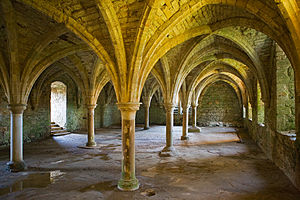 Following the dissolution, parts of Battle Abbey became a private home, and other parts of the monastic buildings were ravaged for building materials. Sir Thomas Webster, MP and baronet (1677–1751, created a baronet 1703, baronetcy extinct 1923), married the heiress Jane Cheek (granddaughter of a wealthy merchant, Henry Whistler, to whose vast inheritance she succeeded in 1719). In 1719, he bought Battle Abbey from Sir Henry Whistler, and was succeeded by his son, Sir Whistler Webster, 2nd baronet (died 1779, leaving a widow, but no children; whereupon he was succeeded in the baronetcy by his brother). Battle Abbey remained in the Webster family until 1858, when it was sold by the sixth baronet, who died in 1853, to Lord Harry Vane, later Duke of Cleveland. On the death of the Duchess of Cleveland in 1901, the estate was bought back by Sir Augustus Webster, 7th baronet. It was an all-girls boarding school when Canadian troops were stationed there during the Second World War, and continues as a school now. Sir Augustus (son of Sir Augustus, 7th baronet) was born in 1864 and succeeded his father as 8th baronet in 1886. In 1895, he married the only daughter of Henry Crossley of Aldborough Hall, Bedale. Sir Augustus was formerly a captain in the Coldstream Guards. The descendants of Sir Augustus Webster, 7th and last baronet (died 1923), finally sold Battle Abbey to the British government in 1976 and it is now in the care of English Heritage. 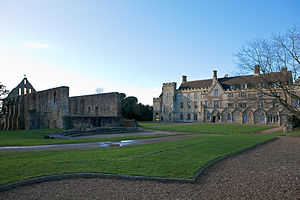 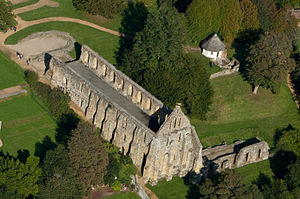 An aerial view of the Dorter.

All that is left of the abbey church itself today is its outline on the ground, but parts of some of the abbey's buildings are still standing: those built between the 13th and 16th century. These are still in use as the independent Battle Abbey School.[2] Visitors to the abbey usually are not allowed inside the school buildings, although during the school's summer holidays, access to the abbot's hall is often allowed.

The church's high altar reputedly stood on the spot where Harold died. This is now marked by a plaque on the ground, and nearby is a monument to Harold erected by the people of Normandy in 1903. The ruins of the abbey, with the adjacent battlefield, are a popular tourist attraction, with events such as the Battle of Hastings reenactments.

In 1989, the rock band Black Sabbath filmed a music video here for the title track from their 1989 album, Headless Cross. [3]