From Infogalactic: the planetary knowledge core
Jump to: navigation, search
This article is about the 1944 Battle for Brest in France. For other uses, see Battle of Brest.

The Battle for Brest was one of the fiercest battles fought on the Western Front during World War II. Part of the Allied plan for the invasion of mainland Europe called for the capture of port facilities, in order to ensure the timely delivery of the enormous amount of war materiel required to supply the invading Allied forces. It was estimated that the 37 Allied divisions to be on the continent by September 1944 would need 26,000 tons of supplies each day.[1] The main port the Allied forces hoped to seize and put into their service was Brest, in northwestern France.

A major issue was of course how to supply the invasion army with the tens of thousands of tons of materiel it would need after it landed. The capture of ports in the European Atlantic coast was a necessity, and the most suitable ones were clear invasion objectives. The capture of these port facilities was deemed crucial, because the lack of supplies would easily strand an invading army. For the initial phase of the battle, large artificial ports (Mulberry Harbors) would be erected by the beaches, but they had limited tonnage unloading capabilities, and were considered just as a contingency until real ports could be captured and put into service.

Suitable ports could be found along the northern coast of France, across the English Channel which would be crossed by the invading armies, in particular the port of Brest in Brittany, for a long time the main French Fleet harbor in the Atlantic coast and the westernmost port in France. The Allied strategists even considered it possible that, after its capture, supplies could arrive directly from the US to Brest, bypassing England and reaching the Allied Armies moving east, towards Germany, much faster.

Other ports across the English Channel were Saint Malo, Lorient, and Saint Nazaire in Brittany and Cherbourg and Le Havre in Normandy (which would eventually be selected as the Invasion area). Operation Sledgehammer, the capture of Cherbourg, had been considered by the Allies, but it was cancelled after the disastrous 1942 Dieppe Raid. It was decided that a direct attack to a port from the sea was not an option.

However, the Germans, realizing this, began building fortifications around these ports earlier in the war through their Organization Todt, as part of the Atlantic Wall concept. Some of these ports were major U-boat bases as well, and had bomb-proof concrete sub pens built. These fortifications had been surviving Allied air strikes for some time. 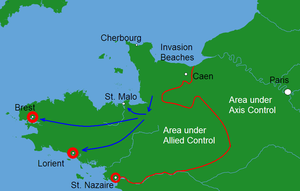 NW France by mid-August, 1944. The Allies manage to occupy the Breton countryside and are already moving east towards Paris. The blue arrows represent the approach routes to Brest and other ports

Soon after Normandy was invaded, the Mulberries were towed from England and deployed in the French coast. Unfortunately for the Allies, one of them was destroyed in a storm after less than two weeks. Supplies were then mainly landed directly via the beaches, but this process was not as efficient.

Cherbourg, at the tip of the Cotentin Peninsula in Normandy, was captured by the Americans who landed on Utah Beach, but the German garrison destroyed its harbour facilities before surrendering. Cherbourg was so far the only major port in the Allied invasion area. Soon after, the Germans in the peninsula of Brittany were isolated by a north-south breakthrough accomplished by George S. Patton's Third United States Army, exploiting the success of Operation Cobra, and US VIII Corps was diverted into Brittany to capture Brest and secure the northern flank of the breakthrough. Wehrmacht troops trapped in Brittany retreated to the fortified ports in the peninsula, as US Third Army troops moved in and surrounded them. The Brest garrison, Festung Brest, meaning "Fortress Brest", as the German propaganda referred to surrounded cities, was put under the command of General der Fallschirmtruppe Hermann-Bernhard Ramcke, a paratroop veteran of the Afrika Korps. His forces consisted of the German 2nd Parachute Division, 266th Infantry Division, 344th Infantry Division and other Wehrmacht elements, in all some 40,000 fighting men.

The old fortress city of Saint-Malo was captured by 83rd Infantry Division ("Ohio") on 17 August, but its small port facilities were sabotaged by the defenders. A German garrison stationed at nearby Cézembre Island surrendered only after days of heavy shelling by warships and strong air strikes, when their naval guns were already disabled. The aerial bombing of the island marked one of the first uses of napalm bombs. It was clear that the Germans would deny the Allies the use of French ports as long as possible by defending the fortresses built around them and severely damaging their docks.

Brest was reached by American troops on 7 August 1944.

File:Brest44.jpg
A GI runs in the streets of Brest

Brest was surrounded and eventually stormed by the U.S. VIII Corps. The fight proved extremely difficult, as the German garrison was well entrenched and partially made up of elite Fallschirmjäger (paratroopers) forces. 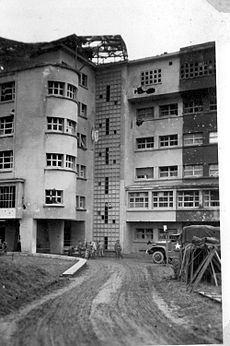 The German paratroopers lived up to their reputation, as the Allies had experienced previously in battles such as Monte Cassino. Whilst some less capable units surrendered quite easily, the Fallschirmjäger defended their ground under considerable odds, heavy shelling, air strikes and American assaults. The attackers had heavy losses for every small advance they made into the city.

As per their military doctrine, the Americans tried to use their superior artillery firepower and air superiority to overcome the defenders, instead of fighting them hand-to-hand. The Germans had stocked a considerable amount of ammunition for the defense of the city and had weapons of all calibers (from light flak to naval guns) dug in fortifications and in pillboxes. Elements of the specialised British 79th Armoured division came in to attack the heavily fortified Fort Montbarey. Flame throwing Churchill Crocodile tanks along with US infantry took three days to overcome the fort.

The fighting was intense, the troops moving house to house. The fortifications (both French and German built) proved very difficult to overcome, and heavy artillery barrages were fired by both sides.

Eventually the old city of Brest was razed to the ground during the battle, with only some old medieval stone-built fortifications left standing.

General Ramcke surrendered the city on 19 September 1944 to the Americans after rendering the port facilities useless. These would not be repaired in time to help the war effort as it was hoped. By this time, Paris had already been liberated by the Allied Armies, and Operation Market-Garden was already under way in the Netherlands.

"These Are My Credentials"

When U.S. Brigadier General Charles Canham arrived to accept his surrender, General Ramcke asked the lower-ranking man to show his credentials. Canham pointed to his nearby troops and said "These are my credentials". Canham was at the time the deputy commander of the U.S. 8th Infantry Division, and that phrase has become the division's motto.

The reason Ramcke asked was that he was stalling for time, as in one of the bunker rooms he had a radio operator frantically sending out his last report from Fortress Brest (which included a number of award recommendations). In the end he was able to keep the Americans busy long enough that they did not discover the radio room until the dispatch had been sent.

The costly capture of Brest resulted in the decision to only surround the remaining German-occupied ports in France with the exception of those that could be captured from the march, instead of storming them in a set-piece battle. The exception was Le Havre, which was taken by the British 2nd Army on 12 September 1944. Some of these Breton ports surrendered only by 9 May 1945, one day after Victory in Europe Day.

The whole Overlord campaign developed somewhat differently than originally planned. Patton's US Third Army's quick advance allowed the Liberation of Paris earlier than expected, but by September 1944 supplies were beginning to run short.

Cherbourg was the only port that was repaired in time to be used. The port's capacity was approximately 2,000 tons a day in mid-July and 12,000 tons by August 1944.

Decision was made to favor the British forces under Sir Bernard Law Montgomery by reducing the supplies to other forces, including Patton's. The unsuccessful Operation Market Garden launched by Montgomery soon after, however, did not allow the Allies to resume their rapid advance which was being stalled at Antwerp in Belgium.[2] The Germans were able to reorganize and even counterattack (the Battle of the Bulge). By then, however, the region of Antwerp was secured, its port operating and supplying the Allies.

After the war, the West German government paid reparations to civilians in Brest who had been killed, starved, or left homeless.[citation needed]

If more supplies could have been delivered through intact French ports to British and American forces, the Allies could have potentially invaded the industrialized western part of Germany before the winter of 1944–45, bringing the Third Reich to an earlier collapse. On the other hand, further developments in World War II indicated that the logistics of carrying supplies across France by land was also a great obstacle, due to insufficient numbers of trucks and the destruction of the railroad network (see Red Ball Express). The delay in the invasion of Europe (postponed from 1943 to 1944 due to the lack of LCTs) had allowed the Germans time to reinforce their coastal defense system (known as the "Atlantic Wall"). The ports' fortifications made the reality the soldiers found around them much different in 1944 than the one the planners foresaw back in 1942, when they believed these ports could be captured relatively intact and used accordingly.