The Battle of Al Mansurah was fought from February 8 to February 11, 1250, between Crusaders led by Louis IX, King of France, and Ayyubid forces led by Emir Fakhr-ad-Din Yusuf, Faris ad-Din Aktai and Baibars al-Bunduqdari.

By the mid-13th century, the Crusaders became convinced that Egypt, the heart of Islam's forces and arsenal,[5] was an obstacle to their ambition to capture Jerusalem, which they had lost for the second time in 1244. In 1245, during the First Council of Lyon, Pope Innocent IV gave his full support to the Seventh Crusade being prepared by Louis IX, King of France.

The goals of the Seventh Crusade were to destroy the Ayyubid dynasty in Egypt and Syria, and to recapture Jerusalem. The Crusaders asked the Mongols to become their allies against the Muslims,[6] the Crusaders attacking the Islamic world from west, and the Mongols attacking from the east. Güyük, the Great Khan of the Mongols, told the Pope's envoy that the Pope and the kings of Europe should submit to the Mongols.[7]

The ships of the Seventh Crusade, led by King Louis's brothers, Charles d'Anjou and Robert d'Artois, sailed from Aigues-Mortes and Marseille to Cyprus during the autumn of 1248, and then on to Egypt. The ships entered Egyptian waters and the troops of the Seventh Crusade disembarked at Damietta in June 1249. Louis IX sent a letter to as-Salih Ayyub.[8] Emir Fakhr ad-Din Yusuf, the commander of the Ayyubid garrison in Damietta, retreated to the camp of the Sultan in Ashmum-Tanah,[9] causing a great panic among the inhabitants of Damietta, who fled the town, leaving the bridge that connected the west bank of the Nile with Damietta intact. The Crusaders crossed over the bridge and occupied Damietta, which was deserted.[10] The fall of Damietta caused a general emergency (called al-Nafir al-Am النفير العام) to be declared, and locals from Cairo and from all over Egypt moved to the battle zone.[11][12] For many weeks, the Muslims used guerrilla tactics against the Crusader camps; many of the Crusaders were captured and sent to Cairo.[13] As the Crusader army was strengthened by the arrival of Alphonse de Poitiers, the third brother of King Louis IX, at Damietta, the Crusaders were encouraged by the news of the death of the Ayyubid Sultan, as-Salih Ayyub. The Crusaders began their march towards Cairo. Shajar al-Durr, the widow of the dead Sultan, concealed the news for some time and sent Faris ad-Din Aktai to Hasankeyf to recall Turanshah, the son and heir, to ascend the throne and lead the Egyptian army.

The Crusaders approached the battle by the canal of Ashmum (known today by the name Albahr Alsaghir), which separated them from the Muslim camp. An Egyptian showed the Crusaders the way to the canal shoals. The Crusaders, led by Robert of Artois, crossed the canal with the Knights Templar and an English contingent led by William of Salisbury, launching a surprise assault on the Egyptian camp in Gideila, two miles (3 km) from Al Mansurah,[14] and advancing toward the royal palace in Al Mansurah. The leadership of the Egyptian forces passed to the Mamluks Faris Ad-Din Aktai and Baibars al-Buduqdari who contained the attack and reorganized the Muslim forces. This was the first appearance of the Mamluks as supreme commanders inside Egypt.[15] Shajar al-Durr, who had full control of Egypt, agreed with Baibars' plan to defend Al Mansurah.[16] Baibars ordered the gate be opened to let the Crusaders enter the town. The crusaders rushed in, thinking the town deserted, only to find themselves trapped inside. The Crusaders were besieged from all directions by Egyptian forces and the local population, and they took heavy losses. Robert of Artois, who took refuge in a house,[17][18] and William of Salisbury were both killed along with most of the Knights Templar. Only five Templar Knights escaped alive.[19] The Crusaders retreated to their camp in disorder, and surrounded it with a ditch and wall. Early on the morning of February 11, the Muslim forces launched a devastating offensive against the Frankish camp. On February 27, the new sultan Turanshah arrived in Al Mansurah to lead the Egyptian army, and the death of as-Salih Ayyub was formally announced in Egypt.[20] Ships were transported overland and dropped in the Nile behind the Crusader ships blocking the reinforcement line from Damietta. The Egyptians used Greek fire, destroying and seizing many Crusader supply vessels. The besieged Crusaders soon began suffering from famine and disease. Some Crusaders deserted to the Muslim side.[21][22]

Despite being overwhelmed and ultimately defeated, King Louis IX tried to negotiate with the Egyptians, offering the surrender of the Egyptian port of Damietta in exchange for Jerusalem and a few towns on the Syrian coast. The Egyptians rejected the offer, and the Crusaders retreated to Damietta under cover of darkness on April 5, followed closely by the Muslim forces. At the subsequent Battle of Fariskur, the last major battle of the Seventh Crusade, the Crusader forces were annihilated and King Louis IX was captured on April 6. Meanwhile, the Crusaders were circulating false information in Europe, claiming that King Louis IX defeated the Sultan of Egypt in a great battle, and Cairo had been betrayed into Louis's hands.[23][24] Later, when the news of Louis IX's capture and the French defeat reached France, the Shepherds' Crusade movement occurred in France.[25] 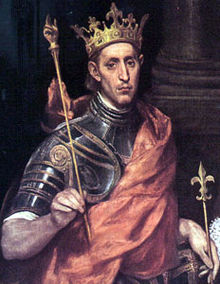 According to medieval Muslim historians, 15,000 to 30,000 French fell on the battlefield and thousands were taken prisoners.[26] Louis IX of France was captured in the nearby village of Moniat Abdallah (now Meniat el Nasr), chained and confined in the house of Ibrahim Ibn Lokman, the royal chancellor, and under the guard of a eunuch named Sobih al-Moazami.[27] The king's brothers, Charles d'Anjou and Alphonse de Poitiers, were taken prisoner at the same time, and were carried to the same house with other French nobles. The sultan provided for their subsistence. A camp was set up outside the town to shelter the rest of the prisoners. Louis IX was ransomed for 400,000 dinars. After pledging not to return to Egypt, Louis surrendered Damietta and left for Acre with his brothers and 12,000 war prisoners whom the Egyptians agreed to release.[28]

The battle of Al Mansurah was a source of inspiration for writers and poets of that time. One of the satiric poems ended with the following verses: "If they (the Franks) decide to return to take revenge or to commit a wicked deed, tell them :The house of Ibn Lokman is intact, the chains still there as well as the eunuch Sobih". —from stanza by Jamal ad-Din ibn Matruh. [29]

The name of Al Mansurah (Arabic: "the Victorious") that dates from an earlier period[30] was consolidated after this battle. The city still holds the name of Al Mansurah today, as the capital of the Egyptian governorate, Daqahlia. The National Day of Daqahlia Governorate (capital Al Mansurah) on February 8, marks the anniversary of the defeat of Louis IX in 1250. The house of Ibn Lokman, which is now the only museum in Al Mansurah, is open to the public and houses articles that used to belong to the French monarch, including his personal thirteenth century toilet.

The 1246 letter of Güyük to Pope Innocent IV.

The Seventh Crusade's defeat in Egypt in 1250 marked a turning point for all the existing regional parties. Egypt again proved to be Islam's stronghold. Western kings, except Louis IX, lost interest in launching new crusades. The Seventh Crusade was the last major crusade against Egypt and the Crusaders never recaptured Jerusalem.

Shortly after the defeat of the Seventh Crusade, the Ayyubid Sultan Turanshah was assassinated at Fariskur. The Mamluks, those who defended Al Mansurah and prevented Louis IX from advancing to Cairo, became the ruling power in Egypt, ending the Ayyubid rule in that country. The southern and eastern Mediterranean basin was divided among four main dominions. Mamluk Egypt, Ayyubid Syria, Franks of Acre with their Christian strongholds on the Syrian coast, and the Levantine Christian Armenian Kingdom of Cilicia. The Ayyubids of Syria clashed with the Mamluks of Egypt. The Franks, the Cilician Armenians and the Principality of Antioch formed a western Christian alliance.