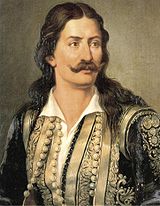 The Battle of Alamana was fought between the Greeks and the Ottoman Empire during the Greek War of Independence on April 22, 1821.[1]

Omer Vrioni, the commander of the Ottoman army, advanced with 8,000 men from Thessaly to crush the revolt that had broken out in Peloponnesos. Athanasios Diakos (he was an ex-deacon (Diakos: Gr. for deacon) who then became a trainee monk but gave it up for the War of Independence), Panourgias Panourgias and Yiannis Dyovouniotis with their bands of armatoloi (a total of perhaps 1,500 men) took up defensive positions at the river Alamana (Spercheios - the alternative name for the river is a misnomer as the local memory confused Brennus' men (287 BC) with Allamani), near Thermopylae.

Eventually, Diakos himself was captured and taken to Vrioni after he was shot in the foot and had his sword broken. When Vrioni offered to make Diakos an officer in his army, Diakos immediately refused and replied:

"I was born a Greek and I will die a Greek".

Vrioni then ordered that Diakos be impaled on a spit and roasted over a fire (the part about "being roasted" is questioned as local oral tradition has it that he was killed (freed from his torment) by a Greek rebel the next day). The Ottomans tried to make Diakos carry the long spit, but he threw it down with contempt. As he was led off to die, onlookers heard him sing:

"Look at the time Charon chose to take me, now that branches are flowering, now that the earth sends forth grass".

[2] Diakos's song was in reference to the Greeks' uprising against the Ottoman Empire.

Even though the battle was ultimately a military defeat for the Greeks, Diakos's death provided the Greek national cause with a stirring myth of heroic martyrdom.