The Battle of Annual was fought on July 22, 1921, at Annual in Spanish Morocco, between the Spanish Army of Africa and Berber combatants of the Rif region during the Rif War. The Spanish suffered a major military defeat, almost always referred to by the Spanish as the Disaster of Annual, which led to major political crises and a redefinition of Spanish colonial policy toward the Rif.

In early 1921 the Spanish Army commenced an offensive into northeastern Morocco from the coastal regions they already held. The advance took place without extended lines of communication being adequately established or the complete subjugation of the areas occupied.

On July 22, 1921, after five days of siege, Spanish forces under the command of general Manuel Fernández Silvestre garrisoning the encampment of Annual were attacked and destroyed by Riffi irregular forces commanded by Muhammad Ibn 'Abd al-Karim al-Khattabi (usually known as Abd el Krim), a former civil servant at the Spanish administration in the Office of Indigenous Affairs in Melilla and one of the leaders of the tribe of the Aith Ouriaghel.

The overextended Spanish military structure in the Western Spanish Protectorate in Morocco crumbled. After the battle, the Riffian Berbers began to advance eastward, where they overran more than 130 Spanish military posts.[7] The Spanish garrisons were destroyed without mounting a coordinated response to the attacks. At the end of August 1921, Spain had lost all the territories it had gained in the area since 1909.[7] General Silvestre disappeared and his remains were never found. One version claims that Spanish Sergeant Francisco Basallo Berrcerra of the Kandussi garrison, who survived the Dar Quebdani massacre, identified the remains of Silvestre by its scars. A Moorish courier from Kaddur Namar claimed that, eight days after the battle, he saw the corpse of the general lying face down on the battlefield.[8]

At Afrau, on the coast, Spanish warships were able to evacuate the garrison. At Zoco el Telata de Metalsa in the south, Spanish troops and civilians were able to retreat to the French Zone. Spanish survivors of the battle retreated some 80 km to the encampment of Monte Arruit, where a stand was attempted under the command of General Felipe Navarro y Ceballos-Escalera. As this position was surrounded and cut off from supplies, General Dámaso Berenguer Fusté, Spanish High Commissioner in the protectorate, authorized surrender on August 9. The Rifeños did not respect the conditions of surrender and killed many refugees within the fort. General Navarro was taken prisoner, along with 534 military and 53 civilians.[9]

Melilla was only some 40 km away, but was in no position to help: the city was almost defenceless and lacked properly trained troops. The Spanish quickly reinforced Melilla with 14,000 men from the Spanish Legion.[10] Abdelkrim did not have enough men to lay siege to the city, and he decided not to attack; citizens of western European nations were living in Melilla, and he did not wish to risk international disapproval.[10] He later stated that this was his biggest mistake.[11]

Spain quickly assembled elite units of the Army of Africa which had been operating south of Tetuan in the Western Zone. These mainly comprised Spanish Legion and Moroccan Regulares newly recruited in 1920. Transferred to Melilla by sea, these reinforcements enabled the city to be held and Monte Arruit to be retaken by the end of November. 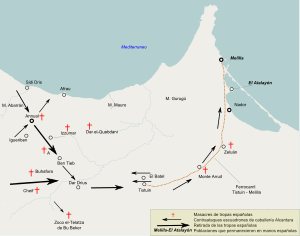 Map showing the retreat of the Spanish troops to Melilla after the battle of Annual. Locations of Spanish posts with high casualty numbers are marked with red crosses.

The political crisis brought about by this disaster led Indalecio Prieto to say in the Congress of Deputies: "We are at the most acute period of Spanish decadence. The campaign in Africa is a total, absolute failure of the Spanish Army, without extenuation." The Minister of War ordered the creation of an investigative commission, led by General Juan Picasso González, which developed the report known as Expediente Picasso. The report detailed numerous military mistakes, but owing to the obstructive action of various ministers and judges, did not go so far as to lay political responsibility for the defeat.

Popular opinion widely placed the blame for the disaster upon King Alfonso XIII, who according to several sources had encouraged Silvestre's irresponsible penetration to positions far from Melilla without having adequate defenses in his rear. Alfonso's apparent indifference – vacationing in southern France, he reportedly said "Chicken meat is cheap" when informed of the disaster[16] – led to a popular backlash against the monarchy. The crisis was one of the many that, over the course of the next decade, undermined the Spanish monarchy and led to the rise of the Second Spanish Republic.