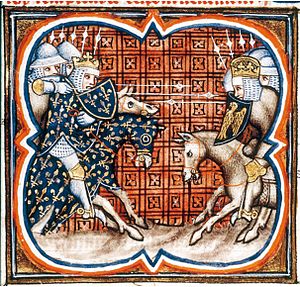 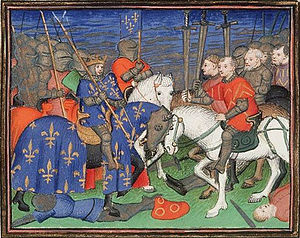 King Philip II of France's victory at Bouvines, by Vincent of Beauvais 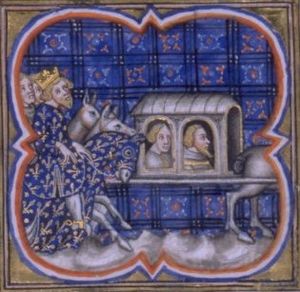 The Battle of Bouvines, which took place on 27 July 1214, was a medieval battle which ended the 1202–1214 Anglo-French War. It was fundamental in the early development of France in the Middle Ages by confirming the French crown's sovereignty over the Angevin lands of Brittany and Normandy.

Philip Augustus of France defeated an army consisting of Imperial German, English and Flemish soldiers, led by Otto IV of Germany. Other leaders included Count Ferrand of Flanders, William de Longespee and Renaud of Boulogne. The defeat was so decisive that Otto was deposed and replaced by Frederick II Hohenstaufen; Ferrand and Renaud were captured and imprisoned and King John of England was forced to agree to the Magna Carta by his discontented barons. Philip was himself able to take undisputed control of most of the territories in France that had belonged to King John of England, Otto's maternal uncle and ally.

In 1214, Ferdinand, Infante of Portugal, and Count of Flanders desired the return of the cities of Aire-sur-la-Lys and Saint-Omer, which he had recently lost to Philip II, King of France in the Treaty of Pont-à-Vendin. He thus broke allegiance with Philip and assembled a broad coalition including Emperor Otto IV, King John I of England, Duke Henry I of Brabant, Count William I of Holland, Duke Theobald I of Lorraine, and Duke Henry III of Limburg.

The campaign was planned by John, who was the fulcrum of the alliance; his plan was to draw the French away from Paris southward towards his forces and keep them occupied, while the main army, under Emperor Otto IV, marched on Paris from the north. John's plan was carried out at first, but the allies in the north moved slowly. John, after two encounters with the French, retreated to Aquitaine on 3 July.

On 23 July, after having summoned all his vassals, Philip had an army consisting of 4,000 cavalry and 11,000-foot soldiers.[3] The emperor finally succeeded in concentrating his forces at Valenciennes, although John was out of the picture, and in the interval Philip Augustus had counter marched northward and regrouped. Philip now took the offensive himself, and in maneuvering to get a good cavalry ground upon which to fight he offered battle (27 July), on the plain east of Bouvines and the river Marque.[4] Otto was surprised by the speed of his enemy and was thought to have been caught unprepared by the King of France[5] (who probably attracted the emperor into this trap[6]). Although he was under a Church interdict,[7] Otto, already an excommunicate,[8] decided to launch an attack on what was then the French rearguard. Philippe Auguste gave battle. His army quickly retreated.

The Allied army drew up facing south-westward towards Bouvines, the heavy cavalry on the wings, the infantry in one great mass in the center, supported by the cavalry corps under the emperor himself.[4] The total force was estimated at 25,000 men; a much larger force of foot soldiers and slightly fewer cavalry than the French.[2] The French army of 15,000 men[2] took ground exactly opposite in a similar formation, cavalry on the wings, infantry, including the town militias in the centre, Philip with the cavalry reserve and the royal standard, the Oriflamme, in rear of the men on foot.[4] Philip's army contained about 2,000 knights (750 were from the royal demesne) and 2,000 mounted sergeants with the rest being infantry.[9]

Even today, the evaluation of forces is controversial. The classic French historiography often refers to Coalition troops three times more numerous than those of the King of France. Philippe Contamine[10] is not of this opinion: "On the face of it, his opponents did not have a clear numerical superiority". It is said by William the Breton, chaplain to Philip at the Battle of Bouvines, that the lines of soldiers stood in line in a space of 40 000 steps (15 hectares),[11] which leaves very little clearance and predisposes to hand-to-hand fighting (melee). William the Breton also says in his column that the two lines of combatants were separated by a pretty small space.

Philip Augustus had then launched an appeal to the municipalities in northern France, in order to obtain their support.

Seventeen of the thirty-nine municipalities of the royal demesne answered the call for militia:

The royal army was divided into three parts:

The bridge of Bouvines, the only means of retreat across the marshes, was guarded by 150 sergeants at arms of the king who formed the only reserve for the French.

At the extreme right, the English archers supported the flank of both the Brabant infantry and the nobles of the two Lorraines.[14]

The battle opened with a confused cavalry fight on the French right, in which individual feats of knightly gallantry were more noticeable (and better recorded in the chronicles) than any attempt at combined action. The serious fighting was between the two centers. The infantry of the Low Countries, who were at this time among the best in Europe, drove back the French. Philip led the cavalry reserve of nobles and knights to retrieve the day, and after a long and doubtful fight (in which he himself was unhorsed and narrowly escaped death), began to drive back the Flemings.[4]

Meanwhile on the French left Robert de Dreux's troops are at first pressed by men led by William Longespée and Renaud de Dammartin are forced to defend the Bouvines bridge foot by foot. William Longespée was unhorsed and taken prisoner by Philip of Dreux, (a.k.a. the fighting Bishop of Beauvais) and the English soldiers fled. Mathieu de Montmorency captured twelve enemy banners (in memory of this feat, the shield of Montmorency includes an additional twelve eagles or sixteen altogether instead of four previously[15]).

On the other wing the French at last routed the Flemish cavalry and captured Ferdinand, Count of Flanders, one of the leaders of the coalition. In the centre the battle was now a melee between the two mounted reserves led by the King and the Emperor in person. Here too the Imperial forces suffered defeat, Otto himself being saved only by the devotion of a handful of Saxon knights.[4] The Imperial Eagle Standard was captured by the French.

The day was already decided in favour of the French when their wings began to close inwards to cut off the retreat of the imperial centre. The battle closed with the celebrated stand of Reginald of Boulogne (Renaud de Dammartin), a former vassal of King Philip, who formed a ring of seven hundred Brabant pikemen, and not only defied every attack of the French cavalry, but himself made repeated charges or sorties with his small force of knights. Eventually, and long after the Imperial army had begun its retreat, the gallant schiltrom formation was ridden down and annihilated by a charge of three thousand men-at-arms. Reginald was taken prisoner in the melee. The prisoners also included two other counts, Hainaut Ferrand and William Longespée, twenty-five barons and over a hundred knights. The death toll amounted to about 170 knights of the defeated party, and many thousands of foot soldiers on either side.[4]

According to Jean Favier, Bouvines is "one of the most decisive and symbolic battles in the history of France".[16] For Philippe Contamine, "the battle of Bouvines had both important consequences and a great impact".[17]

Philip returned to Paris triumphant, marching his captive prisoners behind him in a long procession, as his grateful subjects came out to greet the victorious king. In the aftermath of the battle, Otto retreated to his castle of Harzburg and was soon overthrown as Holy Roman Emperor, and replaced by Frederick II. Count Ferdinand remained imprisoned following his defeat, while King John obtained a five-year truce, on very lenient terms given the circumstances.

Philip's decisive victory was crucial in ordering politics in both England and France. In the former, so weakened was the defeated King John of England that he soon needed to submit to his barons demands and agree to the Magna Carta, limiting the power of the crown and establishing the basis for common law.[18] In the latter, the battle was instrumental in forming the strong central monarchy that would characterize France until the first French Revolution. It was also the first battle in the Middle Ages in which the full value of infantry was realized.[19]

Philip conquered most of Plantagenet's continental possessions, namely Anjou, Brittany, Maine, Normandy, and the Touraine, leading to the effective end of the Angevin Empire.

In thanksgiving for the victory, Philip Augustus founded the Abbey of Notre Dame de la Victoire, between Senlis and Mont l'Evêque.[20] 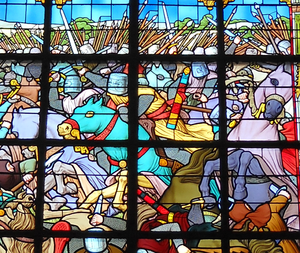 In 1914, to mark the seventh centenary, Félix Dehau had the parish church of Bouvines rebuilt with a number of stained-glass windows representing the history of the battle.[citation needed]