The Battle of Breadfield (Hungarian: Kenyérmezei csata, Romanian: Bătălia de la Câmpul Pâinii, Turkish: Ekmek Otlak Savaşı) was the most tremendous conflict fought in Transylvania up to that time in the Hungarian-Turkish Wars taking place on October 13, 1479, on the Breadfield Zsibód (Şibot) near the Mureş River. The Hungarian army was led by Pál Kinizsi, István Báthory, Vuk Branković, and Basarab Laiotă cel Bătrân.

The result of the battle was an important victory for the Kingdom of Hungary.

Turkish marauders attacked Transylvania and Vojvodina several times between 1474 and 1475. The attacks led to the depopulation of some areas with a number of villages abandoned by their inhabitants.

After the Ottoman–Venetian War (1463–79) in the spring of 1479, a major Turkish army convened under Szendrő, above all Akıncıs. When King Matthias was alerted, he ordered Stephen V Báthory, the Voivode of Transylvania and his general Pál Kinizsi to mobilize.

The Turkish army entered Transylvania on October 9, near Kelnek (Câlnic), led by Ali Kodsha bey.[1] The Akıncıs attacked a few villages, homesteads and market towns, taking a number of Hungarians, Vlachs and Saxons captive. On October 13, Kodsha bey set up his camp in the Breadfield (Kenyérmező), near Zsibót. Kodsha bey was obliged into the campaign by the insistence of Basarab cel Tânăr, a Wallachian prince, who himself brought 1,000–2,000 footmen to the cause.

The Turks continued pillaging and taking prisoners, while Báthory and Kinizsi made preparations to set forth against the Turks.

The Hungarian and the Ottoman army

The numerical strength of the Turkish army is under debate; one estimate judged them to be a 60,000, while Hungarian sources placed them closer to 30,000. Jan Długosz, the famous Polish chronicler, estimated the Ottoman forces to have been 100 thousand men-at-arms, but Matthias Corvinus estimated there were 43-45,000 Ottoman and Wallachian soldiers in his letters. A more probable number for Ottoman forces was between 6-20 thousand soldiers, and 1,000-2,000 Wallachians. The Ottoman army was almost entirely made up of Akıncıs, rumelian Spakhs and Azaps, with some Janissaries and possibly some cannon. The Turkish enterprise was not full-fledged war effort, but rather a very substantial raiding one - the largest expedition Transylvania encountered during a century's worth of Hungarian-Turkish conflicts.

Kinizsi's army consisted of Hungarian, Szekler, Serbian, Transylvanian Saxon forces, and some Vlach volunteers. The latter were commanded by Basarab cel Bătrân, quondam ruler of Wallachia and archrival to cel Tânăr. Accordingly, cel Tânăr insisted on equality with cel Bătrân, with only one being tenable to the Wallachian throne. The combined Christian forces totaled approximated 12,000 to 15,000 men. In the judgement of some, Poles, Moldavians, Russians, Lithuanians, Germans and Bohemians were privy in part to the battle, but rather difficult to substantiate.

Both armies were composed of three columns. The right flank of the Hungarian army was led by Kinizsi, the left was the Serbian light cavalry under Vuk Branković and Demetrius Jaksics with the Saxons and Báthory's forces in the center. On the Ottoman side, Kodsha bey took the left flank, Isa bey the center and Malkoch Oglu the right flank. 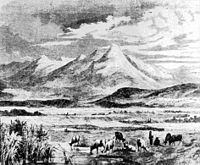 The battle commenced in the afternoon, Báthory fell from his horse and the Ottomans nearly captured him, but a valiant Antal Nagy whisked the voivode away. Having joined battle, the Ottomans were in ascendancy early on, but Kinizsi charged against the Turks with the Hungarian heavy cavalry and 900 Serbs under a Jakšić assisted by "numerous courtiers of the king". Ali bey was forced to retreat. Kinizsi moved laterally to vigorously smash the Turkish center and before long Isa bey also withdrew. The few Turks who survived the massacre fled into the mountains, where the majority were killed by the local population.[citation needed] The hero of the battle was Pál Kinizsi, the legendary Hungarian general and a man of Herculean bodily strength in the service of Matthias Corvinus' Black Army of Hungary.

Turkish casualties were extremely high with several thousand men killed, among them Malkoçoğlu and Isa bey along with together with two beys and a thousand of their Wallachian allies.[citation needed] Hungarian forces lost approximately 3,000 men in the battle.[citation needed] A few prisoners were liberated and their ransom was immense.[citation needed]

In 1480 Kinizsi raided Serbia and several times defeated Ali Kodsha bey. The Breadfield battle was a great psychological victory for the Hungarians, and as a result the Ottoman Turks did not attack southern Hungary and Transylvania for many years thereafter.