The Battle of Buçaco (pronounced: [buˈsaku]) or Bussaco, fought on 27 September 1810 during the Peninsular War in the Portuguese mountain range of Serra do Buçaco, resulted in the defeat of French forces by Lord Wellington's Anglo-Portuguese Army.[2][3]

Having occupied the heights of Bussaco (a 10-mile (16 km) long ridge located at 40°20'40"N, 8°20'15"W) with 25,000 British and the same number of Portuguese, Wellington was attacked five times successively by 65,000 French under Marshal André Masséna. Masséna was uncertain as to the disposition and strength of the opposing forces because Wellington deployed them on the reverse slope of the ridge, where they could neither be easily seen nor easily softened up with artillery. The actual assaults were delivered by the corps of Marshal Michel Ney and General of Division (Major General) Jean Reynier, but after much fierce fighting they failed to dislodge the allied forces and were driven off after having lost 4,500 men against 1,250 Anglo-Portuguese casualties.

In 1810, Emperor Napoleon I ordered Masséna to drive the British from Portugal. Accordingly, the French marshal began the Siege of Ciudad Rodrigo in April. The Spanish garrison held out until 9 July when the fortress fell. The Battle of the Côa was fought soon after. The Siege of Almeida ended suddenly with a massive explosion of the fortress magazine on 26 August. With all obstacles cleared from their path, the French could march on Lisbon in strength.

It was important to delay the French until the defences being built around Lisbon, the Lines of Torres Vedras could be completed. Using selective demolition of bridges and roads, Viscount Wellington restricted the choice of routes the French could use and slowed the advance of the French troops. At the end of September, they met Wellington's army drawn up on the ridge of Bussaco.

The ridge, which at its highest rises to 549 metres in height, lies at right angles to the main road to Coimbra and thence to Lisbon, providing one of the few and certainly the best defensive position on the French route of march. 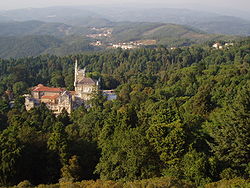 Mountains and National Palace of Bussaco 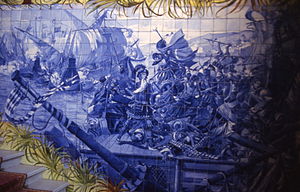 Wellington posted his army along the crest of Bussaco Ridge, facing east. To improve his lateral communications, he had previously ordered his four officers from the Royal Corps of Engineers[7]:262 to cut a road that ran the length of the ridge on the reverse slope. Cole held the left (north) flank. Next came Craufurd, Spencer, Picton and Leith. Hill held the right (south) flank with Hamilton's men attached.[8]

Masséna, believing he easily outnumbered the British and goaded by Ney and other officers to attack the British position rather than go around it, ordered a reconnaissance of the steep ridge. Very few of Wellington's troops were visible, as they remained on the reverse slope and were ordered not to light cooking fires. The French General planned to send Reynier at the centre of the ridge, which he believed to be the British right flank. Once the II Corps attack showed some signs of success, Masséna would launch Ney's corps at the British along the main road. The VIII Corps stood behind the VI Corps in reserve. While Ney announced that he was ready to attack and conquer, Reynier suddenly had second thoughts, predicting his attack would be beaten.[9] 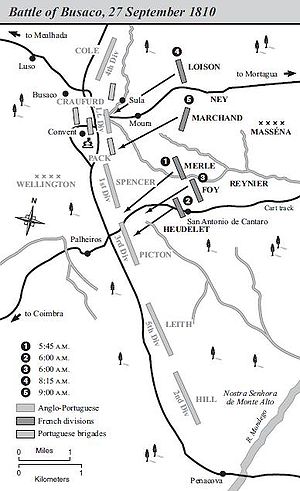 Map of the battle

Reynier's troops struck in the early morning mist. Heudelet sent his leading brigade straight up the slope in a formation one company wide and eight battalions deep. When the leading regiment reached the top of the ridge, they found themselves facing the 74th Foot and two Portuguese battalions in line, plus 12 cannon. The French tried to change formation from column into a line. Pelet says, "The column began to deploy as if at an exercise."[10] But the Allies brought intense musketry to bear. Soon, the French infantrymen were thrown into confusion. However, they clung to a precarious toehold on the ridge.

Several hundred yards to the north, Merle's division thrust up the ridge in a similar formation. Picton hurriedly massed his defenders by utilizing the ridgetop road. Met at the crest by the 88th Foot and the 45th Foot and two Portuguese battalions in a concave line, the French tried unsuccessfully to deploy into line. Crushed by converging fire, the French fled down the slope.[11] Merle was wounded while General of Brigade Jean François Graindorge fell mortally wounded.[12] Wellington rode up to Colonel Alexander Wallace of the 88th and remarked, "Wallace, I have never witnessed a more gallant charge."[13]

Seeing Heudelet's second brigade standing immobile at the foot of the ridge, Reynier rode up to BG Maximilien Foy and demanded an immediate attack. With the Allies out of position after defeating the first two attacks, Foy hit a weak spot in their defences. Fortuitously, the French struck the least prepared unit in the Allied army—a Portuguese militia unit—and routed it. But the morning mist cleared, revealing no enemies in front of the British right flank. Wellington had already ordered Leith to shift his men to the north to assist Picton. Before Foy's men could consolidate their gain, they were attacked by the 9th Foot and 38th Foot of Leith and some of Picton's men.[14] The French were swept off the ridge and Foy wounded.[12] After seeing this rout, Heudelet's other brigade withdrew to the base of the ridge.

Hearing gunfire, Ney assumed Reynier's men were enjoying success and ordered an attack. In this sector, the main highway climbed a long spur past the hamlets of Moura and Sula to reach the crest at the Convent of Bussaco. Against a very heavy British skirmish line, Loison's division fought its way forward. Near the crest, 1,800 men of the 43rd and 52nd infantry regiments lay down waiting. As Loison's leading brigade approached the convent grounds, the two British units stood up, fired a terrific volley at point blank range and charged with the bayonet.[13] The French brigade collapsed and fled leaving BG Édouard Simon, their commander, wounded and a prisoner.[10]

A short time later and slightly further south, Loison's second brigade under BG Claude François Ferey ran into a close-range fire from two batteries plus Anglo-Portuguese musketry. This unit was also routed. A final thrust by BG Antoine Louis Popon de Maucune's brigade of Marchand's division met defeat when it ran into Denis Pack's Portuguese brigade. The two sides occupied the rest of the day in vigorous skirmishing, but the French did not try to attack in force again.[14]

Masséna now realised the size of Wellingtons forces and the strength of the defensive position, so that afternoon ordered troops to move off to the right on a hazardous but skilful move to outflank the position and reach another road to the north just ahead of a Portuguese Corps that had been sent there to defend it. [7]:262

Wellington, after spending the night in the convent, and finding his position turned, resumed the leisurely retreat of his army towards the, still being constructed, Lines of Torres Vedras.[7]:263 He reached these in good order by 10 October.

Continuing to advance, Masséna had left his sick and wounded troops at Coimbra, where a few days later, they fell into the hands of the Portuguese.[7]:263

This was the first major battle of the Peninsular War in which units of the reconstituted Portuguese Army fought, where the Portuguese troops played a prominent part and the victory served as a great morale boost to the inexperienced troops.

After probing the Lines in the Battle of Sobral on 14 October, Masséna found them too strong to attack and withdrew into winter quarters. Deprived of food for his men and harried by Anglo-Portuguese hit-and-run tactics, he lost a further 25,000 men captured or dead from starvation or sickness before he retreated into Spain early in 1811. This finally freed Portugal from French occupation except for the fortress of Almeida, near the frontier. During the retreat, several actions were fought, including the Battle of Sabugal.

Sharpe's Escape by Bernard Cornwell covers the Battle of Bussaco.