Tensions between Spain and Britain were high. On 2 August 1718 the Quadruple Alliance consisting of the Holy Roman Empire, Kingdom of France, Kingdom of Great Britain and the Republic of the Seven United Netherlands, demanded that the Spanish withdraw their invading forces from Sicily and Sardinia. The British fleet had landed a small Austrian army near Messina, which began besieging that city which was controlled by the Spanish. 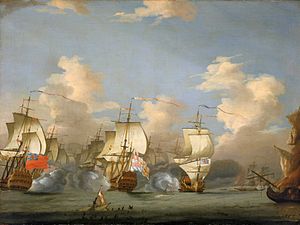 The men-of-war of the Spanish fleet were made up of eleven ships of the line of 50 guns or above, ten frigates[contradictory], four bomb vessels, two fireships and seven galleys; the rest were merchantmen with stores and provisions.

The fleet was sailing in a scattered way and it sensed no danger when it caught sight of the British ships because it was unaware of the Quadruple Alliance's ultimatum. When the British fleet began to approach in an aggressive way, the Spanish fleet split into two – the smaller ships and merchantmen made for the coast, while the larger men-of-war engaged the British as they came up. HMS Canterbury, under George Walton was detached along with HMS Argyll, HMS Burford and four other ships to chase the first group and captured most of them. These captured Spanish warships were afterwards laid up in Minorca.

A shipwreck has been found (2012) just off Avola, near the south-eastern tip of Sicily. Cannon have been raised from the wreck identifying it as a British ship, probably one sunk in this battle. The location of the wreck helps to pinpoint the site of the battle.[2]

Four months later on 17 December 1718, France, Britain and Austria declared war on Spain, starting the War of the Quadruple Alliance. The Netherlands joined them later, declaring war on Spain in August 1719.

Thwarted by Spanish interference, the besieging Austrian army captured Messina the next year, and destroyed the remaining Spanish ships in the harbour. These events combined to eventually force the Spanish king to accept the terms of the Quadruple Alliance in 1720.

Byng was rewarded handsomely for this victory by King George I of Great Britain, and given full power to negotiate with the various princes and states of Italy, on behalf of the British crown. On his return to England in 1721, he was made Rear-Admiral of Great Britain, a member of the Privy Council, and ennobled as Baron Byng of Southill and 1st Viscount Torrington, in Devon.

Of the ships captured in this battle, the Principe de Asturias had formerly been the British 80-gun ship Cumberland, captured by the French in 1707 and later sold to Spain; after the Battle of Cape Passaro, she was sold to Austria. In 1731 the British offered to return the other captured ships laid up in Minorca, but they were found to be rotten and were broken up instead.