From Infogalactic: the planetary knowledge core
Jump to: navigation, search
For other battles, see Battle of Cassel (disambiguation). 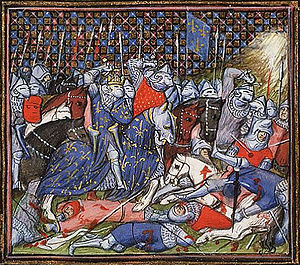 On 23 August 1328, the Battle of Cassel took place near the city of Cassel, 30 km south of Dunkirk in present-day France. Philip VI, (King of France from 1328 to 1350) fought Nicolaas Zannekin, a wealthy farmer from Lampernisse. Zannekin was the leader of a band of Flemish independence rebels. The fighting erupted over taxation and punitive edicts of the French over the Flemish. The battle was won decisively by the French. Zannekin and about 3200 Flemish rebels were killed in the battle.

The Count of Flanders, Louis I, was collecting taxes for Charles IV of France. Residents of the bailiwicks of Veurne, St. Winoksbergen, Belle, Kassel, Poperinge and Bourbourg united and refused to pay. The Count threatened reprisals and the people rioted, under the leadership of Nicolaas Zannekin. In 1325, Zannekin captured Nieuwpoort, Veurne and Ypres. He also captured Kortrijk and the Count of Flanders himself. Later attempts to capture Ghent and Oudenaarde failed. In February 1326, Charles IV intervened and Louis I was released and the "Peace of Arques" was agreed.

Role of the Church

On 6 April 1327, at the request of Charles IV, Pope John XXII of Avignon renewed an interdict which denied those in Flanders, other than the aristocracy and the clergy the sacraments of the church and a sacred burial. The Pope was seen as a puppet of the King. The Flemish clergy disagreed about whether or not to apply the rule. Some clergymen (who feared they would be killed by opponents of French rule) laid the papal regulation aside. Jean Laing, Dean of St. Winoksbergen, asked the clergy of his diocese to apply the regulation. Jacob Peyt, a leader of the Flemish rebels in Hondschote, tried to capture Laing and pressure the clergy to ignore the edict. The rebels' actions had some success.

Influence of the French and English royalty

Louis I feared the Flemish and Edward III would form a coalition against him. He asked Charles IV of France to intervene. Louis I departed from Ghent, (the last French stronghold in Flanders) to Paris to plead his case. On 24 January 1328 Edward III married Philippa of Hainault (1314 - 1369). Phillipa was the daughter of William I, Count of Hainaut of Avesnes and Holland, who was an ally of Charles IV.

On 1 February 1328, Charles IV died unexpectedly. Edward III claimed the throne of France but the aristocracy favoured Philip, the son of Charles of Valois who ascended the throne as Phillip VI. The Pope urged Phillip to 'sort out' the Flemish rebels. The King re-established the rights of the Flemish aristocracy but violence erupted and some were overrun and slain by the Flemish rebels. Louis I, Count of Nevers, fled to seek help from Phillip VI.

William Dean, Mayor of Bruges, an ally of the Flemish rebels, hoped the marriage of Phillipa and Edward III would assuage the English King in his dealings with Flanders. In June 1328, Dean travelled to England seeking support for the Flemish movement. Even though Edward III was troubled with a Scottish rebellion at the time and still held a desire to claim the French throne he was reconciled with Phillip VI and did not lend his support.

Situation in the Flemish lands

Louis I gained the upper hand against the Flemish rebels when the Bishop of Paris signed a document to the effect that anyone causing unrest would be beaten and their property confiscated with half the proceeds going to the Treasury of France. Nevertheless, the unrest continued. For example, in 1322, Louis I had forbidden cloth production outside Leper-Ypres. The town of Poperinge ignored the monopoly and the Leper Militia formed. Again, on 8 August 1328, in Bruges, rebels were led in uprising by Jan Breydel.

The English Queen's father, Count William I of Hainaut-Holland was one of the commanding officers in the French army; he commanded the Hainault, Holland, Zeeland and Friesland knights. Philip VI sent archers from Provence, Languedoc and Genoa and soldiers from Bohemia. Other rulers, the King of Navarre; the Crown Prince of Austria; the Dukes of Burgundy, Brittany, Lorraine and Bourbon, the Counts of Alençon, Bar and Savoy all sent military support. Altogether, the army which amassed in Arras included 2500 heavily armed knights on horseback and 12000 light infantrymen and archers. However, Louis I was not present; he was most likely raising troops in and around Oudenaarde and Ghent.

Phillip VI was confident of winning the battle and paying the costs of his army with the plunder. He positioned a force along the Lys river. The Flemish rebels were forced to guard Lille and Tournai. The military forces in Bruges were strengthened to control the Flemish rebels around Ghent. The French army arrived at the Augustinian abbey at Warneton. They aimed to divide the Flemish troops by advancing along the river Leie, forcing the Flemings to cover the approaches from Lille and Tournai. Zannekin, with 15000 soldiers, encamped on the higher ground at Cassel approximately 4 km from the French. Nothing happened for about three days. The French tried to exhaust the Flemish rebels and lure them away from their position.

On 23 August, the French soldiers set fire to several villages near Cassel to distract the Flemish but the manoeuvre failed. Zannekin attacked in three divisions. He commanded the division which attacked the French centre. He surprised the French infantrymen and in panic, they fled towards Saint-Omer. The Duke of Lorraine was killed but Dukes of Burgundy and Brittany and the Counts of Bar, Boulogne and Savoy were badly wounded but did not die. The French knights, because it was a very hot day, had removed their armour to rest but under Robert of Cassel they regrouped and attacked the first Flemish division from the rear. The second division was assigned to attack on the left wing to take the Henegouwers, the Dutch and the Frisians. They had little success and were captured or killed. The third division remained in reserve.