From Infogalactic: the planetary knowledge core
Jump to: navigation, search
Not to be confused with Battle of Cecora (1595).

The Battle of Cecora (also known as the Battle of Ţuţora/Tsetsora Fields) was a battle between the Polish-Lithuanian Commonwealth (aided by rebel Moldavian troops) and Ottoman forces (backed by Nogais),[3]:344 fought from 17 September to 7 October 1620 in Moldavia, near the Prut River.[4]:568

Because of the failure of Commonwealth diplomatic mission to Constantinople, and violations of the Treaty of Busza by both sides (as Cossacks and Tatars continued their raids across the borders), relations between the Ottomans and the Commonwealth rapidly deteriorated in early 1620. Both sides began preparing for war, as neither was quite ready for it at the time. The Ottomans declared war against Poland in 1620 and planned to attack in the spring of 1621.[3]:341 The Commonwealth Sejm denied most funds the hetmans had asked for. The Senate's secret council finally decided, convinced by the Habsburgs' representative, to contribute the Commonwealth forces in 1620—even though many members of the Sejm thought that Polish-Lithuanian forces were neither sufficient nor fully prepared. Hetman Stanisław Żółkiewski, who was by then over 70 years old (as Commonwealth policy didn't allow for a possibility of forced retirement from government offices such as that of hetman), foresaw the coming confrontation with the Ottoman Empire and decided to meet Ottoman troops on foreign soil, Moldavia being the obvious choice.[5] However, the sultan sent Iskender Pasha to Moldavia to remove Hospodar Gaspar Gratiani, who had allied himself with Poland.[3]:341

Hetmans Zółkiewski and Koniecpolski led the army to Țuțora (Cecora in Polish sources), a commune in Iaşi county, Romania), to fight the Horde of Khan Temir (Kantymir). The army numbered between 5,000[3]:342 to 9,000 (2,000 infantry but only about 1600 Cossack cavalry[3]:344), with many regiments being made up of the private forces of magnates Koreckis, Zasławskis, Kazanowskis, Kalinowskis and Potockis. The army entered Moldavia in September. The Moldavian ruler, hospodar Gaspar Graziani, nominally a vassal of the Ottoman Empire, decided to rebel and support the Commonwealth against the Ottomans. Graziani killed the janissaries in Iaşi, imprisoned envoys of Sultan Osman II (who had ordered his removal from power and his transport to Istanbul) and then prepared to flee, but was forced by Żółkiewski to attach his troops to the Polish-Lithuanian camp.[3]:344 However, many of the Moldavian boyars left the camp in order to defend their own estates against pillaging by undisciplined Commonwealth magnates' troops, others decided to wait and see what the outcome appeared to be so they could join the winning side, and others joined the Turks.[3]:344 Consequently, only about 600–1000 rebel Moldavian troops appeared in the Commonwealth camp. Żółkiewski ordered the army to proceed to the fortified camp (standing from previous wars) at Cecora. 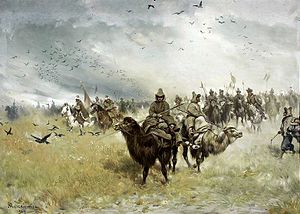 Tatar warriors of the Crimean Khanate during the Battle of Cecora (1620).

On 10 September, near Ţuţora (close to Iasi, Romania), the Commonwealth army encountered the Tatar and Ottoman forces, with Wallachian contingents (13,000–22,000) under the command of Iskender Pasha, the beylerbey of Ochakiv (Ozi). The Ottoman Sultan's force included Gabriel Bethlen's army.[3]:342 The Tatar forces surprised the Commonwealth defenders, taking many prisoners. During the first day of fighting (the 18th), most of the rebel Moldavians decided to switch sides and quickly attacked the Polish-Lithuanian flank. Mercenaries, private troops and their magnate leaders were lacking in discipline and morale. Stanisław Koniecpolski commanded the right flank of the Commonwealth forces during the ensuing battle. On 19 September it had become clear that the Polish-Lithuanian forces were defeated, although they still managed to hold their positions; Koniecpolski prevented the army from disintegrating on 20/21 September. On 29 September Commonwealth troops had broken through Ottoman ranks with tabor wagon trains and started their retreat. However, after Graziani bribed some magnates, units of private troops begun to flee and some mercenary cavalry panicked and also ran. This was a prelude of things to come. Consecutive attacks during the retreat (including a particularly violent one on 3 October) were repelled, but troop units started disintegrating as soon as soldiers caught sight of the Dniester and the Polish-Lithuanian border.

During another heavy assault on 6 October, most of the magnates and nobles broke and fled north,[3]:344 leaving infantry and camp, thus sealing the fate of the whole expedition: most of the Polish-Lithuanian troops were killed or captured. In the ensuing battle Żólkiewski died[6] and Koniecpolski[3]:344 and many others (Samuel Korecki, Mikolaj Struś, Mikołaj Potocki, Jan Żółkiewski, Łukasz Żołkiewski), Stanisław "Rewera" Potocki and Bohdan Khmelnytsky were taken captive. Before his death he received the blessing of his confessor, Father Szymon Wybierski (Wybierek, Wyberek) of the Society of Jesus, who stood by his side (7 October).[7] Żółkiewski's head was mounted on a pike and sent to the sultan; Duke Korecki, having often meddled in Moldavian territories, was executed in the Constantinople prison.[citation needed]

In the face of such an important victory, advised by grand vizier Ali Pasha and Gabriel Bethlen, Osman II decided that he could reinforce his rule or even extend it. Alexandru Iliaş was appointed as the ruler of Moldavia, the rebel Graziani having been killed during his flight on 29 September.

Only a thousand Commonwealth men survived the battles, while the Tatars moved into Podilia, Volhynia and Galicia.[3]:344

In 1621 an army of 200,000–250,000 Ottoman veterans, led by Osman II, advanced from Edirne towards the Polish frontier. The Ottomans, following their victory in the Battle of Cecora, had high hopes of conquering Ukraine, at the time a part of Poland. Polish commander Jan Karol Chodkiewicz crossed the Dniester in September with approximately 35,000 Polish troops and Cossack supporters and entrenched himself at the Khotyn Fortress, blocking the path of the slow Ottoman march. At Khotyn, for more than a month (2 September – 9 October), the Commonwealth hetman held the sultan at bay until the first autumn snow (Battle of Khotyn). The lateness of the season and the loss of approximately 40,000 men in battle compelled Osman II to initiate negotiations. A few days before the siege was to be lifted, the aged grand hetman died of exhaustion in the fortress (24 September 1621). The battle was a stalemate and the resulting Treaty of Khotyn reflected it, providing some concessions to the Commonwealth but meeting some Ottoman demands.

Osman II blamed the stalemate of war on the lack of zeal and the "degeneracy" of the Janissaries. His efforts at modernizing the Ottoman army were not well received by the Janissaries and the conservative "learned" class. A revolt led by Janissaries and the students of the madrases erupted on 18 May 1622 and Osman II was deposed; two days later he was killed by the rebels who deposed him.

The Battle of Cecora is commemorated on the Tomb of the Unknown Soldier, Warsaw, with the inscription "CECORA 18 - 29 IX 1620".