The Battle of Chaldiran or Chaldoran (Persian: چالدران‎‎; Turkish: Çaldıran) occurred on 23 August 1514 and ended with a decisive victory for the Ottoman Empire over the Safavid Empire. As a result, the Ottomans annexed eastern Anatolia and northern Iraq for the first time from Safavid Iran.[12] Despite brief Iranian reconquerings over the course of the centuries by the Safavids as well as by successive Iranian states, the Ottomans would manage by the next bout of hostilities, the 1532-1555 war to fully conquer most the same territories annexed in the Chaldiran battle. By the Chaldiran war, the Ottomans as well gained temporary control of northwestern Iran. The battle, however, was just the beginning of 41 years of destructive war and merely one of the many phases of the Ottoman-Persian Wars, which only ended in 1555 with the Treaty of Amasya. The Ottomans generally had the upper hand, but the Persians for the most part held their ground.[vague] Safavid losses in Shia-dominated metropolitan regions of Persia, such as Luristan and Kermanshah, proved temporary, being quickly recovered from the Ottomans, but important Persian cities such as Tabriz were often the target of destructive Ottoman raids. An exception was Mesopotamia and Eastern Anatolia (Western Armenia) which although eventually taken back, they would be permanently lost to the Ottomans by the 1639 Treaty of Zuhab.

At Chaldiran, the Ottomans had a larger, better equipped army numbering 60,000 to 200,000, while the Qizilbash Turcomans numbered some 40,000 to 80,000. Shah Ismail I, who was wounded and almost captured in the battle, retired to his palace and withdrew from government administration[13] after his wives were captured by Selim I,[14] with at least one married off to one of Selim's statesmen.[15] The battle is one of major historical importance because it not only negated the idea that the Murshid of the Shia-Qizilbash was infallible,[16] but it also fully defined the Ottoman-Safavid borders for a short time with the Ottomans gaining northwestern Iran, and led Kurdish chiefs to assert their authority and switch their allegiance from the Safavids to the Ottomans.[17]

After Selim I's successful struggle against his brothers for the throne of the Ottoman Empire, he was free to turn his attention to the internal unrest he believed was stirred up by the Shia Qizilbash, who had sided with other members of the Dynasty against him and had been semi-officially supported by Bayezid II. Selim now feared that they would incite the population against his rule in favor of Shah Isma'il leader of the Shia Safavids, and by some of his supporters believed to be family of the Prophet. Selim secured a jurist opinion that described Isma'il and the Qizilbash as "unbelievers and heretics" enabling him to undertake extreme measures on his way eastward to pacify the country.[18] In response, Shah Isma'il accused Sultan Selim of aggression against fellow Muslims, violating religious sexual rules and shedding innocent blood.[19]

When Selim started his march east, the Safavids were invaded in the east by the Uzbek state recently brought to prominence by Abu 'I-Fath Muhammad, who had fallen in battle against Isma'il only a few years before. To avoid the prospect of fighting a war on two fronts, Isma'il employed a scorched earth policy against Selim in the west.[20]

The terrain of eastern Anatolia and the Caucuses is extremely rough and combined with the difficulty in supplying the army in light of Isma'il's scorched earth campaign while marching against Muslims, Selim's army was discontented. The Janissaries even fired their muskets at the Sultan's tent in protest at one point. When Selim learned of the Safavid army forming at Chaldiran, he quickly moved to engage Isma'il in part to stifle the discontent of his army.[21] 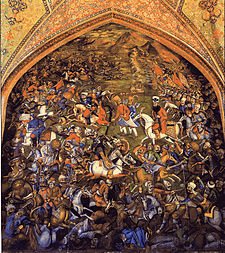 Artwork of the Battle of Chaldiran. 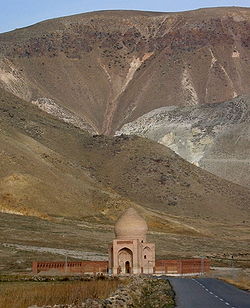 Following their victory the Ottomans captured the Safavid capital city of Tabriz, which they first pillaged and then evacuated. The Ottoman Empire successfully annexed the eastern part of Anatolia (encompassing Western Armenia) and also northern Iraq from the Safavids despite several brief as well as long lasting regains during subsequent wars and battles against the neighbouring rivalling Safavids, as well as other successive Iranian states. However, Ottoman hold over Eastern Anatolia and swaths of Mesopotamia (Iraq) wouldn't be set until the 1555 Peace of Amasya following the Ottoman-Safavid War (1532-1555), and effective governmental rule and eyalets would not be established over these regions until the out coming result of the 1639 Treaty of Zuhab. By the Chaldiran battle, the Ottomans also gained brief control over northwestern Iran. The Shia defeat at Chaldiran brought an end to the Shia uprisings in Ottoman Empire. After two of his wives were captured by Selim[24] Ismail was heartbroken and resorted to drinking alcohol.[25] Ismail did not participate in government affairs,[26] as his aura of invincibility was shattered.[27]

After the defeat at Chaldiran, however, the Safavids made drastic domestic changes. From then on, firearms were made an integral part of the Persian armies and Ismail's son, Tahmasp I deployed cannons in subsequent battles.[28][29]

After the victorious battle of Chaldiran, Selim I would then throw his forces southward to fight the Mamluk Sultanate in the Ottoman–Mamluk War (1516–1517).

The site of the battle is near Chala Ashaqi village, around 6 km west of the town of Siyah Cheshmeh, south of Maku, north of Qareh Ziyaeddin. A large brick dome was built at the battlefield site in 2003 along with a statue of Seyid Sadraddin, one of the main Safavid commanders.

After the battle, Selim referring to Ismail believed that his adversary was:

Always drunk to the point of losing his mind and totally neglectful of the affairs of the state.[30]