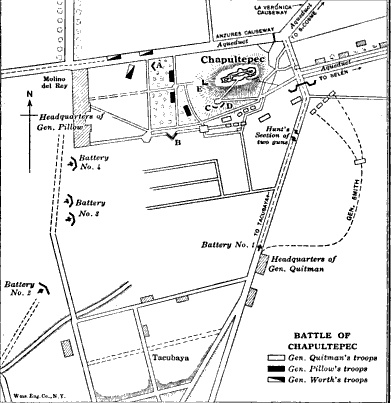 The Battle of Chapultepec in September 1847 was a United States victory over Mexican forces holding Chapultepec Castle in Mexico City during the Mexican-American War. The castle, sitting atop a 200-foot (60 m) tall hill, was an important position for the defense of the city. Its capture paved the way for the fall of Mexico City.

On September 8, 1847, in the costly Battle of Molino del Rey, U.S. forces had managed to drive the Mexicans from their positions near the base of Chapultepec Castle guarding Mexico City from the west. However, Army engineers were still interested in the southern causeways to the city.[1]:311 General Winfield Scott held a council of war with his generals and engineers on September 11.[1]:311 Scott was in favor of attacking Chapultepec and only General David E. Twiggs agreed.[1]:312 Most of Scott's officers favored the attack through the southern gates, including Captain Robert E. Lee.[1]:312 A young lieutenant, P. G. T. Beauregard, gave a text book speech that persuaded General Franklin Pierce to change his vote in favor of the western attack.[1]:312

According to military records at the General National Archives in Mexico City, Chapultepec Castle was only defended by 400 men, 300 from de Batallón de San Blas under the command of Lieutenant Colonel Felipe Xicoténcatl, and the castle's garrison of 100 men, including the cadets. The additional Mexican troops were used in external walled redoubts of the castle to protect a large rectangular piece of ground in front of the castle itself. This area was protected by high walls and was about three-quarters of a mile long by one-quarter mile deep. This area was critical to the defense of the castle because the slope of the hill from the west was so gentle, it also encompassed the southern slopes which were moderate compared to the steep escarpments on the east and north. Also the source of water for the castle was located within this area.

Scott organized two storming parties.[1]:313 The first party consisted of Captain Samuel Mackenzie's 256 men and Gideon Pillow's division, who would advance from the Molino east up the hill.[1]:313 The second storming party consisted of Captain Silas Casey's men and John A. Quitman's division, advancing along the Tacubaya road.[1]:313 However, Casey was replaced by Major Levi Twiggs. Only David E. Twiggs' division and Bennett Riley's brigade were left on the American right flank.[1]:312

The Americans began an artillery barrage against Chapultepec at dawn on September 12.[1]:312 It was halted at dark and resumed at first light on September 13.[1]:316 At 8 AM, the bombardment was halted and Winfield Scott ordered the infantry attack.[1]:316 There were three assault columns. On the left were the 11th and 14th Infantry under Colonel William Trousdale moving east along the Anzures aqueduct, in the center were four companies of the Voltigeur regiment under Colonel Timothy Patrick Andrews along with the 9th and 15th Infantry moving through the swamp and western edge of the grove, and on the right were the remaining four Voltigeur companies under Lieutenant Colonel Joseph E. Johnston.[1]:316

Pillow was quickly hit in the foot and called for reinforcements, which came from John A. Quitman's division but the attack faltered when fired upon by the Moelia Battalion battery.[1]:317 Andrews's column cleared the grove of Mexican troops and linked up with Johnston.[1]:316 Yet, the attack by the 9th and 15th Infantry stalled waiting for scaling ladders, and Col. Truman B. Ransom was killed.[1]:316–317 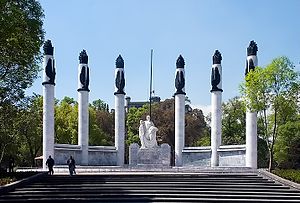 Monument to the six Heroic Cadets, with Chapultepec Castle in the background.

Quitman sent Persifor Smith's brigade to his right and brought in James Shields, plus the New York and 2d Pennsylvania Regiments into the assault.[1]:317 At the same time, Newman S. Clarke's brigade arrived on the western slope, as did the scaling ladders.[1]:317 The Voltigeurs soon planted their flag on the parapet.

By 9 AM, General Bravo surrendered to the New York Regiment and the American flag flew over the castle.[1]:318 Santa Anna watched the Americans take Chapultepec while an aide exclaimed "let the Mexican flag never be touched by a foreign enemy". He also exclaimed, "I believe if we were to plant our batteries in Hell the damned Yankees would take them from us."[1]:318

During the battle, six Mexican military cadets refused to fall back when General Bravo finally ordered retreat and fought to the death.[1]:316 These were teniente (lieutenant) Juan de la Barrera and cadets Agustín Melgar, Juan Escutia, Vicente Suárez, Francisco Márquez and Fernando Montes de Oca, all between the ages of 13 and 19. According to legend, the last of the six, Juan Escutia, grabbed the Mexican flag, wrapped it around himself and jumped off the castle point to prevent the flag from falling into enemy hands. In 1967, Gabriel Flores painted a mural depicting "Los Niños Héroes".[3] 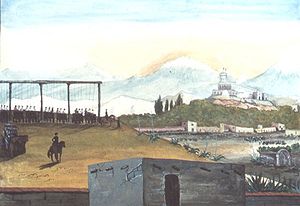 Sam Chamberlain "Hanging of the San Patricios following the Battle of Chapultepec."

A mural decorates the ceiling of the palace, showing Juan Escutia wrapped in the flag, apparently falling from above.[4] A monument stands in Chapultepec Park commemorating their courage. The cadets are eulogized in Mexican history as Los Niños Héroes, the "Child Heroes" or Heroic Cadets.

Thirty men from the Saint Patrick's Battalion, a group of former United States Army soldiers who joined the Mexican side, were executed en masse during the battle. They had been previously captured at the Battle of Churubusco. Colonel William S. Harney specified that they were to be hanged with Chapultepec in view and that the precise moment of their death was to occur when the U.S. flag replaced the Mexican tricolor atop the citadel. 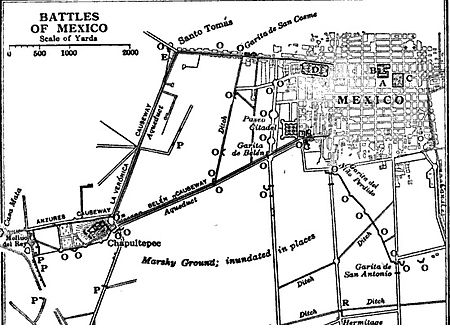 Molino del Rey is on the left. "O" depicts a Mexican battery, "P" an American battery, and "R" is Steptoe's battery.[2] 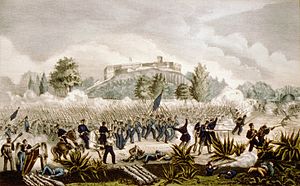 Attack on the Castle Chapultepec.

General Scott arrived at the castle and was mobbed by cheerful soldiers.[1]:318 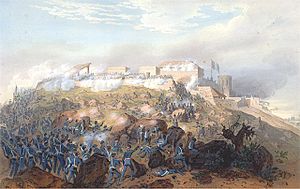 A painting of the American assault on the Chapultapec castle.

General Quitman quickly gathered the troops in Chapultepec, except the 15th Infantry who guarded the castle and prisoners, and designed as a feint, headed down the Belén Causeway stopping at the Belen Garita.[1]:318 The gate was manned by the Morelia Battalion, under the command of General Andrés Terrés' (three guns and 180 men  : 2d Mexico Activos) and the paseo to the north by General Ramirez.[1]:318 Troops began to desert, and when Terres ran out of ammunition, he withdrew into the Ciudadela.[1]:319 Led by the Mounted Rifles (fighting on foot), Quitman breached the Belén Gate at 1:20 p.m.[1]:319 General Scott later commented "Brave Rifles, you have gone through fire and come out steel".[1]:319 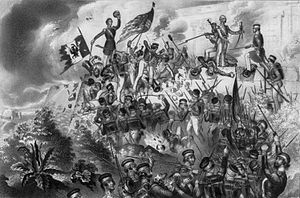 "Storming of Chapultepec in Mexico."

It was 4 p.m. by the time Worth started his advance down the San Cosme causeway, having fended an attack by Torrejon's 1,500 cavalry.[1]:320 Garland's brigade used the arches of the aqueduct to advance on the right.[1]:320 Clarke's men on the right passed through a tunnel made by sappers.[1]:320 Lieutenant Ulysses S. Grant, and some 4th Infantry, used the bell tower of San Cosme Church south of the causeway to place a mountain howitzer.[1]:320 On the north side of the road, naval officer Raphael Semmes repeated Grant's successful maneuver.[1]:320 Lieutenant George Terrett then led a group of Marines behind the Mexican defenders and, climbing to the roof, unleashed a deadly volley on the artillery gunners.[1]:320 By 6 p.m., Worth had broken through the gate, and the defenders scattered, many retreating into the Ciudadela, sweeping Santa Anna along with them.[1]:320 As night fell, Worth lobbed five mortar rounds into the city which fell near the National Palace.[1]:321 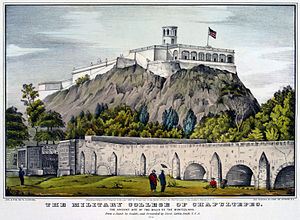 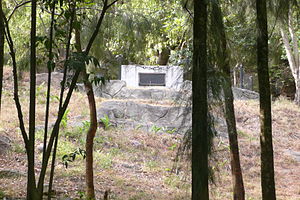 The efforts of the U.S. Marines in this battle and subsequent occupation of Mexico City are memorialized by the opening lines of the Marines' Hymn, "From the Halls of Montezuma..." .

Marine tradition maintains that the red stripe is worn on the trousers of the Blue Dress uniform, commonly known as the blood stripe, because all of the Marine NCOs and officers of the detachment died while storming the castle of Chapultepec in 1847, though iterations of the stripe predate the war. In 1849, the stripes were changed to a solid red from dark blue stripes edged in red, which dated from 1839.[5]

In 1947, President Harry S. Truman laid a wreath on the Cadets Monument as a gesture of goodwill after Mexico aided the U.S. in World War II.