The Battle of Dervenakia (Greek: Μάχη των Δερβενακίων) was the Greek victory over the Ottoman forces on 26–28 July 1822, an important event in the Greek War of Independence. The destruction of Dramali Pasha's forces saved the heartland of the rebellion, the Morea, and secured it for the Greeks until the arrival of Ibrahim Pasha in 1825.

After the final defeat and death of Ali Pasha, the Ottoman forces in northern Greece were reoriented to the south, where the Greeks had rebelled in early 1821. A force of some 30,000 men, including 6,000 cavalry, was entrusted to Mahmud Dramali Pasha (pasha of Larissa), who had replaced the veteran Hursid Pasha. This force was the largest seen in Greece in more than a century, since the last Venetian-Ottoman War, composed of experienced warriors with ample supplies. Dramali was expected to crush the Greek rebellion by advancing to Corinth, relieve the besieged garrison of Nafplion and recapture the capital of the Morea, Tripoli.

Setting out from Zitouni (Lamia) early in July, he proceeded southwards through Boeotia. He made no attempt to retake the Acropolis of Athens which, although well supplied with provisions and ammunition, had capitulated to the Greeks on 21 June owing to lack of water. The Greeks had sent a force to block the passes at Geraneia, but the size of the Ottoman army discouraged them, and Dramali passed through unmolested. The same was repeated at the fort of Acrocorinth, which was abandoned by its commander, Iakovos Theodoridis, after he murdered the imprisoned Kiamil Bey. After arriving at Corinth in mid-July, Dramali wedded Kiamil's widow, and called a council to determine his future actions. There, many of his officers, headed by Yussuf Pasha of Patras, urged him to follow a military plan of using Corinth as a base, building up strong naval forces in the gulf and isolate the Morea, before advancing on Tripoli. Dramali ignored this sound advice, and, full of confidence, decided to proceed from Corinth to the south, towards the Argolis.

Dramali passed through the narrow defile known as the Dervenaki (Tretos) and on 24 July reached Argos, whence the Greek government had fled. He left no guards behind him in the Dervenaki and he posted no forces where other defiles exposed his flanks. He sent cavalry forward to join the Ottoman garrison at Nafplion, which at that time was on the point of capitulation. As it was, Dramali was able to seize the Greek hostages which the garrison was holding there as a pledge for the safety of Muslim hostages held by the Greeks.

Trapped in the Argolis 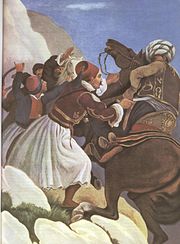 Nikitas Stamatelopoulos during the Battle of Dervenakia by Peter von Hess.

On arriving in Argos, he found that its citadel, Larissa, was manned, and that the Ottoman fleet, with which he had planned to rendezvous with the Ottoman fleet at Nafplion, was actually at Patras. What he should have done was to have fallen back immediately to Corinth, from where he could have drawn supplies from Patras. Instead, he launched an attack on the citadel. The Greeks, under Demetrios Ypsilantis, held out for twelve days, before lack of water forced them to sneak out past the Ottoman lines in the middle of the night. However, while Dramali was preoccupied with Larissa, the Greeks rallied their forces.

Already the Peloponnesian Senate had stepped into the place vacated by the central government. Military leaders like Theodoros Kolokotronis and Petrobey called for volunteers, who came flocking in, along with the kapetanei and the primates. Five thousand troops assembled at the fortified mills of Lerna; others assembled at points on the marshy banks of the river Erasinos; and daily the Greeks skirmished with the Ottomans as they attempted to find water and fodder for their horses and baggage animals. Other Greek bands infiltrated the mountains which overlook the plains of Argos. On the hills extending from Lerna to the Dervenaki, Kolokotronis, who had been appointed archistratigos (commander-in-chief), concentrated no less than 8,000 men. Around Agionori there were 2,000 troops under Ypsilantis, Nikitaras and Papaflessas. Towards Nafplion large forces were assembled under Nikolaos Stamatelopoulos, the brother of Nikitaras, and these were joined by Arvanites from Kranidi, Poros and Kastri.

Kolokotronis pursued a scorched earth policy, aiming at starving the Ottomans out. The Greeks looted the villages, burned the grain and foodstuff they could not move, and damaged the wells and springs. Dramali's army was trapped in the sweltering Argolic plain. However, Kolokotronis was not in a position to coordinate all the Greek forces, for many operated under their own leaders, refusing to follow his orders. If Kolokotronis had in fact commanded the Greek armies, and thus been able draw up a general military plan, Dramali's forces might have been completely annihilated and Nafplion would have been captured with little difficulty.

Disaster in the ravines

As it was, Dramali was given the opportunity to carry out his belated decision to retreat. On 26 July he dispatched an advance guard consisting of 1,000 Muslim Albanians to occupy the passes. These troops, who were either mistaken by the Greeks for cobelligerents or deliberately allowed to pass, got through entirely unharmed. But a body of Dramali's cavalry which was following up to occupy the Dervenaki was intercepted by Nikitaras at the village of Agios Vasilis and was routed, a victory which gained for Nikitaras the name of 'Turk-eater' (Turkofagos). Very few of the Ottoman delhis (light cavalry) managed to escape; most of them had lost their horses and, as they tried to make their way on foot up the ravines of the mountains, they were almost all intercepted by small Greek bands or shot down by individual marksmen from concealed positions. During the encounter the Greeks took an enormous amount of booty - hundreds of horses and baggage animals and a considerable quantity of treasure, arms and stores.

Two days later (28 July), Dramali attempted to evacuate his main forces by way of the route through Agionori. Here he came up against the Greeks under Papaflessas who was holding the main defile (Klisoura). Unable to proceed, he soon found himself assailed by Nikitaras and Ypsilantis who made a forced march from their positions at the village of Agios Vasilis and at Agios Sostis. Although Dramali himself with the main troop of delhis managed to force his way through and finally reach Korinthos, the Greeks captured all the baggage and the military chest; and they annihilated almost completely the unmounted personnel of Dramali's army. But no sooner had they achieved victory than they dispersed: the Moreots hastened to return to their villages taking with them such animals and other booty on which they had been able to lay their hands. Had they been less intent on booty, they might have totally annihilated Dramali's army. As it was, many of the delhis lived to fight another day, but Dramali himself died, a broken man, in the following December at Korinthos. His campaign had resulted in a disaster of great magnitude: out of an army of more than 23,000 with which he entered the Morea, barely 6,000 had survived. The extent of the Ottoman defeat became proverbial in Greece, where a great defeat is still referred to as a "νίλα του Δράμαλη", i.e. "Dramali's disaster". 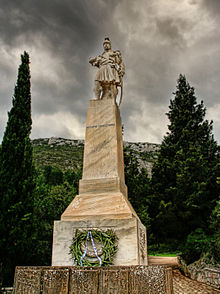 Statue of Theodoros Kolokotronis at Dervenakia.

With the destruction of the main Ottoman force present in Greece at the time, the rebellion survived its first great test, and was firmly now established. In December 1822, Nafplion finally surrendered to the Greeks, who made it their provisional capital. The Greek cause would however quickly unravel, with factional conflict breaking out in 1823. Kolokotronis himself, arguably the Greeks' ablest military leader, was imprisoned by his enemies in Palamidi, at a time when the Sultan, acknowledging his inability to deal with the "Greek problem", turned to Muhammad Ali of Egypt and his Western-trained armies for help.