The Battle of Diu, sometimes referred to as the Second Battle of Chaul, was a naval battle fought on 3 February 1509 in the Arabian Sea, near the port of Diu, India, between the Portuguese Empire and a joint fleet of the Sultan of Gujarat, the Mamlûk Burji Sultanate of Egypt, the Zamorin of Calicut with support of Ottomans, the Republic of Venice and the Republic of Ragusa (Dubrovnik).[2]

The Portuguese victory was critical: the Mamluks and Arabs retreated, easing the Portuguese strategy of controlling the Indian Ocean to route trade down the Cape of Good Hope, circumventing the traditional spice route controlled by the Arabs and the Venetians through the Red Sea and Persian Gulf. After the battle, Portugal rapidly captured key ports in the Indian Ocean like Goa, Ceylon, Malacca and Ormuz, crippling the Mamluk Sultanate of Egypt and the Gujarat Sultanate, greatly assisting the growth of the Portuguese Empire and establishing its trade dominance for almost a century, until it was lost during the Dutch-Portuguese War and the Battle of Swally won by the British East India Company in 1612. It marks the beginning of European colonialism in Asia. It also marks the spillover of the Christian-Islamic power struggle, in and around the Mediterranean Sea and the Middle East, into the Indian Ocean, which was the most important region for international trade at the time.

Since Vasco da Gama arrived in 1498, the Portuguese had been fighting Calicut while allying with its local rival Kingdom of Cochin, where they established their headquarters. The northern region of Gujarat, mainly Khambhat, was even more important: the Gujarat Sultanate was an essential intermediary in east–west trade, between the Red Sea, Egypt and Malacca: Gujarati were important middlemen bringing spices from the Maluku Islands as well as silk from China, and then selling them to the Egyptians and Arabs.[3]

In 1505, the King of Portugal, Manuel I, sent his first viceroy, Dom Francisco de Almeida with twenty one vessels to strengthen the fledgling Portuguese empire in East Africa and India. When Portugal threatened his field, Sultan Mahmud Begada of Gujarat allied with the Kozhikkodu Samutiri (anglicised to Zamorin of Calicut). He then asked his trade partners, the Mamluk Sultanate, for help.[4]

In 1507, Portuguese forces under command of Afonso de Albuquerque had conquered Socotra in the mouth of the Red Sea and, for a short time, Ormuz in the Persian Gulf. Portuguese intervention was seriously disrupting trade in the Indian Ocean, threatening Muslim as well as Venetian interests, as the Portuguese became able to undersell the Venetians in the spice trade in Europe. The Mamluks and their European trade partners, the Venetians, had become wealthy from monopolizing the flow of spices from India to Europe. Venice broke diplomatic relations with Portugal and started to look at ways to counter its intervention in the Indian Ocean, sending an ambassador to the Egyptian court.[5] Venice negotiated for Egyptian tariffs to be lowered to facilitate competition with the Portuguese, and suggested that "rapid and secret remedies" be taken against the Portuguese.[5] The sovereign of Calicut, the Zamorin, had also sent an ambassador asking for help against the Portuguese.[1]

Egyptian Mamluks soldiers had little expertise in naval warfare, and Portuguese often attacked and stole supplies of Malabar timber from India, so Mamluk Sultan, Al-Ashraf Qansuh al-Ghawri appealed to Ottoman support. The Ottoman Sultan, Beyazid II - whose navy had helped Spanish Moors and Sephardic Jews expelled by the Spanish Inquisition in 1492- supplied Egypt with Mediterranean-type war galleys manned by Greek sailors and Ottoman volunteers, mainly Turkish mercenaries and freebooters.[6] These vessels, which Venetian shipwrights helped disassemble in Alexandria and reassemble on the Red Sea coast, had to brave the Indian Ocean. The galley warriors could mount light guns fore and aft, but not along the gunwales because these cannon would interfere with the rowers. The native ships (dhows), with their sewn wood planks, could carry no heavy guns at all. Hence, most of the coalition's artillery was archers, whom the Portuguese could easily outshoot.

The Egyptian-Ottoman fleet, whom the Portuguese called under the generic term the "rumes",[7] was sent for India to support Gujarat in 1507. First they fortified Jeddah against a possible Portuguese attack, it then passed through Aden at the tip of the Red Sea, where they received support from the Tahirid Sultan, and then, in 1508, crossed the Indian Ocean to the port of Diu, a city at the mouth of the Gulf of Khambhat.[8]

In March 1508, commanded by Mamluk admiral Mirocem (Amir Husain Al-Kurdi) or Admiral (Husain Al-Kurdi), the Egyptian Mamluk fleets arrived at Chaul in India where they surprised a Portuguese fleet commanded by Lourenço de Almeida, son of the Portuguese viceroy. Joined by Gujarat admiral Malik Ayyaz, governor of Diu, they fought over three days and won the Battle of Chaul. The Egyptian fleet isolated Lourenço de Almeida's ship, but let the others escape, taking nine captives back to Diu. The Mirat Sikandari, a Persian account of the Kingdom of Gujarat details this battle as a minor skirmish.[9] Having taken the prisoners they headed to Diu. Enraged at the death of his son, the Portuguese viceroy Francisco de Almeida sought revenge.

Precursor to the battle

Diu was a critical outpost in the overall spice trade from India. The Portuguese attempt to establish trade with India would require the breaking of this strongly defended and lucrative trade network. In addition to enforcing Portuguese rule, the battle was undertaken as a personal issue by Portuguese viceroy Francisco de Almeida to avenge the death of his son Lourenço at the hands of the Mirocem (Amir Husain Al-Kurdi). He was so enraged at this death that he is supposed to have said, "He who ate the chick must also eat the rooster, or pay for it". Francisco de Almeida had rushed to chase the Egyptian fleet because Afonso de Albuquerque arrived on 6 December 1508 with orders from the King of Portugal to replace him as the next viceroy. His plan was such a personal issue that he threw Afonso de Albuquerque in jail after being informed of the King's orders, then advancing to the battle.

Aware of the danger facing his city, Malik Ayyaz prepared his defense and wrote to appease the viceroy, stating that he had the prisoners and how bravely his son had fought, adding a letter from the Portuguese prisoners stating that they were well treated.[10] The viceroy answered Malik Ayyaz (referred to as Meliqueaz in Portuguese) with a respectful but menacing letter, stating his intention of revenge, that they better join all forces and prepare to fight or he would destroy Diu:

In a double bind—Malik Ayyaz fearing the destruction of his city, and Mirocem beset in it—they faced the Portuguese forces.

The Portuguese had eighteen ships commanded by the Viceroy, with about 1,500 Portuguese soldiers and 400 local combatants from Cochin. The Allied side had one hundred ships, but only twelve were major vessels; the rest were small shallow-draught craft. After detecting the Portuguese, who approached from Cochin to the north, and fearing their technical superiority, the Egyptians decided to take advantage of the port of Diu and its fort, which had its own artillery. It was therefore decided to stay anchored at the port and await an attack from the Portuguese. This may also have been due to the training of the Egyptians, who were used to the more sheltered bays in the Mediterranean. There they also relied upon land-based artillery reinforcements to defeat the enemy. The Portuguese started the battle with a massive naval bombardment using their on board artillery, followed by hand-to-hand combat in the harbour of Diu.

These Portuguese ships had guns of greater caliber, better artillery crews, and were better manned and better built. The Portuguese naval infantry also had an advantage over the Egyptian Mamluks, not only because they were heavily armed and equipped (armour, arquebuses and a type of grenade made of clay with gunpowder inside), but also because they were seasoned professional seamen.

The tough state-of-the art multi-rigged Portuguese carracks and smaller fast caravels had been developed over the previous decades to cope with the storms of the Atlantic Ocean and were bristling with cannons. The smaller Indian Ocean dhows and Mediterranean-type galleys launched by the coalition of the Samoothiri Raja, Gujarat and Egypt were no match. The Portuguese ships were able to shoot their powerful cannons and thus dissuade the smaller craft from coming near them. Even when they did come near, the smaller galleys and dhows were low in the water, and so unable to board the Portuguese ships, while being sprayed from above with small arms, grenades and smaller caliber cannon. 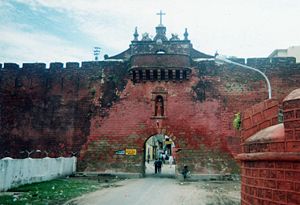 Diu Fort eventually built in 1535 after a defense alliance was sealed between the Portuguese and Sultan Bahadur Shah by the Treaty of Bassein (1534), when Mughal Emperor Humayun waged war to annex the territory. 1521 and 1531 Portuguese attempts to seize the island by force had failed. 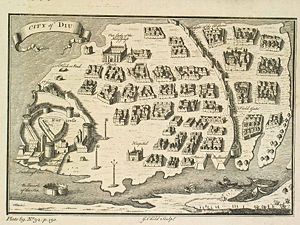 The battle ended in victory for the Portuguese, with terrible losses on the Gujarat-Mamluk-Kozhikode side, who fought bravely but were at a loss as to how to counter a naval force, the like of which they had never seen before. After the battle, Malik Ayyaz handed over the prisoners of Chaul, dressed and well fed. To his surprise, Francisco de Almeida, who was ending his term as viceroy, refused his offer to allow a Portuguese fortress be established in Diu, an offer that the Portuguese soon sought ardently, and which he manage to stall for as long as he was governor of Diu.

The spoils of the battle included three royal flags of the Mamlûk Sultan of Cairo that were sent to Portugal and are even today displayed in the Convento de Cristo, in the town of Tomar, spiritual home of the Knights Templar. The Viceroy extracted a payment of 300,000 gold xerafins, but rejected the offer of the city of Diu which he thought would be expensive to maintain, although he left a garrison there. The Portuguese prisoners from the Battle of Chaul were also rescued. The treatment of the Egyptian captives by the Portuguese was brutal. The Viceroy ordered most of them to be hanged, burned alive or torn to pieces by tying them to the mouths of the cannons, in retaliation for his son's death. Commenting on the battle after winning it, Almeida said: "As long as you may be powerful at sea, you will hold India as yours; and if you do not possess this power, little will avail you a fortress on the shore."[11] Interestingly, after handing over the Viceroy's post to his successor, Dom Afonso de Albuquerque, Almeida left for Portugal in November, 1509, and in December, 1509 was himself killed by the Khoikhoi tribe, near the Cape of Good Hope, Africa.

This battle did not end the Portuguese-Ottoman rivalry. A second naval battle occurred 30 years later in the Siege of Diu in 1538 when the Turks laid siege with 54 ships to the fortress which was built by the Portuguese in 1535, but then after suffering terrible defeats they lifted the siege. Suleiman I the Magnificent sent his admiral Hussein Pasha for another siege of the fortress at Diu in 1547 which, upon failing, marked the end of Ottoman attempts to expand their influence in the Indian Ocean.