The Battle of Dunbar (3 September 1650) was a battle of the Third English Civil War. The English Parliamentarian forces under Oliver Cromwell defeated a Scottish army commanded by David Leslie which was loyal to King Charles II, who had been proclaimed King of Scots Charles was pronounced King of Great Britain, Ireland and France on 5 February 1649. The battlefield has been inventoried and protected by Historic Scotland under the Historic Environment (Amendment) Act 2011.[4]

Although the Scottish and English parliaments were initially allies in the Wars of the Three Kingdoms, they did not remain so for the entire conflict. Differences in approaches to religion eventually came to the fore with the rise in power and influence of an Independents faction in the English Parliament, in particular its dominance of the New Model Army which alarmed the still Presbyterian-dominated Scottish Parliament. This was not what Scotland's Presbyterian commissioners had envisioned when they signed the Solemn League and Covenant along with their English counterparts. Thus there came a gradual realisation among some Covenanting Scots that a rapproachement or engagement with the King was perhaps the only way to achieve the "true religion" throughout Britain. This idea was hotly contested in Scotland. Only a few were willing to act on such a proposal when the so-called Engagers, unable to persuade the whole Covenanting movement of the wisdom of their strategy, decided they would show their compatriots the way through action rather than words. They invaded England in 1648 without the approval of the Scottish Parliament or General Assembly. However, the Duke of Hamilton proved to be a poor general and was easily defeated by the English parliamentary forces at the Battle of Preston. After the defeat of the Engagers the opposing Kirk Party seized control of the wheels of government in Scotland, with the result that from this point on more power was held by Presbyterian ministers than by Presbyterian nobles such as the Earl of Argyll. Not surprisingly, with the declining power and influence of the moderately Royalist Presbyterians and the rise of the more militantly Covenanter Kirk Party, the Scottish government became even more overtly and rigidly Presbyterian. Those who had opposed engaging with the King in 1648 were now effectively governing Scotland. However, even the most militant of Covenanters realised that the English Parliament was never going to enact the Westminster Confession and that the only chance of their Presbyterianism being instituted throughout Britain was through its acceptance by the King. Thus it was that on 23 June 1650 Charles II landed in Scotland at Garmouth in Moray and by prior agreement, despite his Anglican and Roman Catholic sympathies, signed on his arrival the 1638 National Covenant and 1643 Solemn League and Covenant before being proclaimed King of Scots. This infuriated the English Parliament's Council of State who decided on a pre-emptive invasion of Scotland. Sir Thomas Fairfax, the Army's commander, disagreed with this strategy against Protestant "brethren" and resigned; his generalship being taken by Oliver Cromwell. John Lambert was made Sergeant Major General and appointed as the Army's second-in-command.

As Cromwell led his army over the border at Berwick-upon-Tweed in July 1650, the Scottish general, Sir David Leslie, continued his deliberate strategy of avoiding any direct confrontation with the enemy. His army were no longer the battle-hardened veterans of the Thirty Years' War who had taken the field for the Scots at Newburn and Marston Moor. Many of them had perished during the Civil War and the ill fated 1648 invasion of England. Far more had left active service after the former event. This meant that a new army had to be raised and trained by the remaining veterans. It eventually comprised some 12,000 soldiers,[1] outnumbering the English army of 11,000 men.[2] Though the Scots were well armed, the pressure of time meant they were poorly trained compared with their English counterparts, all of whom had served with Oliver Cromwell for years. Leslie chose therefore to barricade his troops behind strong defensive works around Edinburgh and refused to be drawn out to meet the English in battle. Furthermore, between Edinburgh and the border with England, Leslie adopted a scorched earth policy thus forcing Cromwell to obtain all of his supplies from England, most arriving by sea through the port at Dunbar.

Whether in a genuine attempt to avoid prolonging the conflict or whether because of the difficult circumstances he found himself in, Cromwell sought to persuade the Scots to accept the English point of view. Claiming that it was the King and the Scottish clergy who were his enemies rather than the Scottish people, he wrote to the General Assembly of the Kirk on 3 August famously pleading, "I beseech you, in the bowels of Christ, think it possible you may be mistaken." This plea, however, fell on deaf ears.

By early September, the English army, weakened by illness and demoralised by lack of success, began to withdraw towards its supply base at Dunbar. Leslie, believing that the English army was retreating, ordered his army to advance in pursuit. The Scots reached Dunbar first and Leslie positioned his troops on Doon Hill on the eastern edge of the Lammermuir Hills,[5] overlooking the town and the Berwick Road, which was Cromwell's land route back to England. Cromwell wrote to the governor of Newcastle:

We are upon an engagement very difficult. The enemy hath blocked up our way at the pass of Copperspath, through which we cannot get without almost a miracle. He lieth so upon the hills that we know not how to come that way without great difficulty; and our lying here daily consumeth our men, who fall sick beyond imagination. 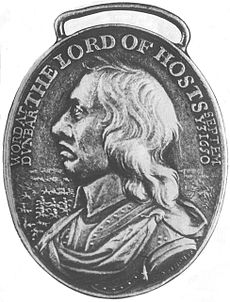 However, the Scots army, commissioned and funded by the Committee of Estates and Kirk representing the Scottish Parliament and the Church of Scotland,[7] manoeuvred itself into a new position, a move that turned out to be a major tactical blunder. Eager to curtail the mounting cost of the campaign, the ministers of the Kirk in attendance are said to have put Leslie under great pressure to press on with an attack. On 2 September 1650, he brought his army down from Doon Hill and approached the town, hoping to secure the road south over the Spott Burn in preparation for an attack on Cromwell's encampment. Witnessing Leslie's men wedge themselves between the deep ditch of the Spott Burn, and the slopes of the Lammermuirs behind them, Cromwell quickly realised that here was an opportunity for him to turn the tables on the Scots. He knew that an attack on the Scottish right flank would leave the left flank unengaged and that a successful push against the right would roll back the latter. On observing the Scots manouevring into their new positions, he is said to have exclaimed, "The Lord hath delivered them into our hands!"[8]

The Major-General [Lambert] and myself coming to the Earl of Roxburgh's House [Brocksmouth House], and observing this posture, I told him I thought it did give us an opportunity and advantage to attempt upon the Enemy. To which he immediately replied, That he had thought to have said the same thing to me. So that it pleased the Lord to set this apprehension upon both of our hearts, at the same instant. We called for Colonel Monk, and showed him the thing: and coming to our quarters at night, and demonstrating our apprehensions to some of the Colonels, they also cheerfully concurred.

That night, under cover of darkness, Cromwell stealthily redeployed a large number of his troops to a position opposite the Scottish right flank. Just before dawn on 3 September, the English troops, shouting their battle cry "The Lord of Hosts!", launched a surprise frontal attack on the Scots, while Cromwell engaged their right flank. Soldiers in the English centre and on the right caught Leslie's men unawares but were held at bay by the long pikes of their Scottish opponents. The right flank of the Scots, however, with less freedom to manoeuvre, was pushed back under the weight of superior English numbers until its lines started to disintegrate. Cromwell's horse then clashed furiously with the Scottish cavalry and succeeded in scattering them. Observing this disaster, the rest of the Scottish army, hopelessly wedged between the Spott or Brox Burn and Doon Hill, lost heart, broke ranks and fled. Cromwell's secretary Rushworth wrote:

I never beheld a more terrible charge of foot than was given by our army, our foot alone making the Scots foot give ground for three-quarters of a mile together.

In the rout that followed, the English cavalry drove the Scots army from the field in disorder.[11] Cromwell reported to Parliament that the "chase and execution" of the fleeing Scots had extended for eight miles.[12]

Cromwell claimed that 3,000 Scots were killed.[3] On the other hand, Sir James Balfour, a senior officer with the Scottish army, noted in his journal that there were "8 or 900 killed".[3] There is similar disagreement about the number of Scottish prisoners taken: Cromwell claimed that there were 10,000,(Cromwell said in his letter to Parliament that he had dismissed 5,000 men because they were Starved, sick or wounded. (Ref:Thomas Carlyle, Letters and speeches)[3] while the English Royalist leader, Sir Edward Walker put the number at 6,000, of which 1,000 sick and wounded men were quickly released.[3] The more conservative estimates of the Scottish casualties are borne out by the fact that, the day after the battle, Leslie retreated to Stirling with some 4,000-5,000 of his remaining troops.[3]

In his post-battle report to the Speaker of the English Parliament, Cromwell described the victory as "...one of the most signal mercies God hath done for England and His people...".[13] As a result of the destruction of the Scottish army, he was able to march unopposed to Edinburgh and quickly occupied the Scottish capital, although Edinburgh Castle held out until the end of December. The prisoners taken at Dunbar were force-marched south towards England in order to prevent any attempt to rescue them.(and because it would be impossible to release the men into the local community) The conditions on the march were so appalling that many died of starvation, illness or exhaustion. By 11 September, when the remnants arrived at Durham Cathedral where they were to be imprisoned, only 3,000 Scottish soldiers were still alive.[14] If Sir Edward Walker's statement is correct, that 6,000 prisoners were taken and 5,000 of them were marched south,[3] then 2,000 captives perished on the way to Durham. Even today, where, between Dunbar and Durham would you find food for up to 4,500 people?

Of the estimated 5,000 Scottish soldiers that began the march southwards from Dunbar, over 3,500 died either on the march or during imprisonment in Durham Cathedral, more than the total number killed on the battlefield In Arthur Heslerig's letter to parliament on 2nd October, He says that he received 3,000 prisoners at Durham and says that the prisoners had not been 'told' (counted) at Berwick. Of the 1,400 survivors, the majority were eventually transported as convict labourers to English colonies in New England, Virginia and the Caribbean.[15][lower-alpha 1][lower-alpha 2] After formally accepting the Solemn League and Covenant, Charles was finally crowned King in Scotland on 1 January 1651.