The Battle of Eupatoria (Russian: Штурм Евпатории (Storm of Eupatoria), Turkish: Gözleve Muharebesi) was the most important military engagement of the Crimean War on the Crimean theatre in 1855 outside Sevastopol. 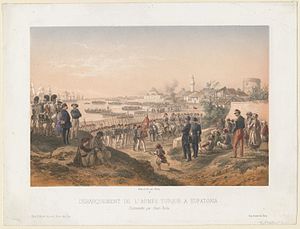 Landing of the Turkish army at Eupatoria E. Morier, 1855

Ottoman forces were being transferred from the Danube front to the Crimean port of Eupatoria and the town was being fortified. Upon direct orders from the Czar who feared a wide-scale Ottoman offensive on the Russian flank, a Russian expeditionary force was formed under General Stepan Khrulev aiming to storm the base with a force variously estimated between 20,000 to 30,000.

This reverse led to the dismissal of the Russian Commander-in-Chief Alexander Sergeyevich Menshikov and probably hastened the death of Nicholas I of Russia, who died several weeks after the battle.[citation needed]

As for the battle's strategic importance, it confirmed that allied total command of the sea would ensure that the threat to the Russian flank would remain for the duration of hostilities. For the allies, possession of Eupatoria meant that the total investment of Sevastopol remained a viable option. For the Russians, they could not afford to commit unlimited resources from their vast army to the Crimea, for fear of a lightning allied thrust from Eupatoria closing the neck of the peninsula at Perekop.

For the Ottomans, their Army had regained its self-esteem and to some extent its reputation; most French and British realised this, although others including the high command would stubbornly refuse to make further use of their fighting abilities in the Crimean theatre.