For the battle in 1746 see Battle of Falkirk Muir.

The Battle of Falkirk, (Blàr na h-Eaglaise Brice in Gaelic) which took place on 22 July 1298, was one of the major battles in the First War of Scottish Independence. Led by King Edward I of England, the English army defeated the Scots, led by William Wallace. Shortly after the battle Wallace resigned as Guardian of Scotland.

King Edward I was campaigning against the French in Flanders when he learned of the defeat of his northern army at the Battle of Stirling Bridge. After concluding a truce with Philip the Fair, he returned to England in March 1298 and immediately began organising an army for his second invasion of Scotland. As a preliminary step he moved the centre of government to York, where it was to remain for the next six years. A council-of-war was held in the city in April to finalise the details of the invasion. The Scottish magnates were all summoned to attend, and when none appeared they were all declared to be traitors. Edward then ordered his army to assemble at Roxburgh on 25 June. The force he gathered was impressive: over 2,000 men-at-arms (armoured cavalry) and 12,000 infantry receiving wages, though, after the manner of medieval armies there would have been many more serving without pay either as a statement of personal independence, forgiveness of debts to the crown, criminal pardons or just for adventure,[5] including 10,900 Welshmen[6] armed with the longbow.

Edward advanced into central Scotland and Wallace's army shadowed the English, intending to avoid battle until shortages of supplies and money forced Edward to withdraw, at which point the Scots would harass his retreat. Edward's own supply fleet was delayed by bad weather, and when the army reached central Scotland it was both tired and hungry. The Welsh infantry in particular were badly demoralised. While the army was encamped at Temple Liston, near Edinburgh, they erupted in a drunken riot that was broken up by the English cavalry, who killed 80 Welshmen. Edward faced the prospect of the kind of ignominious retreat that became a regular feature of his son's campaigns in the succeeding reign. As he was on the point of falling back on Edinburgh he received intelligence that Wallace had taken up position in the wood of Callendar near Falkirk,[7] only thirteen miles away, ready to pursue the retreating English. Edward was delighted: As God lives... they need not pursue me, for I will meet them this day. 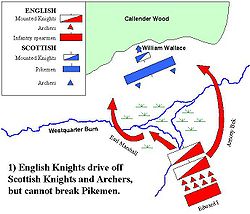 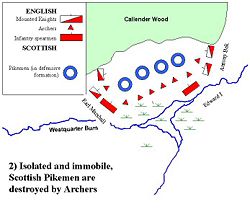 The Scots army, again made up chiefly of spearmen as at Stirling, was arranged in four great armoured 'hedgehogs' known as schiltrons. The long spears (pikes) pointed outwards at various heights gave these formations a formidable and impenetrable appearance. The gaps between the schiltrons were filled with archers and to the rear there was a small troop of men-at-arms, provided by the Comyns and other magnates.

On Tuesday 22 July, the English cavalry, divided into four battalions, finally caught sight of their elusive enemy. The left was commanded by the Earls of Norfolk, Hereford and Lincoln. The right was under the command of Antony Bek, Bishop of Durham, while the King commanded the centre, still a little distance to the rear of the vanguard. Once in sight of the enemy, Norfolk and his colleagues began an immediate attack, but on encountering a small marsh to the front of the Scots position, made a long detour to the west before being able to make contact with the right of Wallace's army. Bek tried to hold back his own battalion to give the King time to get into position but he was overruled by his impatient knights, who were anxious to join their comrades on the left in an immediate attack. In a disorganised pell-mell the cavalry finally closed on the Scots, on the right and left. The party of men-at-arms under John Comyn left the field immediately.

The Scots bowmen commanded by Sir John Stewart of Bonkill, the younger brother of the High Steward of Scotland, stood their ground and were quickly destroyed. But the schiltrons held firm, with the knights making little impression on the dense forest of long spears, and a small number of riders being killed under their horses. King Edward arrived in time to witness the discomfiture of his cavalry and quickly restored discipline. The knights were ordered to withdraw and Edward prepared to employ the tactics that the Earl of Warwick had used to defeat the Welsh spearmen at the Battle of Maes Moydog in 1295. The Scottish cavalry charged the English cavalry, but seeing the vast numbers that were formed against them they then fled the field, abandoning their fellow Scottish comrades to the slaughter. Edward's longbowmen were brought into place and quickly overcame the inexperienced force of badly armed Scottish archers. The schiltrons were an easy target; they had no defence and nowhere to hide. The hail of arrows was supplemented by crossbow and slingshot. Unable to retreat or attack, the battle was lost for the Scots almost as soon as the first arrows began to fall. The English cavalry waited, this time observing the King's command, until the Scots ranks were thin enough to allow them to penetrate the Scottish formation and finish the job. A great many Scots were killed, including Macduff, son of the Earl of Fife. The survivors, Wallace included, escaped as best they could, mostly into the nearby forest of Torwood where their pursuers could not safely follow.

Casualties among the Scottish leaders were not particularly heavy, but did include Wallace's second-in-command Sir John de Graham, Sir John Stewart of Bonkill, and Macduff of Fife.

The Falkirk Roll of Arms

The Falkirk Roll is a collection of the arms of the English bannerets and noblemen present at the battle of Falkirk. It is the oldest known English occasional roll of arms, and contains 111 names and blazoned shields.[8]

Following are a collection of modern illustrations of the Falkirk Roll based on the blazons published in Henry Gough's book, Scotland in 1298. Documents Relating to the Campaign of King Edward the First.[8]

In the year 1298, the aforesaid king of England, taking it ill that he and his should be put to so much loss and driven to such straits by William Wallace, gathered together a large army, and, having with him, in his company, some of the nobles of Scotland to help him, invaded Scotland. He was met by the aforesaid William, with the rest of the magnates of that kingdom ; and a desperate battle was fought near Falkirk, on the 22d of July. William was put to flight, not without serious loss both to the lords and to the common people of the Scottish nation. For, on account of the ill-will, begotten of the spring of envy, which the Comyns had conceived towards the said William, they, with their accomplices, forsook the field, and escaped unhurt. On learning their spiteful deed, the aforesaid William, wishing to save himself and his, hastened to flee by another road. But alas ! through the pride and burning envy of both, the noble Estates (communitas) of Scotland lay wretchedly overthrown throughout hill and dale, mountain and plain. Among these, of the nobles, John Stewart, with his Brendans ; Macduff, of Fife ; and the inhabitants thereof, were utterly cut off. But it is commonly said that Robert of Bruce, — who was afterwards king of Scotland, but then fought on the side of the king of England — was the means of bringing about this victory. For, while the Scots stood invincible in their ranks, and could not be broken by either force or stratagem, this Robert of Bruce went with one line, under Anthony of Bek, by a long road round a hill, and attacked the Scots in the rear ; and thus these, who had stood invincible and impenetrable in front, were craftily overcome in the rear. And it is remarkable that we seldom, if ever, read of the Scots being overcome by the English, unless through the envy of lords, or the treachery and deceit of the natives, taking them over to the other side.