From Infogalactic: the planetary knowledge core
Jump to: navigation, search
For other uses, see Battle of Fleurus.

The Battle of Fleurus, fought on 1 July 1690, was a major engagement of the Nine Years' War. In a bold envelopment the Duc de Luxembourg, commanding Louis XIV’s army of some 35,000 men, soundly defeated Prince Waldeck’s Allied force of approximately 38,000 men comprising mainly Dutch, German, and Spanish troops.[1] Waldeck's German-Spanish-English forces were decisively defeated, with heavy losses in prisoners and equipment, and Luxembourg moved ahead to control Flanders.[4] Although the French War Minister, Louvois, wished to press ahead and secure further success, Louis overruled him and ordered Luxembourg to reinforce the Dauphin’s army on the Rhine and forgo any major siege. The Allies, meanwhile, withdrew to Brussels to recover and rebuild their army.

In 1690 the main theatre of the Nine Years' War moved to the Spanish Netherlands. Command of French forces now passed to the talented Marshal Luxembourg (a position he would keep until his death in 1695), superseding Marshal Humières who had suffered defeat at the Battle of Walcourt the previous year. Luxembourg's army consisted of 34 battalions and 94 squadrons; if necessary he could call upon support from Marshal Boufflers’ forces on the Moselle.[5]

Once again King William entrusted Allied forces in the region to Prince Waldeck (William was himself busy in Ireland forestalling King James' attempt to regain his throne). In other theatres Marshal de Lorge commanded French forces in the Rhineland, (although the Dauphin held honorific command). De Lorge was opposed by the Elector of Bavaria, who had succeeded command of Allied forces in the region after the death of Charles of Lorraine. Meanwhile, Marshal Catinat led the French forces in Dauphiné against the Duke of Savoy, whilst Marshal Noailles commanded forces deployed on the border of Catalonia.[5]

Prince Waldeck had hoped to delay the campaign to enable the Elector of Brandenburg to move on the Moselle and tie down Boufflers, but Luxembourg’s early manoeuvres had allowed Boufflers to move between the rivers Sambre and Meuse to support the French commander. Waldeck, meanwhile, left his assembly point at Tienen (Tirlemont) and advanced to Wavre. After dispersing his troops to live off forage, the Allied army reassembled and advanced to Genappe on 8 June.

In mid-June Luxembourg split his forces. Humières was relegated to supervise the garrison of the Lines of the Lys and the Scheldt, whilst the main French army left Deinze and marched south, crossing the River Sambre at Jeumont on 23 June.[6] Meanwhile, detachments from Boufflers force under Rubantel had augmented Luxembourg’s army, which continued its march, camping at Boussu on 27 June.

As Luxembourg manoeuvred south of Mons and Charleroi, Waldeck moved his camp between Nivelles and Pieton on 28 June. That same evening, Luxembourg personally led a detachment from Gerpinnes (together with bridging pontoons), to establish a crossing of the Sambre at Ham. A fortified position at Froidmont (garrisoned by about 100 men) was soon compelled to surrender after artillery was brought across the river; a simultaneous attack by French dragoons seized an enemy redoubt that had been abandoned at the approach of Luxembourg’s army.[6] With the bridgehead secure, the rest of the French army (apart from the heavy baggage that had remained on the south bank at Ham) crossed the Sambre on 30 June. (See map).

Waldeck decamped and moved towards the French bridgehead. French and Dutch cavalry sent out to reconnoitre the area crossed swords in an inconclusive action near Fleurus, but by evening the French cavalry had withdrawn to Velaine where it was joined by the rest of their army, only 3 km (< 2 miles) from the Allies.

The Spanish Netherlands. Fleurus sits midway between Namur and Charleroi near the Sambre River.

On the morning of 1 July, Luxembourg marched his forces towards Fleurus. Waldeck had set up his 38,000 troops in the two customary lines on the high ground between the village of Heppignies on their right and past the chateau of St Amant on their left; Waldeck’s front was covered by the Orme stream whose elevated banks made a frontal assault all but impossible.[1] Luxembourg divided his forces to attack both flanks of the Allied army – an audacious plan that in order for it to succeed would require secrecy and deception. The columns of the first French line split to take position between Heppignies and Fleurus, with some troops moving up towards St Amant. The two columns of Luxembourg’s right veered off to the north across the Orme, their passage covered by the hedges and wheat fields, and by a screen of French cavalry. Forty cannon were positioned near the chateau of St Amant, and another 30 guns positioned between the chateau and Fleurus. 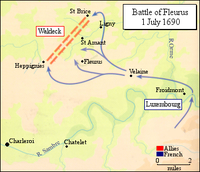 Luxembourg divides his forces and attacks Waldeck’s army on both flanks.

Unnoticed by Waldeck, Luxembourg had enveloped his flanks. Had the Allied commander realised that Luxembourg had split his army in two, he might have overwhelmed the isolated French left before the right came into position, but he did not.[1] After the French right wing was in position (commanded by Luxembourg himself), their artillery opened fire at about 10:00, striking the Allied infantry with great effect. The French left wing, commanded by Lieutenant-General Jean Christophe, comte de Gournay, opened their attack with a cavalry charge but Gournay was killed in the assault; his death disordered his cavalry who retired to Fleurus to regroup.[7] A cavalry charge on the right wing however, met with more success, driving the enemy cavalry back. On the heels of this attack, the French infantry now advanced against both flanks of Waldeck’s line which, finding itself enveloped by the enemy, finally broke. Some of the Allied troops managed to regroup on high ground near Fleurus, but were eventually overwhelmed.

Despite being pressed by French cavalry, Waldeck was able to create a new line with his remaining forces further back. However, this line also collapsed, broken by French infantry flushed with confidence from their initial success. The remainder of Waldeck’s troops streamed towards Nivelles in the best order they could.[7]

The Battle of Fleurus was a complete success, but devoid of result.[8] Louvois, Louis’ war minister, wanted to order Luxembourg to immediately besiege Namur or Charleroi, but King Louis, concerned about the dauphin’s forces on the Rhine, ordered Luxembourg to detach part of his forces and forgo a major siege. Louvois objected, but King Louis wanted to be sure that nothing ‘disagreeable’ happened to his son’s command.[9] Nevertheless, Luxembourg was able to put much of the land east of Brussels under contribution.[10]

Waldeck eventually retired on Brussels where his injured troops were replaced with men from fortress garrisons.[10] Spanish troops under the Marquis of Gastañaga joined the main Allied army, as did the Count of Tilly with troops from Liège and Brandenburg on 22 July. On 2 August, the Elector of Brandenburg’s forces combined with Waldeck whose Allied army now numbered 55,000 men. With this force, the Allied army marched to Genappe, proceeding on to Nivelles on 7 August.

The remainder of the campaign season in the Spanish Netherlands was relatively quiet. Boufflers temporarily combined his forces with Luxembourg, but in late August he returned to the area between the Sambre and Meuse rivers. After a series of minor skirmishes both the Allies and the French returned to winter quarters in October; Luxembourg careful to station his men on enemy territory, while the Allies quartered in and around Maastricht. The Hanoverians returned home while many from Brandenburg and Lüneburg found quarters in the fortresses of the Spanish Netherlands.[11]