From Infogalactic: the planetary knowledge core
Jump to: navigation, search
This article is about the battle in 1622. For the battle in 1795, see Battle of Höchst (1795).

The Battle of Höchst (20 June 1622) was fought between a combined Catholic League army led by Johan Tzerclaes, Count of Tilly and Gonzalo Fernández de Córdoba and a Protestant army commanded by Christian the Younger, Duke of Brunswick-Lüneburg. The result was a one-sided Catholic League victory. Höchst is a district within the city of Frankfurt, Germany. The action occurred during the Thirty Years' War.

In April 1622, Tilly had lost the Battle of Mingolsheim to Ernst von Mansfeld and Georg Friedrich, Margrave of Baden-Durlach. He withdrew his weakened army towards Würzburg, and the Electorate of the Palatinate remained unprotected by the Catholic forces.[clarification needed]

Christian wanted to use the situation for a crucial strike against the Catholic League. With 12,000 infantrymen, nearly 5,000 cavalrymen and three guns he moved from Westphalia along the Weser River shoreline, and through Hesse towards the Main River to unite his troops with armies of Mansfeld and Baden-Durlach, at Darmstadt. Continuing their mission of blocking a rendezvous between Mansfeld and Christian of Brunswick, the Catholic forces reached the river at Höchst on June 20 to find Christian's army already crossing the river.

On 15 June 1622, Christian reached the territory of the Archbishopric of Mainz at Oberursel. He sent Colonel Dodo zu Innhausen und Knyphausen with an advance guard of 1,500 men against Höchst to take the town in a coup de main and to safeguard the Main crossing point. However, the Höchst municipal troops successfully defended the town against Knyphausen's initial assault. On the 16th Knyphausen's troops finally stormed and plundered Höchst.

Two days later the Protestants started building a pontoon bridge across the Main. Meanwhile Christian moved with his troops towards Höchst and destroyed the villages of Oberusel, Eschborn and Sulzbach. At the same time the Catholic troops approached in forced marches from Würzburg with 20,000 infantrymen, 6,000 cavalrymen and 18 guns. On 19 June, they arrived at the Nidda River between Nied and Sossemheim late at night.

When the bridge was completed in the morning of 20 June, Christian's baggage started to cross the river. Christian formed his troops to fight the Catholics at Sossenheim. Meanwhile Tilly's troops were reinforced by an army under General Franz von Hövelberg. They planned to force Christian's troops back to the Höchst walls and the Main. Hence, Christian ordered his troops to withdraw over the pontoon bridge towards Kelsterbach, but under the Catholic artillery fire the withdrawal turned into a headlong flight. The bridge broke and many of Christian's soldiers drowned in the Main. According to old chronicles, the Protestants lost more Lansquenets from drowning than in the battle itself.[citation needed] 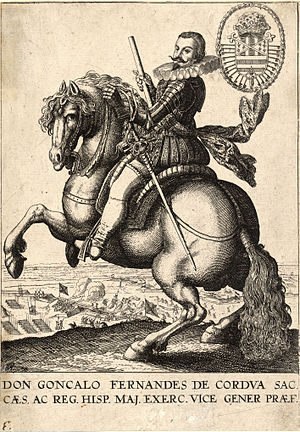 Córdoba and Tilly claimed a strategic victory because they had fewer losses, despite the fact that Christian of Brunswick had achieved his operational goal of uniting his army with Mansfeld's.

Höchst was the final battle for the Electorate of the Palatinate and the impending actions of Mansfeld and Christian signalled the end for "The Winter King" Frederick V. Shortly after the battle, the combined Protestant forces, now numbering 25,000 strong, compared to the Catholics in numbers, positioned themselves on the western bank of the Rhine River. Heidelberg came under siege and despite an 11-week resistance, fell on 19 September 1622.

With this news, the token English forces under Sir Horace Vere evacuated Mannheim and moved to the fortress of Frankenthal, which served as a final outpost for Protestant resistance in this area. It fell the following year.

Illustrations of the battle

The Swiss engraver Merian depicted the battle and the bridging of the Main in an engraving. Another contemporary engraving of an unknown artist shows the battle in a large panorama. The Flemish painter Pieter Snayers portrayed the battle in a monumental painting that today is on exhibition in a museum in Brussels. Neither of these artists had been an eye witness of the event.