The Battle of Hakodate (函館戦争, Hakodate Sensō?) was fought in Japan from December 4, 1868 to June 27, 1869, between the remnants of the Tokugawa shogunate army, consolidated into the armed forces of the rebel Ezo Republic, and the armies of the newly formed Imperial government (composed mainly of forces of the Chōshū and the Satsuma domains). It was the last stage of the Boshin War, and occurred around Hakodate in the northern Japanese island of Hokkaidō. In Japanese, it is also known as the Battle of the Goryokaku (五稜郭の戦い, Goryokaku no tatakai?)

According to the Japanese calendar, the Battle of Hakodate was fought from Meiji-1 year (gannen), 10-month, 21-day until Meiji-2 year, 5-month 18-day.

The Boshin War erupted in 1868 between troops favorable to the restoration of political authority to the Emperor and the government of the Tokugawa shogunate. The Meiji government defeated the forces of the Shogun at the Battle of Toba-Fushimi and subsequently occupied the Shogun's capital at Edo.

Enomoto Takeaki, vice-commander of the Shogunate Navy, refused to remit his fleet to the new government and departed Shinagawa on 1868-08-20, with four steam warships (Kaiyō, Kaiten, Banryū, Chiyodagata) and four steam transports (Kanrin Maru, Mikaho, Shinsoku, Chōgei) as well as 2,000 sailors, 36 members of the "Yugekitai" (guerilla corps) headed by Iba Hachiro, several officials of the former Bakufu government including the vice-commander in chief of the Shogunate Army Matsudaira Taro, Nakajima Saburozuke, and members of the French Military Mission to Japan, headed by Jules Brunet.

On August 21, the fleet encountered a typhoon off Choshi, in which Mikaho was lost and Kanrin Maru, heavily damaged, forced to rally the coast, where she was captured at Shimizu.

File:BakufuTroopsToEzo.jpg
Rebel troops of the former Bakufu, being transported to Hokkaidō.

Part of the fleet of Enomoto Takeaki off Shinagawa. From right to left: Kaiten, Kaiyō, Kanrin, Chōgei, Mikaho. The Banryō and Chiyodagata are absent. 1868 photograph.

The rest of the fleet reached Sendai harbor on August 26, one of the centers of the Northern Coalition (奥羽越列藩同盟) against the new government, composed of the fiefs of Sendai, Yonozawa, Aizu, Shōnai and Nagaoka.

Imperial troops continued to progress north, taking the castle of Wakamatsu, and making the position in Sendai untenable. On October 12, 1868, the fleet left Sendai, after having acquired two more ships (Oe and the Hou-Ou, previously borrowed by Sendai domain from the Shogunate), and about 1,000 more troops: former-Bakufu troops under Otori Keisuke, Shinsengumi troops under Hijikata Toshizo, Yugekitai under Katsutaro Hitomi, as well as several more French advisors (Fortant, Marlin, Bouffier, Garde), who had reached Sendai overland.

The rebels, numbering around 3,000 and traveling by ship with Enomoto Takeaki reached Hokkaidō in October 1868. They landed on Takanoki Bay, behind Hakodate on October 20. Hijikata Toshizo and Otori Keisuke each led a column in the direction of Hakodate. They eliminated local resistance by forces of Matsumae domain, which had declared its loyalty to the new Meiji government, and occupied the fortress of Goryokaku on October 26, which became the command center for the rebel army. 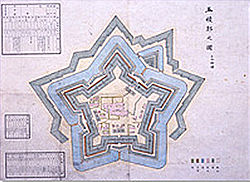 The fortress of Goryokaku, headquarters of the rebel army.

Various expeditions were organized to take full control of the southern peninsula of Hokkaidō. On November 5, Hijikata, commanding 800 troops and supported by the warships Kaiten and Banryo occupied the castle of Matsumae. On November 14, Hijikata and Matsudaira converged on the city of Esashi, with the added support of the flagship Kaiyo Maru, and the transport ship Shinsoku. Unfortunately, Kaiyō Maru was shipwrecked and lost in a tempest near Esashi, and Shinsoku also was lost as it came to its rescue, dealing a terrible blow to the rebel forces.

After eliminating all local resistance, on December 25, the rebels founded the Ezo Republic, with a government organization modeled after that of the United States, with Enomoto Takeaki, as President (総裁). While the governments of France and the United Kingdom conditionally recognized the new republic, the Meiji government in Tokyo did not.

A defense network was established around Hakodate in anticipation of the attack by the troops of the new Imperial government. The Ezo Republic troops were structured under a hybrid Franco-Japanese leadership, with Commander in chief Otori Keisuke seconded by Jules Brunet, and each of the four brigades commanded by a French officer (Fortant, Marlin, Cazeneuve, Bouffier), seconded by eight half-brigade Japanese commanders. Two ex-French Navy officers, Eugène Collache and Henri Nicol further joined the rebels, and Collache was put in charge of building fortified defenses along the volcanic mountains around Hakodate, while Nicol was in charge of re-organizing the Navy.

In the meantime, an Imperial fleet had been rapidly constituted around the ironclad warship Kōtetsu, which had been purchased by the Meiji government from the United States. Other Imperial ships were Kasuga, Hiryū, Teibo, Yoshun, Moshun, which had been supplied by the fiefs of Saga, Chōshū and Satsuma to the newly formed government in 1868. The fleet left Tokyo on March 9, 1869, and headed north. 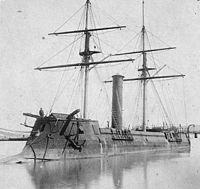 The Imperial navy reached the harbor of Miyako on March 20. Anticipating the arrival of the Imperial fleet, the rebels organized a daring plan to seize the powerful new warship Kōtetsu.

Three warships were dispatched for a surprise attack, in what is known as the Naval Battle of Miyako: the Kaiten, on which were riding the elite Shinsengumi as well as the ex-French Navy officer Henri Nicol, the warship Banryu, with the ex-French officer Clateau, and the warship Takao, with ex-French Navy officer Eugène Collache on board. To create surprise, the Kaiten entered Miyako harbor with an American flag. They raised the Ezo Republic flag seconds before boarding the Kōtetsu. The crew of Kōtetsu managed to repel the attack with a Gatling gun, with huge losses to the attackers. The two Ezo warships escaped back to Hokkaidō, but the Takao was pursued and self-wrecked.

The Imperial troops, numbering 7,000, finally landed on Hokkaidō on April 9, 1869. They progressively took over various defensive positions, until the final stand occurred around the fortress of Goryokaku and Benten Daiba around the city of Hakodate.

Japan's first major naval engagement between two modern navies, the Naval Battle of Hakodate Bay, occurred towards the end of the conflict, during the month of May 1869.[1]

Before the final surrender, in May 1869, the Ezo Republic French military advisors escaped to a French Navy warship stationed in Hakodate Bay, the Coëtlogon, from where they returned to Yokohama and thence to France.

After having lost close to half their numbers and most of their ships, the military of Ezo Republic surrendered to the Meiji government on May 17, 1869.

Hijikata Toshizo, leader of the Shinsengumi, fought against the Imperial troops and died in the battle of Hakodate.

The battle marked the end of the old feudal regime in Japan, and the end of armed resistance to the Meiji restoration. After a few years in prison, several of the leaders of the rebellion were rehabilitated, and continued with brilliant political careers in the new unified Japan: Enomoto Takeaki in particular took various ministry functions during the Meiji era.

The new Imperial government, finally secure, established numerous new institutions soon after the end of the conflict. The Imperial Japanese Navy in particular was formally established in July 1869, and incorporated many of the combatants and ships which had participated in the Battle of Hakodate.

The future admiral Togo Heihachiro, hero of the 1905 Battle of Tsushima, participated in the battle as a gunner on board the paddle steam warship Kasuga.

Later depictions of the battle

Although the Battle of Hakodate involved some of the most modern armament of the era (steam warships, and even an ironclad warship, barely invented 10 years earlier with the world's first seagoing ironclad, the French La Gloire), Gatling guns, Armstrong guns, modern uniforms and fighting methods, most of the later Japanese depictions of the battle during the few years after the Meiji Restoration offer an anachronistic representation of traditional samurai fighting with their swords, possibly in an attempt to romanticize the conflict, or to downplay the amount of modernization already achieved during the Bakumatsu period (1853-1868). 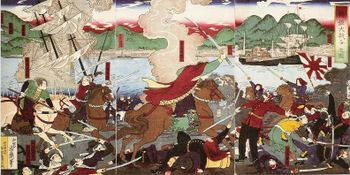 A Japanese rendition of the Battle of Hakodate (函館戦争の図), circa 1880. The cavalry charge, with a sinking sail ship in the background, is led by the leaders of the rebellion, labeled from left to right, Enomoto (Kinjiro) Takeaki, Otori Keisuke, Matsudaira Taro. The samurai in yellow garment is Hijikata Toshizo. French soldiers are shown behind the cavalry charge in white trousers. Imperial troops with modern uniforms are on the right (the "Red bear" (赤熊, Shaguma) wigs indicate soldiers from Tosa ("White bear" (白熊, Haguma) wigs for Chōshū, "Black bear" (黒熊, Koguma) wigs for Satsuma)), with a modern steam warship in the background.

Although the modernization of Japan is generally explained as starting with the Meiji period (1868), it actually started significantly earlier from around 1853 during the final years of the Tokugawa shogunate (the Bakumatsu period). The 1869 Battle of Hakodate shows two sophisticated adversaries in an essentially modern conflict, where steam power and guns play the key role, although some elements of traditional combat clearly remained. A great deal of Western scientific and technological knowledge had already been entering Japan since around 1720 through rangaku, the study of Western sciences, and since 1853, the Tokugawa shogunate had been extremely active at modernizing the country and opening it to foreign influence. In a sense, the Restoration movement, based on the Sonno Joi ideology was a reaction to this modernization and internationalization, although, in the end, the Meiji Emperor chose to follow a similar policy under the Fukoku Kyohei (Rich country, Strong army) principle. Some of his former supporters from Satsuma, such as Saigō Takamori would revolt against this situation, leading to the Satsuma Rebellion in 1877.

A group of French military advisors, members of the 1st French Military Mission to Japan and headed by Jules Brunet, fought side-by-side with troops of the former Tokugawa bakufu, whom they had trained during 1867–1868.

The Battle of Hakodate also reveals a period of Japanese history when France was strongly involved with Japanese affairs. Similarly, British and American interests and actions in Japan were quite significant, but less visible than with the French. This French involvement is part of the broader, and often disastrous, foreign activity of the French Empire under Napoleon III, and followed the Campaign of Mexico. The members of the French Mission who followed their Japanese allies to the North all resigned or deserted from the French Army before accompanying them. Although they were speedily rehabilitated upon their return to France, and some, such as Jules Brunet followed brilliant careers, their involvement was not premeditated or politically guided, but rather a matter of personal choice and conviction. Although defeated in this conflict, and again defeated in the Franco-Prussian War, France continued to play an important role in Japan's modernization: a Second Military Mission was invited in 1872, and the first true modern fleet of the Imperial Japanese Navy was built under the supervision of the French engineer Emile Bertin in the 1880s.