The Battle of Jonesborough (modern name Jonesboro) was fought August 31–September 1, 1864, during the Atlanta Campaign in the American Civil War. Two Union armies led by Maj. Gen. William T. Sherman maneuvered to draw the Army of Tennessee (led by John Bell Hood) away from their defenses at Atlanta, Georgia, where it could be destroyed.

Although Hood's army was not destroyed, the city of Atlanta was abandoned and then occupied by Union troops for the rest of the war. The fall of Atlanta also had far-reaching political as well as military effects on the course of the war.

In several previous raids during the campaign, Sherman had successfully (but temporarily) cut Confederate Gen. John Bell Hood's supply lines by using small detachments, but the Confederates had always quickly repaired the damage. Late in August 1864, Sherman believed that if he could completely sever Hood's supply lines—both the Macon & Western and the Atlanta & West Point Railroads—the Confederates would be forced to evacuate Atlanta.

Therefore, Sherman elected to move six out of his seven infantry corps against the Confederate supply lines. The Union army began pulling out of its positions on August 25 to hit the railroad between the towns of Rough and Ready and Jonesborough.

To counter this move, Lt. Gen. William J. Hardee and two Confederate corps were sent to halt and if possible rout the Union troops. However, Hood failed to realize most of Sherman's army was approaching there and in force, causing Hardee and his command to be highly outnumbered.

On August 31, Maj. Gen. Oliver O. Howard had two corps entrenched on the east side of the Flint River. John A. Logan's XV Corps dug in on high ground facing the Macon & Western Railroad. The XVI Corps, now led by Thomas E. G. Ransom formed a right angle connected to Logan's right.[3] Frank Blair and the XVII Corps were in reserve west of the Flint River.[4]

Hardee left Patrick Cleburne in command of his own corps while he directed the two-corps assault. Cleburne would move south and attack the Federal line held by Ransom, while Stephen D. Lee was to make the secondary attack against the Logan's line. Cleburne's lead division, led by Mark Lowrey moved west and just as it was turning north toward the Federal lines he was unexpectedly hit by H. Judson Kilpatrick's dismounted cavalry, concealed behind fence rails and armed with Spencer repeating rifles. Kilpatrick's fire was so effective that Lowrey broke off from his attack against Ransom's main line and directed his entire division against the Union cavalry. Lowrey succeeded in driving off the cavalry, but instead of returning to his original goal, he pressed the cavalry across the Flint River and was eventually stopped by Giles A. Smith's division from the XVII Corps west of the river.[5]

Lee mistook the firing between Lowry and Kilpatrick as the main assault and attacked well before Cleburne's troops had actually gone into action with Ransom.[3] Lee ordered a frontal assault that was vigorously led by J. Patton Anderson. General Logan, from the Federal lines, admired Anderson's bravery in the battle before he was shot down.[6] Lee's troops were repulsed with heavy casualties. After Lee's troops had been defeated, Hardee wished to renew the attack. However, Lee informed him his troops were in no condition to do so. Indeed, Lee had suffered a disproportionate 1,300 casualties to Cleburne's 400. Both were disproportionate to the Federal total of 179.[7]

Learning of this and fearing a direct attack on Atlanta, Hood withdrew Lee's corps from Hardee's force that night and into the city's defenses, a move that would have great consequences the following morning when fighting resumed. Hood later described the fighting on August 31 as a "disgraceful effort" because the number of Confederate dead was minimal compared to the forces engaged.[8] 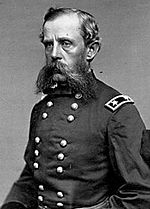 Ruins of Rolling Mill and cars destroyed by rebels on evacuation of Atlanta, Ga.

The next day, September 1, Sherman brought up the XIV Corps, now led by Jefferson C. Davis, for an assault on the Confederate lines north of Jonesborough. Much of the morning, however, was spent bringing up further Union reinforcements. Sherman was particularly concerned about bringing into line David S. Stanley's IV Corps, which was busy destroying the Macon & Western Railroad near Rough and Ready. Hardee moved his lone corps in a defensive line with the divisions of John C. Brown and Clerburne parallel to the Macon & Western Railroad. George Maney's division ran perpendicular to Cleburne's right, forming a salient centered around the railroad. map

By 4:00 p.m. Stanley's corps still had not yet arrived on the battlefield, and Sherman ordered Davis to make an attack on a Confederate salient held by Cleburne and Maney. The apex of the salient was held by Daniel Govan's brigade. Davis made an initial attack, led by a brigade of U.S. Regulars, which was easily repulsed. Next, he positioned all three of his divisions for an assault. Absalom Baird was in the center, with James D. Morgan on the left and William P. Carlin on the right.[9] John A. Logan's XV Corps also moved up on Davis's right. Baird personally led a bayonet charge, which earned him the Medal of Honor. The Confederates held on tenaciously, but after hand-to-hand combat Baird's men broke through, capturing Govan and 600 of his men.[10] Davis's men poured through the breach while Stanley's corps finally arrived on Davis's left. The remaining Confederates managed to retreat in good order to Lovejoy's Station.

On the night of September 1, Hood evacuated Atlanta and ordered that the 81 rail cars filled with ammunition and other military supplies be destroyed. The resulting fire and explosions were heard for miles. Union troops under the command of Gen. Henry W. Slocum occupied Atlanta on September 2.[11]

The Battle of Jonesborough was the final battle of the Atlanta Campaign, and it caused the besieged city of Atlanta to fall into Union hands. On September 4, 1864, General Sherman issued Special Field Order # 64. General Sherman announced to his troops that “The army having accomplished its undertaking in the complete reduction and occupation of Atlanta will occupy the place and the country near it until a new campaign is planned in concert with the other grand armies of the United States.”[12] The capture of Atlanta greatly aided the re-election of Abraham Lincoln in November, and hastened the end of the war. Hood led his defeated army away from Atlanta and to the west, opening the way for Sherman's March to the Sea and resulting in the virtual destruction of his Army of Tennessee during the Franklin-Nashville Campaign. In 1872 many of the fallen soldiers were relocated and reburied in the Patrick R. Cleburne Confederate Cemetery.[13] 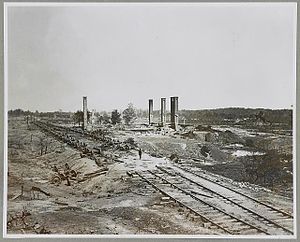 Ruins of Rolling Mill and cars destroyed by rebels on evacuation of Atlanta, Ga.

The famous fire scenes in the 1939 American film Gone with the Wind depict the conflagration in Atlanta caused by the spreading of fires started when Hood ordered the destruction of military supplies and installations as he evacuated the city.