Signature of J. P. Donnelley. Leader of the posse involved in the Battle of Kelley Creek. The signature is taken from a registered mail signing book from Carson City, NV - 1812 - 1813.

The Battle of Kelley Creek, also known as the Last Massacre, is often considered to be one of the last known massacres carried out between Native Americans and forces of the United States, and was a closing event to occur near the end of the American Indian warfare era. In January 1911 a small group of Bannocks and Shoshones killed four investigative agents in a ranch after they had been pursued for abducting cattle. A posse of policemen and citizens were sent to track the natives, who were found encamped near Winnemucca, Nevada, in a region known as Kelley Creek. A largely one-sided battle ensued on February 25 that ended with the direct deaths of nine people, eight Daggetts and one mortally wounded American. At the time the affair was briefly characterized as a Native American revolt, though it is now mostly regarded as a family's attempted escape from law enforcement.[1]

Mike Daggett, or Shoshone Mike, was the chief of the small band and in the spring of 1910, he led his group of eleven off the Fort Hall Reservation at Rock Creek, Idaho. All but two men of the group were members of Mike's family, which included three women and four or five children. They first headed south into northern Nevada and then wandered west to Oroville, California, before heading back into Nevada to spend the winter at Little High Rock Canyon in northern Washoe County. In January 1911 the Daggett party was running low on food, so they abducted and butchered some cattle belonging to a local rancher. A sheepherder named Bert Indiano witnessed the event and alerted the people of Surprise Valley, California, who sent a posse of three men to investigate the incident and protect the ranch. The three men, Harry Cambron, Peter Errammouspe and John Laxague, were to go to the ranch and join up with the sheepherder so the four could investigate the scene. Upon arrival the posse of three instead ran into Mike Daggett and two of his sons, who were reported to be waiting for them.[2][3]

The Daggetts had apparently realized the agents would be coming to find them, so when the posse entered the canyon on January 19, the natives opened fire with rifles and pistols, killing all four of them. The bodies were allegedly picked clean and found with numerous gunwounds on a creekbed, weeks later on February 8, by a search party from Eagleville, California. The scene also showed signs of looting. When word of the killings reached the surrounding settlements many who felt at risk temporarily evacuated the area, and the men who stayed behind remained armed and alert at all times. Initially it was thought that a gang of outlaws from Oregon or a band of Modocs were responsible. The Nevada and California State Police organized a posse under the command of Captain J.P. Donnelly to find the suspects, who had decided to flee towards the Duck Valley Indian Reservation. Other posses were also organized (though only Donnelly's would ever make contact with the Daggetts), and a large cash bounty was promised to anyone who managed to arrest or kill the fugitives.[4][5] 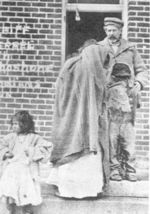 Donnelly's posse included at least five policemen, a few armed civilians, and the "county coroner and physician". After stopping in Little High Rock Canyon on February 13, they continued despite extreme cold and winter weather. Over 200 miles further and on February 25, the posse found Daggett and his family hiding in an area known as Kelley Creek, northeast of Winnemucca. It is unclear which side shot first, but a battle erupted that lasted for around three hours.[6] The women reportedly fought equally alongside the men. Father and chief Mike Daggett was one of the first casualties during the battle, but his death only made the members of his family desperately fight back harder; even as they were inevitably forced back. At some point during the conflict the remaining Daggetts had run out of ammunition for their guns were forced to resort to bows, spears and tomahawks. By the end of the battle only four of the original twelve Dagget family members were still alive: a sixteen-year-old girl and three young children, who were taken into police custody. One American, Ed Hogle of Eagleville, was mortally wounded during the fight. Two other young Daggett children were also reported to have been shot inadvertently.[7][8]

After the battle was over, the posse found evidence linking the killings in Little High Rock Canyon to the natives. Other than Mike's war bonnet the posse found guns and a watch that had belonged to Harry Cambron, identified by brother Ben Cambron. The bodies of the natives were taken by wagon to Gasconade, Nevada, and buried in a mass grave made from the crater of a dynamite explosion. A tall pole was placed at the site as a grave marker. The remains of Ed Hogle were returned to Eagleville, where he was buried. Sheriff Charles Ferrell, who was in command of the investigation - but not present at the battle, arrived back in Reno on March 2 with the four surviving captives, and they claimed that while the man had indeed been Shoshone Mike, their mother and the others were Bannocks. The four were informally adopted by Reno's civilian population until in May 1911 they were enrolled in the Stewart Indian School near Carson City, Nevada. By 1913, three of the children had died of natural causes, only one of the survivors {Dagget's granddaughter} was left alive {she died in 1993}. The reward offered to anyone who could catch or kill the Daggett party was initially denied to the posse by Governor Tasker Oddie, due to the fact that there were state policemen involved, but the case was later settled in favor of the posse by the Supreme Court.[9][10]