From Infogalactic: the planetary knowledge core
Jump to: navigation, search
This article is about the battle that occurred in 1673 C.E.. It is not to be confused with the Battle of Khotyn (1621). 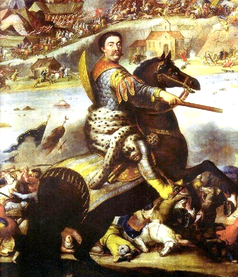 Jan Sobieski in battle of Khotyn 1673

The Battle of Khotyn or Battle of Chocim or Hotin War[1] was a battle held on the 11 November 1673, where Polish-Lithuanian Commonwealth forces under hetman Jan Sobieski defeated Ottoman Empire forces under Hussain Pasha. It reversed the fortunes of the previous year, when Commonwealth weakness led to the signing of the Peace of Buczacz, and allowed Jan Sobieski to win the upcoming royal election and become the king of Poland.

Polish-Lithuanian forces and Wallachian regiments were 30 thousand strong. The Turks commanded 35 thousand troops and 120 guns. In this battle rockets of Kazimierz Siemienowicz were deployed successfully. The victory allowed the Poles to revoke the unfavourable Peace of Buczacz and set the stage for the role Sobieski was to play in the Battle of Vienna in 1683.

The Turkish forces withdrew from Poland after having their supplies captured and most of their artillery. Sobieski and the nobles returned to Warsaw for elections following the death of Michael Wisniowiecki, King of Poland, the day before the battle.