The Battle of Kunersdorf, fought in the Seven Years' War, was Frederick the Great's most devastating defeat. On August 12, 1759, near Kunersdorf (Kunowice), east of Frankfurt (Oder), 50,900 Prussians were defeated by a combined allied army 65,000 strong consisting of 41,000 Russians and 24,000 Austrians under Pyotr Saltykov and Ernst Gideon von Laudon. Only 3,000 soldiers from the original 50,900 comprising the Prussian army returned to Berlin after the battle, though many more had only scattered and were ultimately able to join the army afterward.

Russian and Austrian forces had united in the Prussian heartland of Brandenburg after the Russian victory at the Battle of Kay on 23 July. King Frederick rushed from Saxony, took over the remaining contingent of Lieutenant General Carl Heinrich von Wedel at Müllrose and moved across the Oder River urging for a battle of decision. It started with a Prussian attack on the flank of the Russian positions. The Prussians got the better of this engagement. This attack was successful and if Frederick had stopped there (as his brother Henry demanded), Kunersdorf would have been a Prussian victory. Frederick's generals asked him to stop as the Prussian army was tiring in the hot weather. However, Frederick wanted to press his initial success and decided to continue the fight. While the Prussian oblique order attack faded, the Austrian cavalry (so far kept in reserve) entered the battle. However, King Frederick II was able to regroup and kept pressure on the allies.

The battle culminated in the early evening hours with a massive Prussian cavalry charge under Friedrich Wilhelm von Seydlitz upon the Russian center and artillery positions. The Prussian cavalry suffered heavy losses and retreated in complete disorder. Seydlitz himself was gravely wounded. The allied cavalry, which included heavy Russian horse, Croats and Kalmyks, counterattacked and scattered what was left of the Prussian Army. The Prussians lost almost 20,000 men and almost all their artillery. Frederick, who was in the very middle of the action but unhurt, barely escaped capture. Two of his horses were shot out from under him, his uniform was torn, and a snuff-box in his pocket was pulverized. [2] He stood alone on a small hill with his rapier sticking in the ground before him—determined to either hold the line against the whole enemy army alone or die. Cavalry Captain Ernst Sylvius von Prittwitz came to the king's rescue with his 200 strong squadron and convinced Frederick to leave. Major Ewald Christian von Kleist was severely injured and succumbed to his wounds twelve days later. 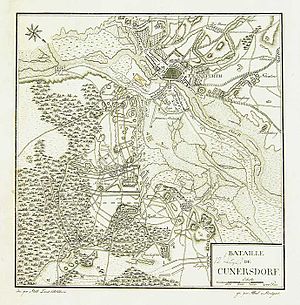 The Russians and Austrians lost fewer than 15,000 men (approx. 5,000 killed). The Prussians suffered a severe defeat losing 172 cannons, 6,000 killed, 13,000 wounded and 26,000 men that were scattered. Four days after the battle however, most of the 26,000 scattered men turned up at the headquarters on the Oder River and Frederick's army recovered to a strength of 32,000 men and 50 cannon. The crushing defeat remained without consequences as the victors omitted the opportunity to march against Berlin and retired to Saxony instead. Frederick wrote of the "Miracle of the House of Brandenburg" in a letter to his brother Henry on 1 September. Later on, the Russian army would no longer fight any major battle, allowing the Prussians to focus on the Austrians.

The Battle of Kunersdorf was the first battle where regular units of horse artillery were deployed. It was essentially a hybrid of cavalry and artillery where the entire crew rode horses into battle. The unit had been formed only recently and fought on the Prussian side. Despite being wiped out during the battle, the batteries were reorganized the same year and participated in the Battle of Maxen.[3] 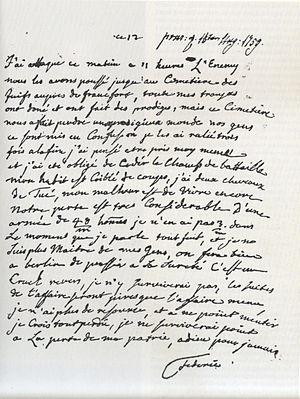 The king wrote to Berlin on the evening after the battle:

This morning at 11 o'clock I have attacked the enemy. ... All my troops have worked wonders, but at a cost of innumerable losses. Our men got into confusion. I assembled them three times. In the end I was in danger of getting captured and had to retreat. My coat is perforated by bullets, two horses of mine have been shot dead. My misfortune is that I am still living ... Our defeat is very considerable: To me remains 3,000 men from an army of 48,000 men. At the moment in which I report all this, everyone is on the run; I am no more master of my troops. Thinking of the safety of anybody in Berlin is a good activity ... It is a cruel failure that I will not survive. The consequences of the battle will be worse than the battle itself. I do not have any more resources, and - frankly confessed - I believe that everything is lost. I will not survive the doom of my fatherland. Farewell forever!