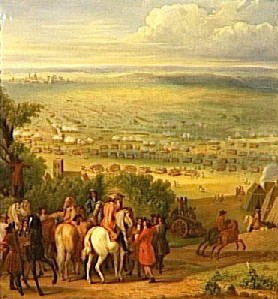 The Battle of Lens. Contemporary illustration, oil on canvas.

The Battle of Lens (20 August 1648) was a French victory under Louis II de Bourbon, Prince de Condé against the Spanish army under Archduke Leopold in the Thirty Years' War (1618–1648). It was the last major battle of the war. Lens is a fortified city in the historic region of Flanders, today a major city in the Pas-de-Calais region of northern France. The city had been captured by the French in 1647. The nobility rebelled against the leadership of Cardinal Mazarin, known as the Fronde, leading the Spanish to perceive an opportunity to retake Lens and possibly gain ground.

The Prince de Condé rushed from Catalonia to Flanders, and an army was cobbled together from Champagne, Lorraine, and Paris. The French army consisted of 16,000 men (more than half were cavalry) and 18 guns. The Spanish army was larger, comprising 18,000 men (also more than half cavalry) and 38 guns. The armies drew up, but the Spanish were on high ground. Condé decided not to attack. As the French retreated, the Spanish cavalry skirmished with the French rear guard, and the engagement escalated until the armies were fully engaged. The Spanish infantry broke the French Guards regiment, but the superior French cavalry were able to defeat their counterparts and take over the center of the battle.

The year 1648 saw two political developments that were both directly tied to the Battle of Lens, but with opposite results.[2] First, it caused a hardening of the Monarchy's attitude toward the parlements, leading to an initial confrontation in Paris and a protracted struggle that followed.[2] However, the French victory also ended the Thirty Years' War, though not the conflict between France and Spain. The armies of Turenne, Wrangel and Königsmark were threatening Vienna and Prague; Emperor Ferdinand's ally, Maximilian of Bavaria, fervently wanted peace; and Philip IV had lost his main army. Ferdinand had no choice other than to make peace. He approved the propositions for peace from France and Sweden in Munster and Osnabruck. (Since 1641, talks had taken place between France and the Empire in Münster, and between Sweden and the Empire in Osnabrück.) The definitive peace treaty, called the Peace of Westphalia, was signed on 24 October 1648, ending the Thirty Years' War. The war between France and Spain, would not end until the Treaty of the Pyrenees on 7 November 1659).[3]

In the end, the French victory was made irrelevant by subsequent events elsewhere, during the failure to secure Anne of Austria's regency of France while Louis XIV was too young to rule. A civil war in France broke out shortly afterwards, giving Spain the chance of recovery.[4] The Te Deum at Notre-Dame de Paris in honour of the battle ended in a riot, which caused a serious confrontation that led to the revolt. In January 1649, Louis XIV and his ministers had to flee Paris.[5]