From Infogalactic: the planetary knowledge core
Jump to: navigation, search
For the 1762 battle, see Battle of Lutterberg (1762). 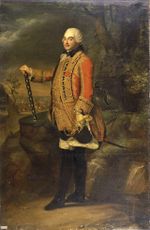 The Prince of Soubise, with his earned Marshal’s baton

The Battle of Lutterberg took place on 10 October 1758 during the Seven Years' War between a French force of 42,000 commanded by Charles, Prince of Soubise and a much smaller Anglo-German force commanded by General Christoph Ludwig von Oberg.

The two armies clashed near the town of Lutterberg, Lower Saxony. The 14,000 mostly Prussian Allied troops, were overwhelmed by several charges of French cavalry and were forced to withdraw.[1] Despite having won a decisive victory, Soubise was slow to pursue the retreating enemy - causing his superiors in Paris to replace him with the Marquis de Contades.[2]

Soubise earned a Marshal’s baton for this victory. François de Chevert was decorated with the Grand Croix for his contributions in the battle.