The Battle of Mühlberg was a large battle at Mühlberg in the Electorate of Saxony in 1547, during the Protestant Reformation. The Catholic princes of the Holy Roman Empire led by the Holy Roman Emperor Charles V decisively defeated[1][2] the Lutheran Schmalkaldic League of Protestant princes under the command of Elector John Frederick I of Saxony and Landgrave Philip I of Hesse.[1] 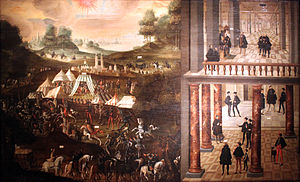 Battle of Mühlberg 1547 and imprisonment of elector Johann Friedrich of Saxony (painting from 1630, Deutsches Historisches Museum) 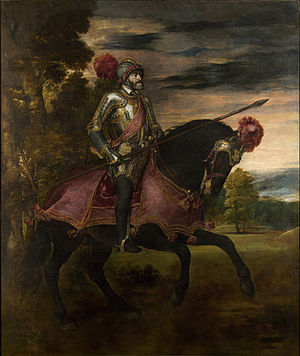 The Imperial-Spanish forces were commanded by Emperor Charles V and his commander-in-chief in Germany, Don Fernando Álvarez de Toledo, Duke of Alba.[1][2] The Schmalkaldic League's commanders could not agree on any military actions on the battlefield, thereby allowing Charles' forces to run through the league's defences.

The Emperor was 47 years old at the time, and suffering from gout. He was therefore carried to the battle in a litter, rather than on the great warhorse in modern armour depicted by his court painter, Titian.

The Imperial-Spanish army under the Duke of Alba arrived on the Elbe river on 23 April and the battle began early in the morning. Charles' Tercios, who were mostly Spanish professional soldiers of high quality[1] and mercenaries, took advantage of an early morning mist to outflank the Schmalkaldic forces.[1] The Protestant troops were taken completely by surprise and, after a token resistance, fled in panic.

The Protestant army was destroyed (over 7,000 dead or wounded and 1,000 prisoners) and various Protestant leaders (including Elector John Frederick I of Saxony and Landgrave Philip I of Hesse) were captured by the Hungarian cavalry.[1]

The victory of the Imperial-Spanish forces led to the dissolution of the Schmalkaldic League.[2] John Frederick was captured (by the Hungarian hussars during the battle) and arrested. In the course of the Capitulation of Wittenberg[1] a few weeks later he had to resign the electoral dignity and the major part of his lands in favour of his cousin Maurice.[1][2]

This battle effectively won the war for Charles and the Schmalkaldic War was over; only two cities continued to resist but the Protestant problem remained. Many of the princes and key reformers, such as Martin Bucer, fled to England, where they directly influenced the English Reformation.[citation needed] 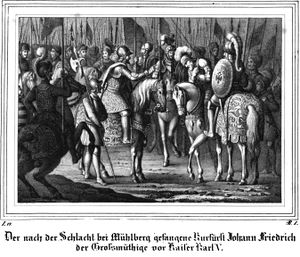 The Battle of Mühlberg by Eduard Sommer