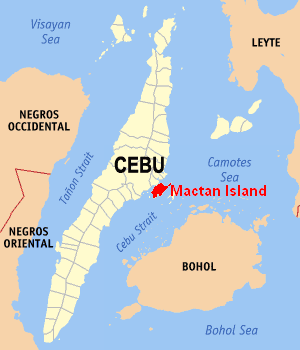 The location of Mactan Island in Cebu

The Battle of Mactan (Cebuano: Gubat sa Mactan; Tagalog: Labanan sa Mactan; Spanish: Batalla de Mactán) was fought in the Philippines on 27 April 1521, prior to Spanish colonization. The warriors of Lapu-Lapu, a native chieftain of Mactan Island, overpowered and defeated a small Spanish force fighting for Rajah Humabon of Cebu, under the command of Ferdinand Magellan, who was killed in the battle.

On 16 March 1521 (Spanish calendar), Magellan sighted the mountains of what is now Samar while on a mission to find a westward route to the Moluccas Islands for Spain. This event marked the arrival of the first Europeans in the Archipelago. The following day, Magellan ordered his men to anchor their ships on the shores of Homonhon Island.[1]

There, Magellan befriended Rajah Kulambu and Rajah Siagu the chieftain of Limasawa, who guided him to Cebu.[1] He, and his queen were baptized into the Catholic faith, taking the Christian names Carlos, in honor of King Charles of Spain, and Juana, in honor of King Charles' mother. To commemorate this event, Magellan gave Juana the Santo Niño, an image of the infant Jesus, as a symbol of their new alliance.[1]

As a result of Magellan's influence with Rajah Humabon, an order had been issued to the nearby chiefs that each of them were to provide food supplies for the ships, and convert to Christianity.

Most chiefs obeyed the order. However, Datu Lapu-Lapu, one of the two chiefs within the island of Mactan, was the only chieftain to show his opposition. Lapu-Lapu refused to accept the authority of Rajah Humabon in these matters. This opposition proved to be influential when Antonio Pigafetta,[2] Magellan's voyage chronicler,[3] writes,

"On Friday, April twenty-six, Zula, the second chief of the island of Mactan, sent one of his sons to present two goats to the captain-general, and to say that he would send him all that he had promised, but that he had not been able to send it to him because of the other chief Lapu-Lapu, who refused to obey the king of Spain."[4]

Rajah Humabon and Datu Zula suggested that Magellan go to the island of Mactan and force his subject chieftain Datu Lapu-Lapu to comply with his orders.[1] Magellan saw an opportunity to strengthen the existing friendship ties with the ruler of the Visayan region and agreed to help him subdue the resistant Lapu-Lapu.

According to the documents of Italian historian Antonio Pigafetta, Magellan tried to convince Lapu-Lapu to comply with Rajah Humabon's orders the night before the battle,

At midnight, sixty of us set out armed with corselets and helmets, together with the Christian king, the prince, some of the chief men, and twenty or thirty balanguais. [a type of Filipino boat] We reached Mactan three hours before dawn. The captain did not wish to fight then, but sent a message to the natives to the effect that if they would obey the king of Spain, recognize the Christian king as their sovereign, and pay us our tribute, he would be their friend; but that if they wished otherwise, they should wait to see how our lances wounded. They replied that if we had lances they had lances of bamboo and stakes hardened with fire. They said that in order to induce us to go in search of them; for they had dug certain pit holes filled with spikes between the houses in order that we might fall into them.[4]

Pigafetta writes how Magellan deployed forty-nine armored men with swords, axes, shields, crossbows, and guns, and sailed for Mactan in the morning of 28 April. A number of native warriors converted to Christianity also came to their aid.[1] Filipino historians note that because of the rocky outcroppings, and coral near the beach, the Spanish soldiers could not land on Mactan. Forced to anchor their ships far from shore, Magellan could not bring his ships' cannons to bear on Lapu-Lapu's warriors, who numbered more than 1,500.

"When morning came, forty-nine of us leaped into the water up to our thighs, and walked through water for more than two cross-bow flights before we could reach the shore. The boats could not approach nearer because of certain rocks in the water. The other men remained behind to guard the boats. When we reached land, [the natives] had formed in three divisions to the number of more than one thousand five hundred persons. When they saw us, they charged down upon us with ear-shattering loud cries... The musketeers and crossbow-men shot from a distance for about a half-hour, but uselessly..."[5]

The musketeers were too far back to aim, and could only shoot halfway from the distance of the natives.[citation needed] 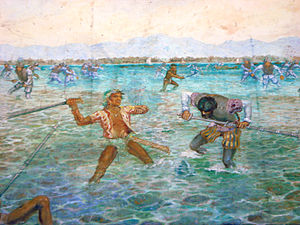 A painting of the encounter at the Mactan Shrine.

Magellan and his men then tried to scare them off by burning some houses in Bulaia. But the natives surprised them by raining a barrage of arrows, but the shields and helmets of the Spaniards left no permanent damage.

"Seeing that, Magellan sent some men to burn their houses in order to terrify them. When they saw their houses burning, they were roused to greater fury. Some of our men were killed near the houses, while we burned twenty or thirty houses. So many of them rained down upon us that the captain was shot through the right leg with a poisoned arrow. On that account, he ordered us to a frontal assault. But the men took to flight, except ten to fifteen of us who remained with the captain. The natives shot only at our legs, for the latter were bare; and so many were the spears and stones that they hurled at us, that we could offer no resistance. The mortars in the boats could not aid us as they were too far away."[5]

When the natives charged to their position, Magellan ordered his men to fire at them using their rifles and crossbows, but for a short period of time. Out of ammunition, they switched to their swords and axes and fought with the captain. At least 10 Spaniards were killed and the others withdrew.

Many of the warriors specifically attacked Magellan. In the struggle, he was wounded in the arm with a spear and in the leg by a kampilan. Those who stood beside him were easily overpowered and killed, while the others who tried to help him were hacked by spears and swords. With this advantage, Lapu-Lapu's troops finally overwhelmed and killed Magellan. Pigafetta and a few others managed to escape.

"Recognizing the captain, so many turned upon him that they knocked his helmet off his head twice... an Indian hurled a bamboo spear into the captain's face, but the latter immediately killed him with his lance, which he left in the Indian's body. Then, trying to lay hand on sword, he could draw it out but halfway, because he had been wounded in the arm with a bamboo spear. When the natives saw that, they all rushed themselves upon him. One of them wounded him on the left leg with a large cutlass, which resembles a scimitar, only being larger. That caused the captain to fall face downward, when immediately they rushed upon him with iron and bamboo spears and with their cutlasses, until they killed our mirror, our light, our comfort, and our true guide. When they wounded him, he turned back many times to see whether we were all in the boats. Thereupon, beholding him dead, we, wounded, retreated, as best we could, to the boats, which were already pulling off..."[5]

According to Pigafetta, several of Magellan's men were killed in battle, and a number of natives converted to Christianity who had come to their aid were immediately killed by the warriors.[4]

Magellan's allies, Humabon and Zula, were said not to have taken part in the battle due to Magellan's bidding, and they watched from a distance.

When the body of Magellan was recovered by the warriors, Humabon ordered him to return the bodies of Magellan and some of his crew who were killed, and they would be given as much merchandise as they wished. Lapu-Lapu refused.[citation needed]

Some of the soldiers who survived the battle and returned to Cebu were poisoned while attending a feast given by Humabon. Magellan was succeeded by Juan Sebastián Elcano as commander of the expedition, who ordered the immediate departure after Humabon's betrayal. Elcano and his fleet sailed west and returned to Spain in 1522, completing the first circumnavigation of the world. 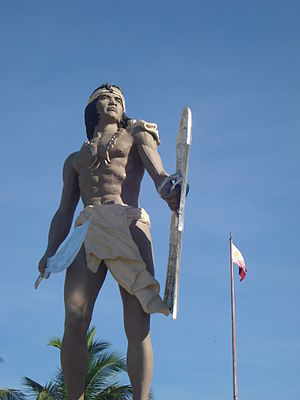 A depiction of Lapu Lapu at the Lapu Lapu shrine. 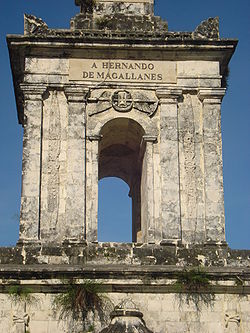 The memorial to Magellan built by the Spanish.

Today, Lapu-Lapu is retroactively honored as the first "Philippine national hero" to resist foreign rule, even though the territory of the "Philippine Islands" did not exist at the time, or was even named or imagined that way. It is actually a historical inaccuracy to consider the Battle of Mactan a "fight to resist foreign rule", as Magellan's forces were fighting to defend the interests of Rajah Humabon, the local chieftain of Cebu. The Battle of Mactan was in fact one of many tribal wars common in the archipelago prior to the arrival of the Spanish, with the added component that a European force fought for one of the sides, and lost.

Lapu-lapu is remembered by a number of commemorations: statues on the island of Mactan and the Cebu Provincial Capitol, a city bearing his name, and a local variety of red grouper fish. Kapampangan actor-turned-politician Lito Lapid starred in a film called Lapu-Lapu, and novelty singer Yoyoy Villame wrote a folk song entitled "Magellan" that tells a humorously distorted story of the Battle of Mactan.[6]

There is a spot in Mactan Island called the Mactan shrine where the battle is reenacted during its anniversary. In the same shrine, next to the Lapu-Lapu statue, there is a obelisk erected in Magellan's honor by the Spanish colonial authorities and defaced shortly after the US military occupation of the Philippines.

Magellan is also honored for bringing Christianity to the Philippines in general and the Santo Niño (Child Jesus) to Cebu in particular. The Magellan's Cross and the aforementioned Magellan's shrine were erected in Cebu City and Mactan Island. Many landmarks and infrastructures all over the Philippines bear Magellan's name, mostly using its Spanish spelling (Magallanes), which is also a widely used Filipino surname.

The inhabitants of the Sulu archipelago believe that Lapu-Lapu was a Muslim of the Tausūg people.[7]

According to native legend, Lapu-Lapu never died but turned into stone, and has since then been guarding the seas of Mactan. Fishermen in the island city would throw coins at a stone shaped like a man as a way of asking for permission to fish in the chieftain’s territory.[8]

Another myth passed on by the natives concerns the statue of Lapu-Lapu erected on a pedestal at the center of the town plaza. The statue faced the old city hall building, where the mayors used to hold office; it held a crossbow in the stance of appearing shoot an enemy. Some superstitious people of the city proposed to change this crossbow with a sword, after a succession of three mayors died due to a heart attack.[8]

Another legend suggests that after the battle, Lapu-Lapu left Mactan and lived on a mountain.[citation needed]