From Infogalactic: the planetary knowledge core
Jump to: navigation, search
"Battle of Meloria" redirects here. For the earlier battle fought at this location, see Battle of Meloria (1241).

In the 13th century, the Republic of Genoa conquered numerous settlements in Crimea, where the Genoese colony of Caffa was established. The alliance with the restored Byzantine Empire increased the wealth and power of Genoa and simultaneously decreased Venetian and Pisan commerce. The Byzantine Empire had granted most of free trading rights to Genoa. In 1282, Pisa tried to gain control of the commerce and administration of Corsica, when Sinucello, the judge of Cinarca, revolted against Genoa and asked for Pisan support.[11][12]

Bas-relief on the Tower of Pisa depicting Porto Pisano

In August 1282, part of the Genoese fleet blockaded Pisan commerce near the River Arno.[12] During 1283, both Genoa and Pisa made war preparations. Pisa gathered soldiers from Tuscany and appointed captains from its noble families. Genoa built 120 galleys; sixty of these belonged to the Republic and the remainder were rented to individuals. This fleet required at least 15,000 to 17,000 rowers and seamen.[12] 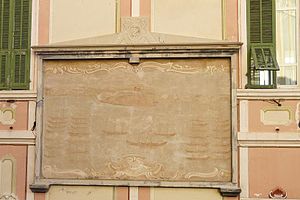 When the Genoese appeared off Meloria, the Pisans were lying in the Arno at the mouth of which lay Porto Pisano, the port of the city. The Pisan fleet represented the whole power of the city, and carried members of every family of mark and most of the officers of state. The Genoese, desiring to draw their enemy out to battle and to make the action decisive, arranged their fleet in two lines abreast. According to Agostino Giustiniani, the first was composed of fifty-eight galleys, and eight panfili—a class of light galley of eastern origin named after the province of Pamphylia. Oberto Doria, the Genoese admiral, was stationed in the centre and in advance of his line. To the right were the galleys of the Spinola family, among those of four of the eight companies into which Genoa was divided: Castello, Piazzalunga, Macagnana and San Lorenzo. To the left were the galleys of the Doria family and the companies Porta, Soziglia, Porta Nuova and Il Borgo. The second line of twenty galleys under the command of Benedetto Zaccaria was placed so far behind the first that the Pisans could not see whether it was made up of war-vessels or of small craft meant to act as tenders to the others. It was near enough to strike in and decide the battle when the action had begun.[13]

The Pisans, commanded by the Podestà Morosini and his lieutenants Ugolino della Gherardesca and Andreotto Saraceno, came out in a single body. It is said[by whom?] that while the Archbishop was blessing the fleet, the silver cross of his archiepiscopal staff fell off, but that the omen was disregarded by the irreverence of the Pisans, who declared that if they had the wind they could do without divine help. The Pisan fleet advanced in line abreast to meet the first line of the Genoese, fighting according to the medieval custom of ramming and boarding. The victory was decided for Genoa by the squadron of Zaccaria, which fell on the flank of the Pisans. Their fleet was nearly annihilated, the Podestà was captured and Ugolino fled with a few vessels.[13]

Pisa was also attacked by Florence and Lucca, and it could never recover from the disaster. Two years later, Genoa took Porto Pisano, the city's access to the sea, and filled up the harbour. Pisa lost its role as a major Mediterranean naval power and a regional power of Tuscany, being overshadowed and finally conquered in 1406 by Florence. Count Ugolino was afterwards starved to death with several of his sons and grandsons, an event recounted in the 32nd canto of Dante's Inferno.[13] One famous captive of the battle was Rustichello da Pisa, who co-wrote Marco Polo's account of his travels, Il Milione.