The Battle of Minden—or Tho(r)nhausen—was a decisive engagement during the Seven Years' War, fought on 1 August 1759. An Anglo-German army under the overall command of Field Marshal Ferdinand of Brunswick defeated a French army commanded by Marshal of France, Marquis de Contades. Two years prior, the French had launched a successful invasion of Hanover and attempted to impose an unpopular treaty of peace upon the allied nations of Britain, Hanover and Prussia. After a Prussian victory at Rossbach, and under pressure from Frederick the Great and William Pitt, King George II disavowed the treaty. In 1758, the Allies launched a counter-offensive against the French forces and drove them back across the Rhine.

After failing to defeat the French before reinforcements swelled their retreating army, the French launched a fresh offensive, capturing the fortress of Minden on 10 July. Believing Ferdinand's forces to be over-extended, Contades abandoned his strong positions around the Weser and advanced to meet the Allied forces in battle. The decisive action of the battle came when six regiments of British and two of Hanoverian infantry, in line formation, repelled repeated French cavalry attacks; contrary to all fears that the regiments would be broken. The Allied line advanced in the wake of the failed cavalry attack, sending the French army reeling from the field, ending all French designs upon Hanover for the remainder of the year.

In Britain, the victory was considered to constitute the Annus Mirabilis of 1759.

The western German-speaking states of Europe had been a major theatre of the Seven Years' War since 1757, when the French had launched an invasion of Hanover. This culminated in a decisive victory for the French at the Battle of Hastenbeck and the attempted imposition of the Convention of Klosterzeven upon the defeated allies: Hanover, Prussia and Britain.[3] Prussia and Britain refused to ratify the convention and, in 1758, a counter-offensive commanded by Ferdinand saw French forces first driven back across the Rhine, and then beaten at the Battle of Krefeld. The Prussian port of Emden was also recaptured, securing supply from Britain. In fact, the British government, which had previously been opposed to any direct involvement on the continent, took the opportunity of the 1758–59 winter break in fighting to send nine thousand British troops to reinforce Ferdinand.[4] The French crown also sent a reinforcing army, under Contades, hoping this would help to secure a decisive victory, swiftly concluding the costly war, and forcing the Allies to accept the peace terms France was seeking.

In an attempt to defeat the French before their reinforcements arrived, Ferdinand decided to launch a fresh counter-offensive, and quit his winter quarters early. In April, however, Victor-François, Duke de Broglie and the French withstood Ferdinand's attack at the Battle of Bergen, and de Broglie was promoted to Marshal of France. Ferdinand was forced to retreat northwards in the face of the now reinforced French army. Contades, senior of the two French marshals, resumed the advance, occupying a number of towns and cities including the strategic fortress at Minden, which fell to the French on 10 July.[5] Ferdinand was criticised for his failure to check the French offensive. His celebrated brother-in-law, Frederick the Great, is reported as having suggested that, since his loss at Bergen, Ferdinand had come to believe the French to be invincible.[6] Irrespective of any presumed crisis of confidence, however, Ferdinand did ultimately decide to confront the French, near Minden.

Contades had taken up a strong defensive position along the Weser around Minden, where he had paused to regroup before he continued his advance. He initially resisted the opportunity to abandon this strong position to attack Ferdinand. Ferdinand instead formulated a plan that involved splitting his force into several groups to threaten Contades' lines of supply. Perceiving Ferdinand's forces to be over-extended, Contades thought he saw a chance for the desired decisive victory. He ordered his men to abandon their defensive encampments and advance into positions on the plain west of Minden during the night of 31 July and early morning of 1 August.[7] 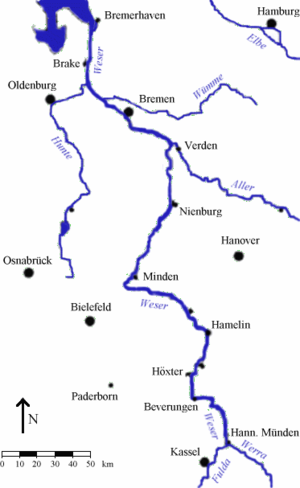 In 1759, the fortified city of Minden, now the Innenstadt (inner city) of modern Minden, was situated at the confluence of the Weser, which flows from south to north, and the Bastau, a marshy tributary rivulette. The Bastau drains into the Weser from west to east, roughly parallel with, and south of, the western arm of modern Germany's Midland Canal, where it crosses the Weser at Minden, north of the Innenstadt via the second largest water bridge in Europe). The Battle of Minden took place on the plain immediately in front of the city and its fortifications, to its northwest, with the Weser and Bastau lying behind the city to its east and south respectively.

On the 31st, the French troops under Contades' direct command had their positions west of the Weser and south of the Bastau, crossing to the north over five pontoons during the night and early morning of the 1st. The French under the junior marshal, de Broglie, were stationed astride the Weser. Some were occupying Minden on the 31st, while the remainder, stationed east of the Weser, crossed over to join them during the night.

In an exception to the norm for the era, Contades placed his artillery in the centre protected only by the cavalry, with his infantry on either flank. The battle began on the French right flank, where Marshal de Broglie, who commanded the reserve, began an artillery duel against the allied left.

The decisive action of the battle took place in the centre, famously due to a misunderstanding of orders. Friedrich von Spörcken's division, composed of the infantry of the British contingent of the allied army (two brigades under Earl Waldegrave and William Kingsley) and supported by the Hanoverian Guards, actually advanced to attack the French cavalry. It is reported that they had been ordered "to advance [up-]on the beating of drums" (i.e., advance when the signal drums begin to beat,) misunderstanding this as "to advance to the beating of drums" (i.e., advance immediately while beating drums.) Since the French cavalry was still in its ranks and the famous 'hollow square' had not yet been developed, it was assumed by all that the six leading British regiments were doomed. Despite being under constant artillery fire, the six regiments (soon supported by two Hanoverian battalions), by maintaining fierce discipline and closed ranks, drove off repeated cavalry charges with musket fire and inflicted serious casualties on the French. Contades reportedly said bitterly, "I have seen what I never thought to be possible—a single line of infantry break through three lines of cavalry, ranked in order of battle, and tumble them to ruin!"[8]

Supported by the well-served British and Hanoverian artillery, the entire allied line eventually advanced against the French army and sent it fleeing from the field. The only French troops capable of mounting any significant resistance were those of de Broglie, who formed a fighting rear guard.

Prince Ferdinand's army suffered nearly 2,800 men killed and wounded; the French lost about 7,000 men.[2] In the wake of the battle the French retreated southwards to Kassel. The defeat ended the French threat to Hanover for the remainder of that year.

Ferdinand's cavalry commander, Lieutenant General Lord George Sackville, was accused of ignoring repeated orders to bring up his troopers and charge the enemy until it was too late to make any difference. In order to clear his name he requested a court martial, but the evidence against him was substantial and the court martial declared him "...unfit to serve His Majesty in any capacity whatsoever." [9] Sackville would later reappear as Lord George Germain and bear a major portion of the blame for the outcome of the American Revolution while Secretary of State for the Colonies.

In Britain the result at Minden was widely celebrated and was seen as part of Britain's Annus Mirabilis of 1759 also known as the "Year of Victories", although there was some criticism of Ferdinand for not following up his victory more aggressively. When George II of Great Britain learned of the victory, he awarded Ferdinand £20,000 and the Order of the Garter.[10] Minden further boosted British support for the war on the continent, and the following year a "glorious reinforcement" was sent, swelling the size of the British contingent in Ferdinand's army.[11]

In France the reaction to the result was severe. The Duc de Choiseul, the French Chief Minister, wrote "I blush when I speak of our army. I simply cannot get it into my head, much less into my heart, that a pack of Hanoverians could defeat the army of the King". To discover how the defeat had occurred and to establish the general condition of the army, Marshal d'Estrées was sent on a tour of inspection. Marshal de Contades was subsequently relieved of his command and replaced by the Duc de Broglie.[12]

The British regiments which fought at Minden (with the successor British army unit which still uphold their traditions) were:

The descendents of these units are still known as "the Minden Regiments."

When the British infantry and artillery were first advancing to battle they passed through some German gardens and the soldiers picked roses and stuck them in their coats. In memory of this, each of the Minden regiments marks 1 August as Minden Day. On that day the men of all ranks wear roses in their caps. Royal Anglians, The Royal Regiment of Fusiliers and the PWRR wear red and yellow roses; the SCOTS wear red; RIFLES wear Yorkshire white roses. From this tradition, and to mark the heroism of the Yorkshiremen who fought, 1 August has been adopted as Yorkshire Day. The R WELSH do not wear roses on Minden Day as the Minden Rose was incorporated into the roundell of the capbadge of the Royal Welch Fusiliers and so is worn every day of the year. Retired members of the Regiment do sport roses in the lapels on Minden Day. Artillery regiments with Minden associations (see below) wear red roses.

This British victory was also recalled in the British Army's Queen's Division which maintained the "Minden Band" until its 2006 amalgamation with the "Normandy Band" to form the Band of the Queen's Division.

Every year from 1967 to 2015, six red roses have been anonymously delivered to the British consulate in Chicago on 1 August. Until they were closed, roses were also delivered to consulates in Kansas City, Minneapolis and St. Louis, starting as early as 1958 in Kansas City. A note that comes with the roses lists the six regiments and says, "They advanced through rose gardens to the battleground and decorated their tricorne hats and grenadier caps with the emblem of England. These regiments celebrate Minden Day still, and all wear roses in their caps on this anniversary in memory of their ancestors." The Embassy has asked for the name of the sender (on numerous occasions) so that they may thank the individual in person, but the identity of the donor remains a mystery.[15][16][17][18][19][20]