From Infogalactic: the planetary knowledge core
Jump to: navigation, search
For the battle near Wiesloch in 1632, see Battle of Wiesloch (1632). 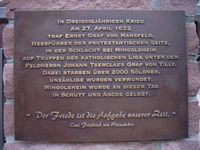 Memorial plate of the Battle of Mingolsheim

Early in the spring of 1621, a mercenary force under the command of Georg Friedrich, Margrave of Baden-Durlach, crossed the Rhine River from Alsace to junction with a force under Ernst von Mansfeld. Combined, the armies aimed to prevent a link-up between Count Tilly and Gonzalo Fernández de Córdoba, arriving with an army 20,000 strong from the Spanish Netherlands under orders from General Ambrosio Spinola. Tilly met the Protestant army at its rear guard and drove upon it. This attack was successful until he engaged the main Protestant body, and was then rebuffed. Tilly retreated and bypassed the stationary Protestant army to link up with de Córdoba later that month. After the battle, Mansfeld found himself at a distinct disadvantage until the armies of Christian of Brunswick could arrive from the north. The two armies would engage later in the month at the Battle of Wimpfen.