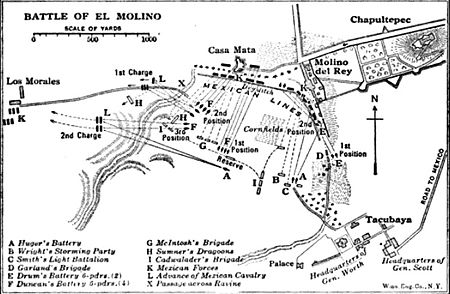 On 6 September 1847, Scott ended the armistice following the Battle of Churubusco as negotiations broke down, as it became clear Antonio Lopez de Santa Ana was preparing to resume fighting.[1]:307 On 7 Sept., a large number of Mexican horsemen were observed around a group of low, massive stone buildings known as El Molino del Rey or King's Mill.[1]:308 Spread across the distance of this point, they were about 1,000 yards (0.91 km) west of the Castle at Chapultepec, which itself was about two miles (3 km) from the gates of Mexico City. A large grove of trees separated the Mill from the castle, while the castle's batteries covered the area.

General Winfield Scott received reports that the trees masked a foundry for casting cannon, and there were rumors that Antonio López de Santa Anna, leader of both the Mexican government and military, in desperate need of ordnance, was sending out church and convent bells to have them melted down and converted to cannon.[1]:308 Scott ordered General Worth to attack and take the Mill, break up the factory, and destroy any munitions found.[1]:308

At 5:45 AM, on 8 September, Worth sent an assault column of 500 men, the 8th Infantry led by Major George Wright, down a gently sloping plain against the western end of the buildings.[1]:309 Behind them he placed Colonel Charles F. Smith's light battalion and George Cadwalader's brigade in the center, and to their right was Garland's brigade and a battery under Captain Simon H. Drum. On the left, attacking the Casa Mata, was Colonel James Duncan's battery and a brigade commanded by Colonel James S. McIntosh.[1]:309 Major Edwin V. Sumner commanded three squadrons of dragoons on the left flank.[1]:309 Captain Huger's heavy guns provided support.[1]:308

Worth sent the Voltigeur Regiment and the 11th Infantry into the assault, while Scott sent in the 9th Infantry.[1]:310 General Leon and Col. Lucas Balderas were killed.[1]:310 Brigadier General Matias Pena y Barragan led two counterattacks but the Americans were able to force two gates and then fight room to room to take the mill after two hours, but found only a few gun molds.[1]:310 The Casa Mata caught fire and blew up near noon, causing more casualties, but by 1 PM, the Americans were back where they started.[1]:311 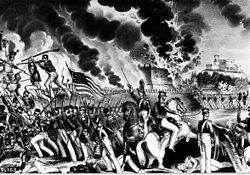 Contemporary lithograph portraying the "Blowing up the Foundry by the Victorious American Army under General Worth."

Col. Hitchcock called the battle a Pyrrhic victory for the Americans.[1]:311 Scott still needed an assault path into the city, despite the destruction of Molino del Rey.[1]:311 Preparations began immediately thereafter for the Battle of Chapultepec.