The Battle of Montes Claros, was fought on 17 June, 1665, near Vila Viçosa, between Spanish and Portuguese as the last battle in the Portuguese Restoration War. It was a great Portuguese victory and is considered as one of the most important battles in the country's history.

The Spanish were determined to end Portuguese independence. The Marquis of Caracena had planned to march to occupy Lisbon, taking first Vila Viçosa, followed by Setúbal.

The Portuguese were prepared and had foreseen such an attack. 3,500 men were moved from Trás-os-Montes in the north to Alentejo in the south. A further 7,800 men came from Lisbon, under command of António Luís de Meneses, who had beaten the Spanish in the Battle of the Lines of Elvas, six years earlier.

Caracena's army moved into Portugal. He first took Borba without resistance, after it that had been abandoned by the Portuguese. He then moved to Vila Viçosa, that was well defended and offered a stiff resistance to the attackers.

Meanwhile, the main body of the Portuguese army had set itself in motion towards the besieged city, but it stopped in Montes Claros, halfway between Vila Viçosa and Estremoz.

Caracena, informed of the approach of the Portuguese army, gave immediate orders to march towards the enemy. 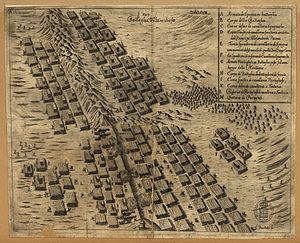 Contemporary Italian engraving of the battle

The Spanish cavalry attacked in great numbers, and opened breaches in the Portuguese infantry lines. Then they were met by hails of artillery fire and had to withdraw.

A second Spanish cavalry attack again caused many casualties in the Portuguese infantry lines, but again they had to withdraw with considerable losses, due to artillery fire.

The battle raged on and the fighting was extremely intense. The Count of Mertola, commander of the British contingent and military advisor, had his horse shot from underneath him.

The Spanish had placed all their hopes on the cavalry charges and started to lose hope.

After 7 hours of fighting, the Portuguese launched a counterattack. The Spanish army started to fall apart and fled in disorder towards Badajoz, leaving behind all their artillery and many dead, wounded and prisoners, the latter being eight generals.[14]

This battle definitively secured the Portuguese independence from Spain. The Spanish did not attempt another invasion, and signed the Treaty of Lisbon three years later, recognizing Portugal's new ruling dynasty, the House of Braganza.