From Infogalactic: the planetary knowledge core
(Redirected from Battle of Montmartre)
Jump to: navigation, search
For other uses, see Battle of Paris (disambiguation). 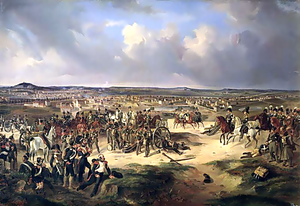 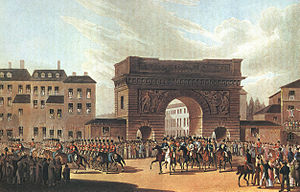 Napoleon was retreating from his failed invasion of Russia in 1812. With the Russian armies following up victory, the Sixth Coalition was formed with Russia, Austria, Prussia, Great Britain, Sweden, Spain and other nations hostile to the French Empire. Even though the French were victorious in the initial battles during their campaign in Germany, the Coalition armies eventually joined together and defeated them at the Battle of Leipzig in the autumn of 1813. After the battle, the Pro-French German Confederation of the Rhine collapsed, thereby losing Napoleon's hold on Germany east of the Rhine. The supreme commander of the Coalition forces in the theatre and the paramount monarch among the three main Coalition monarchs, the Russian Tsar Alexander I, then ordered all Coalition forces in Germany to cross the Rhine and invade France.

The Coalition forces, numbering more than 400,000[1] and divided into three groups, finally entered northeastern France in January 1814. Facing them in the theatre are the French forces numbering only about 70,000 men, but they have the advantage of fighting in friendly territory and shorter supply lines and more secure lines of communication.

Utilizing his advantages, Napoleon defeated the divided Coalition forces in detail, starting with the battles at Brienne and La Rothière, but could not stop the latter's advance. He then launched his brilliant six-day campaign against the huge Coalition army, under Blucher, threatening Paris to its northeast at the Aisne River. He successfully defeated and halted it, but could not seize the strategic initiative back in their favor as Blucher's forces were still largely intact.

The Austrian emperor Francis I and King Frederick William III of Prussia felt very demoralized upon hearing the setbacks brought about by Napoleon's victories since the start of the campaign. They even considered ordering a general retreat. But the Tsar Alexander I was far more determined than ever to victoriously enter Paris whatever the cost, imposing his will upon Schwarzenberg and the wavering monarchs.

Meanwhile, shifting his forces from the Aisne to this sector, Napoleon and his army engaged another Coalition army, under Schwarzenberg, which was also threatening Paris to its southeast near the Aube River, at the Battle of Arcis-sur-Aube on 20 March. He was successful in defeating this army, but it was not enough to halt it in time, as it later linked up with Blucher's army at Meaux on 28 March. After this the Coalition forces advanced yet again towards Paris.

Until this battle it had been nearly 400 years since a foreign army had entered Paris, during the Hundred Years' War.

Since the disaster in Russia and the start of the war, the French populace had been increasingly becoming war-weary.[2] France had been exhausting itself at war for 25 years, and many of its men had died during the wars Napoleon had fought until then, making conscription there increasingly unpopular. Once the Coalition forces entered France, the leaders were astonished and surprised upon seeing that against their expectations and fears the populace never staged a popular uprising against them, in the scale of the popular guerrilla war in Spain or Russia's patriotic resistance against the Grande Armée in 1812. Even Napoleon's own ex-foreign minister, Charles Maurice de Talleyrand, sent a letter to the Coalition monarchs stating that the Parisians are already becoming angry against their Emperor and would even welcome the Coalition armies as if they are to enter the city.

The leaders of the Coalition decided that Paris, and not Napoleon himself, was now the main objective. For the plan, some generals proposed their respective plans, but one, that of the Swedish marshal Toll, fitted precisely what Tsar Alexander I had in mind; attack Paris head-on with the main Coalition army while redirect Napoleon as far away from the city as possible.

The Tsar intended to ride out to meet the Prussian king and Schwarzenberg. They met on a road leading directly to Paris and the Tsar proposed his intentions. He brought a map and spread it to the ground for all of them to see as they talked about the plan. The plan was for the entire main Coalition army to stop pursuing Napoleon and his army and instead march directly to Paris. The exception was Wintzingerode's 10,000-strong cavalry detachment and eight horse batteries which were to follow and mislead Napoleon that the Coalition army was still pursuing him southwards. As was usual, the king agreed as did Schwarzenberg. The main Coalition army began its march towards Paris on 28 March, and at the same day Wintzingerode's unit was now performing his task.

The deception campaign worked. While the main Coalition army attacked Paris, Wintzingerode's unit hotly pursued Napoleon and his rag-tag army to the southeast, but was later beaten back by the latter. However, by the time the emperor knew of the subterfuge by the end of the engagement, he was already too far away to the southeast of Paris, which by this time was now faced with Coalition forces. He would never reach the city in time, thus he also could not participate in the upcoming battle for the city.

The Austrian, Prussian and Russian armies were joined together and put under the command of Field Marshal Count Barclay de Tolly who would also be responsible for the taking of the city, but the driving force behind the army was the Tsar of Russia and the King of Prussia, moving with the army. The Coalition army totaled about 150,000 troops. Napoleon had left his brother Joseph Bonaparte in defense of Paris with about 23,000[3] regular troops under Marshal Auguste Marmont along with an additional 6,000 National Guards and a small force of the Imperial Guard under Marshals Bon Adrien Jeannot de Moncey and Édouard Mortier. Assisting the French is the incomplete trenches and other defenses in and around the city.

The Coalition army arrived outside Paris in late March. Nearing the city, Russian troops broke rank and ran forward to get their first glimpse of the city. Camping outside the city on March 29, the Coalition forces were to assault the city from its northern and eastern sides the next morning in March 30. The battle started that same morning with intense artillery bombardment from the Coalition army. Early in the morning the Coalition attack began when the Russians attacked and drove back the French skirmishers near Belleville[4] before themselves driven back by French cavalry from the city's eastern suburbs. By 7:00 a.m. the Russians attacked the Young Guard near Romainville in the center of the French lines and after some time and hard fighting pushed them aback. A few hours later the Prussians, under Blücher, attacked north of the city and carried the French position around Aubervilliers, but did not press their attack.

The Württemberg troops seized the positions at Saint-Maur to the southwest, with Austrian troops in support. The Russians attempted to press their attack but became caught up by trenches and artillery before falling back before a counterattack of the Imperial Guard. The Imperial Guard continued to hold back the Russians in the center until the Prussian forces appeared to their rear.

The Russian forces then assailed the Montmartre Heights in the city's northeast, where Joseph's headquarters had been at the beginning of the battle, which was defended by Brigadier-general Baron Christiani. Control of the heights was severely contested, and Joseph fled the city. Marmont contacted the Coalition and reached a secret agreement with them. Shortly afterwards, he marched his soldiers to a position where they were quickly surrounded by Coalition troops; Marmont then surrendered, as had been agreed.

Alexander sent an envoy to meet with the French to hasten the surrender. He offered generous terms to the French and, although willing to avenge Moscow more than a year earlier, declared himself to be bringing peace to France rather than its destruction. On March 31 Talleyrand gave the key of the city to the Tsar. Later that day the Coalition armies triumphantly entered the city with the Tsar at the head of the army followed by the King of Prussia and Prince Schwarzenberg. On April 2, the Senate passed the Acte de déchéance de l'Empereur, which declared Napoleon deposed.

Napoleon had advanced as far as Fontainebleau when he heard that Paris had surrendered. Outraged, he wanted to march on the capital, but his marshals would not fight for him and repeatedly urged him to surrender. He abdicated in favour of his son on 4 April. The Allies rejected this out of hand, forcing Napoleon to abdicate unconditionally on April 6. The terms of his abdication, which included his exile to the Isle of Elba, were settled in the Treaty of Fontainebleau on April 11. A reluctant Napoleon ratified it two days later. The War of the Sixth Coalition was over.