After the failure of the tercio system in the first Battle of Breitenfeld in 1631, the professional Spanish troops deployed at Nördlingen proved the tercio system could still contend with the deployment improvements devised by Maurice of Orange and the late Gustavus Adolphus of Sweden.

The Battle of was part of the Thirty Years War, fought from 1618 to 1638. The chief belligerents were the Catholic Hapsburg dynasties consisting of an Austrian and Spanish branch and their allies on one side. (The Austrian king also held the title of Holy Roman Emperor. For this reason, the Austrian Hapsburgs are frequently referred to as the Imperialists..) Opposed to them were the Protestant nations comprising the Dutch, Denmark, Sweden, various German principalities and later, Catholic France.

After the Protestant victory at the Battle of Lützen two years before, the Swedes failed to follow up due to the death of their king, Gustavus Adolphus. As a result, the imperial forces began to regain the initiative.

In 1634 Protestant German and Swedish forces moved south and invaded Bavaria, threatening a major Hapsburg ally. In response, the Austrian Hapsburg commander, Ferdinand of Hungary (son of Ferdinand II, the Holy Roman Emperor) advanced west from Bohemia (today, the Czech Republic) threatening to cut across the supply lines of the Protestant armies. Consequently, the Protestant commanders quickly reversed course and headed north. They were aware that Spanish reinforcements under Ferdinand of Hungary's cousin, the Cardinal-Infante Ferdinand, were en route from their dominions in Northern Italy. The Spanish army had marched through the Stelvio Pass trying to open a new "Spanish Road", and take their Commander to his Governorship in the Spanish Low Countries.

The Protestant commanders decided they could not ignore the threat of a union between the two enemy forces and combined their two largest armies near Augsburg on 12 July which included the Swabian-Alsatian Army under Gustav Horn and the so-called Franconian Army under Bernhard of Saxe-Weimar. Both armies were named after their main operation area and belonged to the Heilbronn Alliance (Sweden's German-Protestant allies under the directorate of the Swedish chancellor Axel Oxenstierna). These forces mostly consisted of German recruits. Among them were ("the Blue brigade") and some Scottish allies ("the Green brigade") with a few national Swedish/Finnish regiments (mostly cavalry) and one national Swedish infantry brigade ("the Yellow brigade").[5][6]

The Protestants proved unable to prevent the fall of Regensburg to Ferdinand of Hungary and desperately pursued him westwards in an effort to prevent the merger of the two Hapsburg armies. On 16 August the Cardinal-Infante crossed the Danube at Donauwörth. Despite their best efforts the Protestant armies were still behind when Ferdinand of Hungary set down to besiege the town of Nordlingen in Swabia and await the Cardinal-Infante who arrived before the city on 2 September - three days before the Protestants.[7]

The cousins, Ferdinand, brother of the Spanish king and known as the Cardinal-Infante and Ferdinand of Hungary (son of Ferdinand II, the Austrian Holy Roman Emperor), prepared for battle, ignoring the advice of more experienced generals such as Matthias Gallas. Most felt a full engagement against two of the most experienced Protestant commanders was reckless and unlikely to have positive results. However the cousins were supported by Count Leganés, the Spanish deputy commander who was confident in their superior numbers, including the reliable Spanish Infantry.

Bernhard and Horn also prepared for battle. Bernhard felt that no matter the odds, an attempt must be made to relieve Nordlingen. Horn seems to have been reluctant given the state of the Protestant armies which were short of supplies. Bernard underestimated the numerically superior enemy forces despite information obtained from a prisoner. The Spanish reinforcements numbered closer to 20,000 not 7,000. In addition, the Spanish and Austrian Imperialists possessed 13,000 horse. By contrast, the combined Protestant forces numbered 16,000 infantry and 9,000 horse. The two Ferdinands drew up their armies between the Protestant forces and the town of Nordlingen, with the left wing anchored at the base of a hill. In the center, Catholic German infantry were placed in front with the Spanish behind them. A contingent of Catholic Germans defended the hilltop. [8] </ref "The Thirty Years War", Cecily V. Wedgwood, pp. 372-373.>

The Protestant commanders came up with the following plan. With half the army, Bernard was to hold the main Imperialist force in check while Horn wheeled the remainder through some woods on the right with the object of taking the hill on the Imperialist left. This would force the enemy to withdraw and relieve Nordlingen. [9]</ref "The Thirty Years War", Cecily V. Wedgwood, P. 373>

On sunrise of September 6, Horn commenced his attack which suffered every kind of bad luck. After laying out careful instructions to his subordinates, the cavalry attacked prematurely, leaving the infantry and artillery behind who were supposed to lead. Despite this blunder, the Catholic Germans holding the hilltop panicked, deserting their batteries. However, the wooded features caused two of Horn's brigades to mistake each other for enemy and they began to exchange fire. Meanwhile, the victorious cavalry dissipated itself chasing down fugitives. [10]</ref "The Thirty Years War", Cecily V. Wedgwood, P. 374>

Taking advantage.of the confusion in Horn's forces, the Cardinal-Infante sent a detachment of Spanish foot and horse which reclaimed the hill. Horn was able to rally his men, but by then, the hilltop was impregnable. Fifteen assaults were made over the next few hours, all of which were beaten back. [11]</ref "The Thirty Years War", Cecily V. Wedgwood, pp. 374-375> Among the defending Spanish forces were the "Tercios Viejos" (Old Tercios), mainly those commanded by Fuenclara, Idiáquez, and Toralto with support from Ottavio Piccolomini's Italian cavalry. The Protestant attacks were led by the brigades Vitzthum, Pfuel and one of the Scots Brigades (Colonel William Gunn), supported by the brigade of Count Thurn (Black and Yellow Regiment).[12]

The Battle of Nördlingen by Jacques Courtois.

Meanwhile in the center, Bernard had avoided battle and prevented the Imperialists from reinforcing their threatened left by skillful use of his artillery. [13]</ref "The Thirty Year's War", Cecily V. Wedgwood, p. 375> However, the Imperial commanders observed the weakened condition of Bernhard's army which had sent reinforcements to assist Horn on the right. At the opportune moment, a general advance was ordered which quickly put Bernard's forces to flight. Pursuit of Bernard's troops threatened to cut off any escape route of the Swedish units under Horn, who also promptly broke.

Gustav Horn af Björneborg was captured and his army destroyed. A small remnant of Protestants fled to Heilbronn. 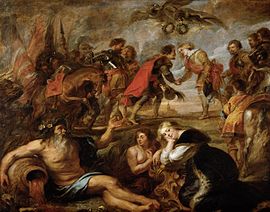 The Victory of the Two Ferdinands Peter Paul Rubens (1635)

The battle was one of the most crushing defeats Protestants ever suffered. With their forces substantially reduced and many German principalities refusing aid, the Swedes withdrew to Northern Germany where they remained inactive for several years. Consequently, the Protestant German princes made a separate peace with the Emperor in the Treaty of Prague. [14] </ref "The Thirty Years War", Cecily V. Wedgwood, Pp. 380, 385-386, 391>.

The chief consequence of Protestant defeat at Nordlingen was to bring France into the war. Faced by Spanish forces all along the frontier, French Prime Minister Richelieu decided the time had come to go beyond merely financing the enemies of the Hapsburgs. War was declared against Spain on May 21, 1635, thus opening a second front on the Spanish Low Countries. Bernard of Saxe-Weimar was given 12,000 French troops and extensive funding. [15] </ref "The Thirty Years War", Cecily V. Wedgwood, Pp. 380, 390-391>.

The Hapsburg triumph at Nordlingen followed by the Treaty of Prague could have been decisive in ending the war. These developments failed because of French determination to continue the conflict. The Swedes would recover, defeating a combined Imperial and Saxon army at the Battle of Wittstock four years after Nördlingen, followed by victories at the Second Battle of Breitenfeld, Jankau and Zusmarshausen. 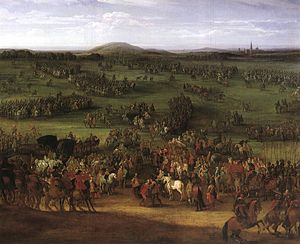 The Battle of Nördlingen by Pieter Meulener