From Infogalactic: the planetary knowledge core
(Redirected from Battle of Oltenitza)
Jump to: navigation, search

The Battle of Oltenița (or Oltenitza) was fought on 4 November 1853 and was the first engagement of the Crimean War. In this battle an Ottoman army under the command of Omar Pasha was defending its fortified positions from the Russian forces led by General Peter Dannenberg, until the Russians were ordered to withdraw.[3]

This battle took place during the Crimean War. In the build-up to war, Russia had occupied the Danubian Principalities of Moldavia and Wallachia, positioning troops on the (northern) left bank of the Danube, the border of Ottoman territory. The Ottoman Empire had responded by moving troops to the right bank to face them. In the centre Russian forces south of Bucharest were faced by Ottoman forces in the fortresses of Rustchuk and Silistria. Following the Ottoman ultimatum on 4 October 1853 to withdraw within 2 weeks, Ottoman forces under Omar Pasha crossed the Danube River from Widin into Kalafat on 28 October 1853 to draw the Russians into the western part of Wallachia.[3] The strength of the two armies, as well as the number of casualties they inflicted on each other, vary in different sources, since each side claimed that the enemy was more numerous and lost a much higher number of troops.[4] 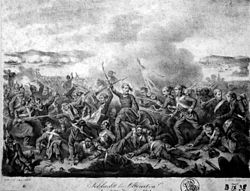 Battle of Oltenița by Karl Lanzedelli 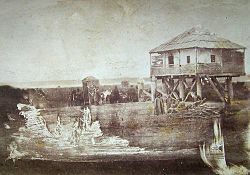 The Oltenița Quarantine in 1854

On 2 November 1853 an Ottoman force under Omar Pasha crossed the Danube in eastern Wallachia and occupied the Danube port town of Oltenița, prior to an advance on Bucharest.[3] With the Russians now in western Wallachia fighting the Ottomans at Calafat, the capture of Bucharest would cut off all communications and supply between Russia and those troops.[3] Having captured Oltenița, the Ottoman troops moved up the north bank of the Danube to attack the large fort located in the town of Turtukai. This fort was protected by ten (10) large guns.[3] This fort was captured by the Ottomans.

In response, a smaller[5][6] Russian force of 6,000[2] under Peter Dannenberg was sent to counterattack, arriving at the town on 4 November 1853.[3] The heavy guns at the fort in Turtukai were used by the 8,000[2] Ottomans against the Russians and after a fierce exchange of fire the Russians were ordered to withdraw, having lost about 900 men in total.[7][8] Their failure was seen as the result of a smaller number of troops, poor reconnaissance and insufficient artillery support, which failed to neutralise the strongest enemy defences, and an order to withdraw that was issued at the time when the Russian troops were already successfully storming the enemy positions.[9][10] Emperor Nicholas I, after having studied the battle in detail, commented that the troops of Dannenberg did not have enough artillery to drive the Ottomans from their defensive positions and suppress the fortified Ottoman cannons, which were supported by other artillery positions built on the right shore of the Danube, and should have fought in a looser formation, using marksmen against the embrasures of the enemy fortifications.[11] Omar Pasha officially declared that he lost about 200,[4] but his real losses are believed to be heavy,[2][12] largely due to the massive use of shrapnel at close range by the Russians.[13] Since the Russians were ordered to withdraw before they could capture the stronghold or receive reinforcements, the battle is considered an Ottoman victory;[2] however, the action persuaded Omar Pasha that his position was untenable; he expected Russian reinforcements to arrive, and was concerned about continuing operations with the onset of winter. Accordingly, he abandoned the advance on Bucharest and re-crossed the Danube. This was completed by 15 November 1853.

The battle of Oltenitza was the first military engagement of the Crimean War. It resulted in a tactical victory for the Ottoman forces, in that the Russians withdrew, and the Ottoman forces were left in possession of the town. Nevertheless, their strategic aim, to advance on Bucharest and drive the Russians from the Principalities, was not accomplished, and the Ottoman forces were obliged to retreat to their start position. The battle was hailed in the European press as an Ottoman triumph, and Russian pride was damaged, but strategically the action had little impact.