In 1716, Grand Vizier Damat Ali gathered a 150,000 strong Ottoman army at Belgrade,[3] at the core of which were 40,000 Janissaries, 20,000 Sipahi, and 10,000 Tatars, together with some renegade Kuruc cavalry. They crossed the Sava at Zemun at the end of July, and moved on the right bank of the Danube towards Sremski Karlovci (in the Habsburg territory). The Tatars, with Moldavians and Kurucs drove into Transylvania, but the Transylvanian forces were no match for the Tatars.[6]

The commander of the Austrian forces, Prince Eugene of Savoy, decided to engage the Ottomans at Petrovaradin. He had arranged for the construction of a fortified encampment within the fortress there, and set the 83,300 strong Imperial army on the march from their quarters in Futog. There was an 8,000 man garrison in the fortress consisting primarily of Serbs.[5] In the Austrian army served Croatian and Hungarian infantry and cavalry regiments (approx. 42,000 men) and Serbian border soldiers in the Vojvodina.

On August 2, the first skirmish between the Imperial vanguard and Ottoman horsemen occurred. By the next day, the Grand Vizier had already reached Petrovaradin and immediately dispatched 30,000 Janissaries against the imperial positions. They dug saps and began to bombard the fortress.

The core of the Imperial army only crossed the Danube on the night of August 5 by two pontoon bridges after which they encamped.

The battle and its effects 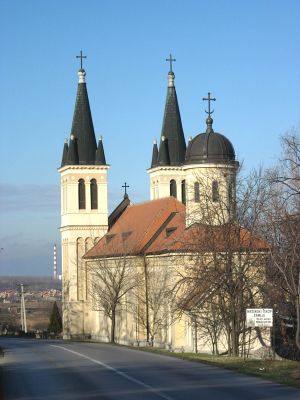 Church of St. Mary of the Snows

At 7 o'clock on the morning of August 5, Prince Eugene began the Austrian offensive. While the right flank under Prince Alexander von Württemberg stormed an Ottoman artillery battery, the Imperials rode into trouble in the center: deployment through the small gate of the fortress proceeded slowly. The Janissaries went on the counter-attack immediately and forced the imperial army back into the fortress. Prince Eugene sealed off the central incursion with additional troops and sent his cavalry into the Ottoman flanks, by which means they were encircled. The Grand Vizier could not manage to break the encirclement with his Sipahis nor could he regroup his troops. The Tatars even pulled back without engaging in combat.

After the defeated Ottomans were wiped out, Prince Eugene personally led his troops against the Grand Vizier's encampment. Supported by the guns of six frigates of the Danube fleet, the battle had been won by two o'clock, with the Grand Vizier himself among the slain. Barely 50,000 Ottomans returned to Belgrade. Soon, from Constantinople came a messenger from the Sultan with order of execution of Damat Ali. He is buried at the Belgrade Fortress, Kalemegdan, in tomb known as Damad Ali Pašino Turbe.

After the war, a church commemorating this event was built on Tekije, on the hill over battlefield, and is dedicated to Our Lady of Tekije, also known as Our Lady of the Snows. The church is special, because it has both Catholic and Orthodox altars and both Christian denominations use it. The site is a place of pilgrimage on every August 5.

After Petrovaradin, Prince Eugene turned against Timişoara (in Ottoman territory) and captured it despite great resistance and desperate attempts by the Ottomans to relieve the town. Eventually, they admitted defeat and signed a treaty with Austria and her ally Venice.