From Infogalactic: the planetary knowledge core
(Redirected from Battle of Poitiers (1356))
Jump to: navigation, search
For the battle of 732 between the Franks and the Saracens, see Battle of Tours.

The Battle of Poitiers was a major battle of the Hundred Years' War between England and France. The battle occurred on 19 September 1356 near Poitiers, France. Preceded by the Battle of Crécy in 1346, and followed by the Battle of Agincourt in 1415, it was the second of the three great English victories of the war.

Edward, Prince of Wales (later known as the Black Prince), the eldest son of King Edward III, began a great chevauchée on 8 August 1356. He conducted many scorched earth raids[3] northwards from the English base in Aquitaine, in an effort to bolster his troops in central France, as well as to raid and ravage the countryside. His forces met little resistance, burning numerous towns to the ground and living off the land, until they reached the River Loire at Tours. They were unable to take the castle or burn the town due to a heavy downpour. This delay allowed John II, King of France, to attempt to catch Edward's army. The King, who had been besieging Breteuil in Normandy, arranged the bulk of his army at Chartres to the north of the besieged Tours, dismissing approximately 15,000–20,000 of his lower-quality infantry to increase the speed of his forces.[4]

Negotiations prior to the Battle of Poitiers

There were negotiations before the battle of Poitiers that are recorded in the writings of the life of Sir John Chandos. He records the final moments of a meeting of both sides in an effort to avoid the bloody conflict at Poitiers. The extraordinary narrative occurred just before that battle and reads as follows:

The conference attended by the King of France, Sir John Chandos, and many other prominent people of the period, The King (of France), to prolong the matter and to put off the battle, assembled and brought together all the barons of both sides. Of speech there he (the King) made no stint. There came the Count of Tancarville, and, as the list says, the Archbishop of Sens (Guillaume de Melun) was there, he of Talaru, of great discretion, Charny, Bouciquaut, and Clermont; all these went there for the council of the King of France. On the other side there came gladly the Earl of Warwick, the hoary-headed (white or grey headed) Earl of Suffolk was there, and Bartholomew de Burghersh, most privy to the Prince, and Audeley and Chandos, who at that time were of great repute. There they held their parliament, and each one spoke his mind. But their counsel I cannot relate, yet I know well, in very truth, as I hear in my record, that they could not be agreed, wherefore each one of them began to depart. Then said the prophetic words of Geoffroi de Charny: 'Lords,' quoth he, 'since so it is that this treaty pleases you no more, I make offer that we fight you, a hundred against a hundred, choosing each one from his own side; and know well, whichever hundred be discomfited, all the others, know for sure, shall quit this field and let the quarrel be. I think that it will be best so, and that God will be gracious to us if the battle be avoided in which so many valiant men will be slain.[5]

Nobles and men-at-arms who fought with the Black Prince

Another account states that John of Ghistelles perished at the Battle of Crécy so there is some ambiguity as to this man.

Nobles and men-at-arms who fought with King John II at, or just prior to, the battle 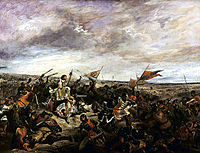 The Battle of Poitiers (1356) Eugène Delacroix

Froissart describes, with less specificity in this passage, some of the nobles that were assembled at, or just prior to the Battle: The Englishmen were shadowed by some expert French knights, who reported back to the king what the Englishmen did. The king came to the Haye in Touraine and his men had passed the river Loire, some at the bridge of Orléans and some at Meung, at Saumur, at Blois, and at Tours and other places: there were twenty thousand men of arms and other soldiers. He estimates there were twenty-six dukes and earls (Counts), more than 120 banners, and the four sons of the king, Duke Charles of Normandy, the Duke Louis, the Duke of Anjou, and John, Duke of Berry, and Lord Philip.[10]

The French army also included a contingent of Scots commanded by Sir William Douglas.[11] Douglas fought in the King's own Battle, but when the fight seemed over Douglas was dragged by his men from the melee. Froissart states that "... the Earl Douglas of Scotland, who fought a season valiantly, but when he saw the discomfiture he departed and saved himself; for in no wise would he be taken by the Englishmen, he would rather there be slain".[12]

Others who were either killed or captured in the battle were: King John II; Prince Philip (youngest son and progenitor of the House of Valois-Burgundy), Geoffroi de Charny, carrier of the Oriflamme, Peter I, Duke of Bourbon, Walter VI, Count of Brienne and Constable of France, Jean de Clermont, Marshal of France, Arnoul d'Audrehem, the Count of Eu, the Count of Marche and Ponthieu Jacques de Bourbon taken prisoner at the battle and died 1361, the Count of Étampes, the Count of Tancarville, the Count of Dammartin, the Count of Joinville, Guillaume de Melun, Archbishop of Sens.[13][14]

At the beginning of the battle, the English removed their baggage train leading the French to think they were about to retreat which provoked a hasty charge by the French knights against the archers.[15] According to Froissart, the English attacked the enemy, especially the horses, with a shower of arrows. Geoffrey the Baker writes that the French armour was invulnerable to the English arrows, that the arrowheads either skidded off the armour or shattered on impact.[16] Given the following actions of the archers, it seems likely Baker was correct. The armour on the horses was weaker on the sides and back, so the archers moved to the sides of the cavalry and shot the horses in the flanks. This was a popular method of stopping a cavalry charge, as a falling horse often destroyed the cohesion of the enemy's line. The results were devastating.[17][18] The Dauphin attacked Salisbury and pressed his advance in spite of heavy shot by the English archers and complications of running into the retreating vanguard of Clermont's force. Green suggests that the Dauphin had thousands of troops with him in this phase of the attack. He advanced to the English lines but ultimately fell back. The French were unable to penetrate the protective hedge the English were using. This phase of the attack lasted about two hours.[19]

This cavalry attack was followed by infantry attack. The Dauphin's infantry engaged in heavy fighting, but withdrew to regroup. The next wave of infantry under Orléans, seeing that the Dauphin's men were not attacking, turned back and panicked. This stranded the forces led by the King himself. This was a formidable fighting force, and the English archers were running very low on arrows; the archers joined the infantry in the fight and some of both groups mounted horses to form an improvised cavalry.

At about this time, King John sent two sons from the battlefield. His youngest son, Philip, stayed with him and fought at his side in the final phase of the battle. When the Dauphin and other sons withdrew, the duke of Orléans also withdrew. Combat was hard, but the Black Prince still had a mobile reserve hidden in the woods, commanded by Jean de Grailly, the Captal de Buch; which was able to circle around and attack the French in the flank and rear. The French were fearful of encirclement and attempted to flee. King John was captured with his immediate entourage only after a memorable resistance.[20]

Amongst the notable captured or killed according to Froissart were: 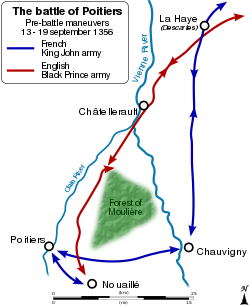 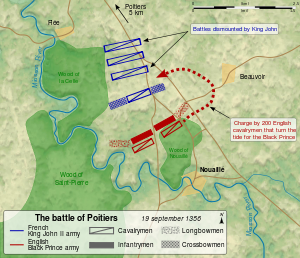 Map of the Battle

The capture of the French king

Froissart again gives us a vivid description of the capture of King Jean II and his youngest son in this passage:

" ... So many Englishmen and Gascons came to that part, that perforce they opened the king's battle, so that the Frenchmen were so mingled among their enemies that sometime there was five men upon one gentleman. There was taken the lord of Pompadour and the lord Bartholomew de Burghersh, and there was slain sir Geoffrey of Charny with the king's banner in his hands: also the lord Raynold Cobham slew the earl of Dammartin. Then there was a great press to take the king, and such as knew him cried, ' Sir, yield you, or else ye are but dead.' There was a knight of Saint Omer's, retained in wages with the king of England, called sir Denis Morbeke, who had served the Englishmen five year before, because in his youth he had forfeited the realm of France for a murder that he did at Saint-Omer's. It happened so well for him, that he was next to the king when they were about to take him: he stept forth into the press, and by strength of his body and arms he came to the French king and said in good French, 'Sir, yield you.' The king beheld the knight and said: 'To whom shall I yield me? Where is my cousin the prince of Wales? If I might see him, I would speak with him.' Denis answered and said: 'Sir, he is not here; but yield you to me and I shall bring you to him.' 'Who be you?' quoth the king. 'Sir,' quoth he, 'I am Denis of Morbeke, a knight of Artois; but I serve the king of England because I am banished from the realm of France and I have forfeited all that I had there.' Then the king gave him his right gauntlet, saying, 'I yield me to you.'" ...[21]

Aftermath of the battle 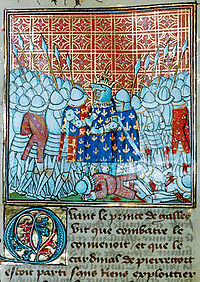 Jean II, the Good, being captured.

As Edward, the Black Prince, wrote shortly afterward in a letter to the people of London:

It was agreed that we should take our way, flanking them, in such a manner that if they wished for battle or to draw towards us, in a place not very much to our disadvantage, we should be the first ... the enemy was discomfited, and the king was taken, and his son; and a great number of other great people were both taken and slain.[22]

Jean de Venette, a Carmelite friar and medieval chronicler vividly describes the chaos in France which he states he himself witnessed, after the time of this Battle.[23] He states:

...From that time on all went wrong with the Kingdom and the state was undone. Thieves and robbers rose up everywhere in the land. The nobles despised and hated all others and took no thought for the mutual usefulness and profit of lord and men. They subjected and despoiled the peasants and the men of the villages. In no wise did they defend their country from enemies. Rather did they trample it underfoot, robbing and pillaging the peasants' goods.[24]

Jean is referring here not only to the French Nobles, but to the Companies who also plundered the peasants and churches.[25]