At the Battle of Resaca de la Palma, one of the early engagements of the Mexican-American War, United States General Zachary Taylor engaged the retreating forces of the Mexican Ejército del Norte ("Army of the North") under General Mariano Arista on May 9, 1846. 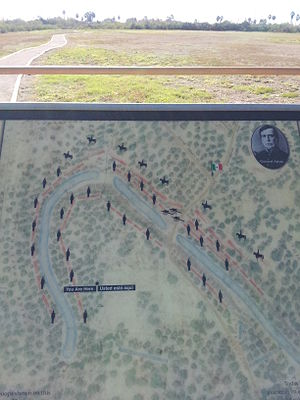 Following his disappointments at the Battle of Palo Alto, Arista on the morning of 9 May moved to a more defensible position along a resaca, old meandering river bed, known as Resaca de la Guerrero but as Resaca de la Palma by the Americans.[1]:59 Recalling his forces besieging Fort Texas, he was established along the twelve foot deep and 200 foot wide resaca, three miles from the Rio Grande, by 10 AM.[1]:59 Arista placed most of his infantry in the ravine, thickly forested on either side, to negate the effectiveness of Taylor's artillery, with the 6th and 10th Infantry, Sappers, 2nd Light Infantry and 1st Infantry east of the road, and the 2nd Infantry, Tampico Battalion and 4th Infantry west of the road.[1]:59–60 Covering the flanks in the rear were the Presidiales, the light cavalry, and the 7th and 8th Regiments, including batteries on the south bank.[1]:60

Taylor reached the area about 3 PM and ordered Capt. William W. Mackall's skirmishers and Capt. Randolph Ridgely's battery along the road, with the 4th and 5th Infantry to the left and the remaining 4th and 3d Infantry on the right.[1]:60

Fighting was disorganized and uncoordinated due to the dense chaparral and the intense Mexican artillery fire, although Ridgely did repulse a lancer charge.[1]:60 Taylor ordered a charge by Capt. Charles A. May's dragoon squadron with the objective of clearing the Mexican battery, May's exchange with Ridgeley supposedly included, "Hello Ridgely, where is that Battery? I am ordered to charge it." "Hold on Charley, 'till I draw their fire and you will see where they are."[1]:60 May's charge however carried them well past the guns and although he captured General Romulo Diaz de la Vega, he could not hold the guns.[1]:62 Taylor then ordered William G. Belknaps 5th and 8th Infantry to secure the guns, which they did.[1]:62 The Mexicans east of the road then retreated.[1]:62

West of the road, Capt. Robert C. Buchanan and members of the 4th Infantry, found a trail which turned the Mexican left flank, enabling them to take and hold the battery located there. They were able to defend the position from General Pedro de Ampudia's counterattacks, and the entire Mexican force panicked and fled across the Rio Grande, many drowning.[1]:62

Taylor's army settled into their Fort Texas campsite as Taylor considered his next move, although he did exchange prisoners with Arista.[1]:81 Taylor crossed the Rio Grande on 18 May, Arista's army having abandoned their artillery, sick and wounded at Linares, Nuevo Leon during their retreat to Monterrey.[1]:82

The Resaca De La Palma Battlefield is in the city limits of present day Brownsville, Texas, but is part of the Palo Alto Battlefield National Historical Park.