The Battle of Rocroi of 19 May 1643 resulted in the victory of a French army under the Duc d'Enghien against the Spanish Army under General Francisco de Melo only five days after the accession of Louis XIV of France to the throne of France, late in the Thirty Years' War. The battle is considered by many the turning point of the perceived invincibility of the Spanish tercio. 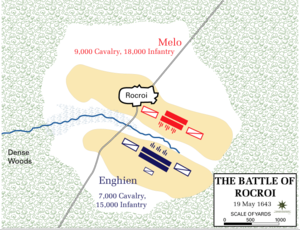 Map of the troop dispositions

The Habsburg Spanish army of about 27,000 men advanced from Flanders, through the Ardennes, and into northern France to relieve French pressure on the Franche-Comté and Catalonia. The Spanish troops set siege to Rocroi, which lay athwart the route to the valley of the Oise. The French, under the command of 21-year-old Louis, duc d'Enghien, reacted quickly and forced a battle before the arrival of 6,000 Spanish reinforcements. The Spanish failed to block the route to Rocroi, which passed through a defile bordered by woods and marsh. Enghien advanced through the defile and assembled his force along a ridge looking down on the besieged town of Rocroi. The Spanish quickly formed up between the town and the ridge. The French army, some 23,000 strong, was arranged with two lines of infantry in the center, squadrons of cavalry on each wing and with a thin line of artillery at the front. The Spanish army was similarly arranged, but with its infantry in their traditional tercios, or squares. The two armies bivouacked in their positions for the night. 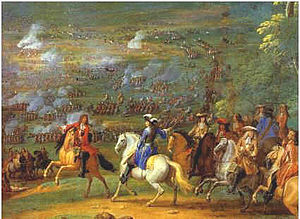 Duc d'Enghien at the Battle of Rocroi 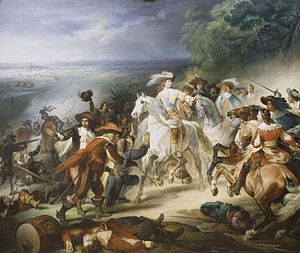 The Duc d'Enghien ordering his troops to stop fighting the Spanish, who have come to him to surrender (Galerie des Batailles)

Enghien now carried out a huge cavalry encirclement, sweeping behind the Spanish army and smashing his way through to attack the rear of the Spanish cavalry, which was still in combat with his reserves. The Spanish horse was put to flight, leaving the Spanish infantry to carry on the fight. The French were twice repulsed by the stubborn Spanish squares, so Enghien arranged for his artillery and captured Spanish guns to blast them apart.

The German and Walloon tercios fled from the battlefield, while the Spanish remained on the field with their commander, repulsing four cavalry charges by the French and never breaking formation, despite repeated heavy artillery bombardment. Enghien then offered surrender conditions just like those obtained by a besieged garrison in a fortress. Having agreed to those terms, the remains of the two tercios left the field with deployed flags and weapons.[4]

The battle was an important propaganda victory for Mazarin and Enghien, the future "Great Condé" and represented a weakening of the besieged Spanish Low Countries. It was also of symbolic importance, as it was one of the few major battlefield defeats of a Spanish army in over a century and, moreover, a defeat of one of its most famous units. It has been noted that Melo's German, Walloon, and Italian troops actually surrendered first, while the Spanish infantry surrendered only after standing hours of infantry and cavalry charges and a vicious spell under the French guns. They were given the treatment usually given to a fortress garrison and retired from the field with their arms, flags and honors. Military intervention by Bourbon France had proved a very different matter from the Valois contests of the previous century; it was the new nature and weight of absolute monarchy in France which was now to encompass the downfall of Spanish imperial power in Europe.[5] With the end of the French Wars of Religion, Cardinal Mazarin slowly turned the tide against the Spanish in France and in the Low Countries. Mazarin's alliance with England resulted in the defeat of the Spanish Army of Flanders at the Battle of the Dunes and consequently the Treaty of the Pyrenees. Although Spain looked to be all-powerful in 1652, the peace settlement reflected the demise of Spain's mastery of Europe in the late 1650s.[6]

A 2006 Spanish movie, Alatriste, directed by Agustín Díaz Yanes, portrays this battle in its final scene. The soundtrack features in this scene a funeral march, La Madrugá, composed by Colonel Abel Moreno for the Holy Week of Seville, played by the band of the regiment Soria 9, heir of that which participated in the battle, the oldest unit in the Spanish Army, and since nicknamed "the bloody Tercio".[citation needed]

The sedan chair belonging to the elderly Spanish infantry general Fontaines (who was from the Spanish Netherlands - now Belgium - and was known to the Spanish as Fuentes) was taken as a trophy by the French and may be seen in the museum of Les Invalides in Paris. Fontaines was killed in the battle; Enghien is reported to have said, "Had I not won the day I wish I had died like him".