Frederick the Great defeated an allied army mainly composed of French forces supported by a Holy Roman/Austrian Empire contingent. This battle is considered one of his greatest masterpieces due to his use of rapid movement to achieve complete surprise, crippling an enemy army while suffering negligible casualties.

The Franco-Imperial allied army became an immediate danger after marching into Thuringia. Elsewhere, strategically, the Austrian army was not as immediate a threat and the Russians were too far away to deal any damage. Using interior lines, Frederick was able to advance against the Franco-Imperial army. Frederick set out from Dresden on August 31 with 25,000 men and managed a very long and arduous march reminiscent of the Frederick William I, the Great Elector. Covering 170 miles in 13 days he bought supplies ahead of the army and abandoned his supply wagons to speed his march. Bringing the enemy to battle proved difficult, as the allies tried to stay out of reach. Both Frederick and his enemies moved back and forth for quite some time, trying to maneuver around each other and ending up in a stalemate situation. During this time an Austrian raiding party had actually attacked Berlin and almost captured the Prussian royal family.

The Prussian camp on the morning of 5 November 1757 lay between Rossbach on the left and Bedra on the right facing the Allies. The French general, Charles de Rohan, prince de Soubise, and Austrian Joseph Maria Frederick Wilhelm, duke of Saxe-Hildburghausen, General Feldzeugmeister of the Empire, had maneuvered in the preceding days without giving Frederick an opportunity to bring them to action and now lay to the westward with their right near Branderoda and their left at Mücheln. The advanced posts of the Prussians stood in the villages immediately west of their camp, those of the Allies on the Schortau hill and the Galgenberg.

The Allies with about 42,000, irrespective of detachments, possessed a numerical superiority of two to one in the battle itself. Their advanced post overlooked all parts of Frederick's camp. They had had the best of it in the manoeuvres of the previous days, and the duke of Hildburghausen determined to take the offensive. He had some difficulty, however, in inducing Soubise to risk a battle so the Allies did not begin to move off their campground until after eleven on the 5th. Soubise probably had the intention to engage as late in the day as possible with the idea of gaining what advantages he could in a partial action. Their plan called for the Allied army to march by Zeuchfeld, around Frederick's left, which no serious natural obstacle covered, and to deploy in battle array facing north, between Reichardtswerben on the right and Pettstädt on the left. The duke's proposed battle and the more limited aim of Soubise appeared equally likely to succeed in taking this position, which threatened to cut Frederick off from the towns on the Saale. But the Allies could only attain this position by marching around the Prussian flank, which would have put them in the tenuous position of marching across their enemies' front. The Allies posted a considerable guard against the obvious risk of interference on their exposed flank.

Frederick spent the morning watching them from a house-top in Rossbach. The initial stages of their movement convinced him that the Allies had started retreating southward towards their magazines and about noon he went to dinner, leaving Captain von Gaudi on the watch. This officer formed a different impression of the Allies' intentions because the columns, which from time to time became visible in the undulations of the ground, appeared to turn eastwards from Zeuchfeld. Gaudi's excited report at first served only to confirm Frederick in his error. But when the king saw for himself that hostile cavalry and infantry had already approached near to Pettstädt, he realized the enemy's intentions. The Allies now offered him the battle for which he had manoeuvred in vain and he took it without hesitation.

The Prussian army broke camp, leaving a handful of light troops to oppose the French advanced post. This was the flank guard on the Schartau hill. The Allies were marching in normal order in two main columns, the first line on the left, the second line on the right; farther to the right marched a column consisting of the foot reserve, and between the first and second lines was the reserve artillery on the road. The right wing cavalry was at the head and the left wing cavalry at the tail of the two main columns. At first, they retained regulation distance, but when wheeling eastward toward Zeuchfeld much confusion arose. Part of the reserve infantry moved in between the two main columns hampering the movements of the reserve artillery. The rest on the outer flank of the wheel found themselves unable to keep up with the overly rapid movement of the wheeling pivot.

Half an hour after the king gave the order, the Schartau hill flank guard attacked the enemy. A weak Allied flank guard was thrown out towards Rossbach. When, as far as could be judged, it was seen that the Prussians were moving eastward, the Allies presumed that the Prussians were about to retreat in order to avoid being taken in flank and rear. The Allied generals thereupon hurried the march, sending on the leading (right wing) cavalry towards Reichardtswerben. They also called up part of the left wing cavalry from the tail of the column and even the flank guard cavalry to take part in the general chase. This proved to be a deadly mistake.

The Trap is Sprung 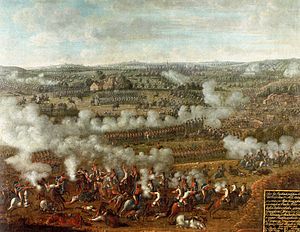 Contemporary painting of the battle

Soubise and the Duke had taken more than three hours to break camp, and found it difficult to suppose that Frederick's army could move off in one-sixth that time. It seemed obvious, moreover, that the Prussians were not deploying for battle on the plain in front of Rossbach and Nahlendorf. They failed to realize that Frederick's move meant an attack upon them before they could form up.

Frederick had no intention either of forming up parallel to the enemy or of retreating. His army could move as a unit twice as fast as the enemy's and he intended to make a detour, screened by the Janus and the Pölzen hill, and to fall upon the Allies suddenly from the east. If at the moment of contact the Allies had already formed their line of battle facing north, the attack would strike their right flank; if they were still on the move in column eastwards or north-eastwards, the heads of their columns would be crushed before the rest could deploy in the new direction – deployment in those days being a lengthy affair for most armies. To this end General von Seydlitz, with every available squadron, hurried eastward from Rossbach, behind the Janus hill, to the Pölzen hill; Colonel von Moller, with eighteen heavy guns, came into action on the Janus hill at 315 against the advancing columns of the Allied cavalry. The infantry followed as fast as possible.

When they came under the fire of Moller's guns, the Allied squadrons, which now lay north of Reichardtswerben and well ahead of their own infantry, suffered somewhat heavily; but it was usual to employ heavy guns to protect a retreat, and the Allies contented themselves with bringing some fieldguns into action. They were, however, amazed when von Seydlitz's thirty-eight squadrons, or seven regiments, suddenly rode down upon the head and right flank of their columns from the Pölzen hill at an incredible speed. The leading Austrian regiments deployed to meet von Seydlitz's squadrons, but the result was scarcely in doubt for a moment. Von Seydlitz threw in his last squadron, and then himself fought like a trooper, receiving a severe wound. The mêlée drifted rapidly southward, past the Allied infantry, and von Seydlitz finally rallied his horsemen in a hollow near Tagewerben, ready for fresh service. This first episode took only half an hour, and by that time the Prussian infantry, in echelon from the left, were descending the Janus hill to meet the already confused and disheartened infantry of the Allies. Most of the allied cavalry in front were smashed to pieces by the initial charge and many of them trampled over their own men trying to flee.

As the cavalry had done, the Allied infantry managed to deploy some regiments at the head of the column. The French in particular formed one or two columns of attack, then peculiar to the French army, and rushed forward with the bayonet rather than advance in order with regular fire. But Moller's guns, which had advanced with the infantry, tore gaps in the closed French masses. When the French columns arrived within effective musketry range, the attack died out before the rapid and methodical volleys of the Prussian line.

Meanwhile the Allies tried in vain to form a line of battle. The two main columns had maneuvered too closely together in the advance from Pettstädt. Part of the reserve which had become entangled between the main columns was extricating itself by degrees and endeavoring to catch up with the rest of the reserve column away to the right and the reserve artillery proved useless in the middle of the infantry. The Prussian infantry was still in echelon from the left, and the leftmost battalions that had repulsed the French columns quickly came within musket-shot of this helpless mass. A few volleys directed against the head and left flank of the column sufficed to create disorder, and then from the Tagewerben hollow von Seydlitz's rallied squadrons charged, wholly unexpectedly, upon its right flank.

The Allied infantry thereupon broke and fled. Soubise and the duke, who had received a wound, succeeded in keeping one or two regiments together, but the rest scattered over the countryside. The battle had lasted less than an hour and a half and the last episode of the infantry fight no more than fifteen minutes. Seven Prussian battalions only had engaged with the enemy and these expended five to fifteen rounds per man.

Von Seydlitz and Prince Henry of Prussia, the cavalry and the infantry leaders engaged were both wounded. The French and Imperial troops lost six generals, an unusually high count in eighteenth century warfare, although not surprising given the emphasis on cavalry action in this battle. The fallen French generals included Guy Nicolas de Durfort de Lorges, Comte de Durfort; Philippe-Joseph, Comte de Custine (father of the French Revolutionary Wars general Adam Philippe, Comte de Custine); Comte de Doyat; Vicomte de Lafayette[Note 1] Comte de Revel; and Brigadier Duc de Beauvilliers. The total losses are controversial. Some sources state that the Prussians lost 500, and the French and Austrians 10,000.[2] Gaston Bodart accounts for 170 Prussian dead (including seven officers), and 430 wounded (including four generals and 19 officers), which totals about 2.4% of the total Prussian force. Among the French and German Imperial troops, he accounts 1,000 dead (including six generals), 2,400 wounded (including four generals), and a total of 8.3 % wounded or dead, and 12.2% missing or captured. More impressively, the Prussians took as trophies 72 cannons (62% of the French/Imperial artillery) and seven flags, and 21 standards. [3]

After the battle, Frederick reportedly said: "I won the battle of Rossbach with most of my infantry having their muskets shouldered." Frederick the Great had discovered operational maneuvers and with about 3,500 horsemen had defeated an entire Army of two combined European powers.

French interest for the so-called Prussian war declined sharply after the Rossbach debacle and with the signing of Third Treaty of Versailles in March 1759, France reduced its financial and military contributions to the coalition.[4]

Today, most of the battlefield is covered in farmland and an open faced mine that later filled with water to create a lake. There is a museum dedicated to the battle in Reichardtswerben nearby Rossbach, which contains several artifacts and large diorama of the battle.