The Siege of Seringapatam (5 April – 4 May 1799) was the final confrontation of the Fourth Anglo-Mysore War between the British East India Company and the Kingdom of Mysore. The British, with the allied Nizam of Hyderabad, achieved a decisive victory after breaching the walls of the fortress at Seringapatam and storming the citadel. Tipu Sultan, Mysore's ruler, was killed in the action.[1] The British restored the Wodeyar dynasty to the throne after the victory, but retained indirect control of the kingdom.

The battle consisted of a series of encounters around Seringapatam (the anglicized version of Srirangapatnam) in the months of April and May 1799, between the combined forces of the British East India Company and their allies, numbering over 50,000 soldiers in all, and the soldiers of the Kingdom of Mysore, ruled by Tipu Sultan, numbering up to 30,000. The Fourth Anglo-Mysore War came to an end with the defeat and death of Tipu Sultan in the battle.

When the Fourth Anglo-Mysore War broke out, the British assembled two large columns under General George Harris. The first consisted of over 26,000 British East India Company troops, 4,000 of whom were European while the rest were local Indian sepoys. The second column was supplied by the Nizam of Hyderabad, and consisted of ten battalions and over 16,000 cavalry. Together, the allied force numbered over 50,000 soldiers. Tipu's forces had been depleted by the Third Anglo-Mysore War and the consequent loss of half his kingdom, but he still probably had up to 30,000 soldiers.[citation needed]

The British forces consisted of the following:[2] 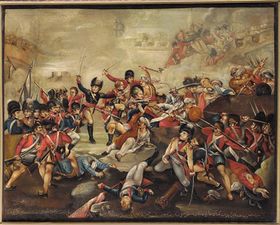 A Qajar Persian copy of a British painting of the assault

The Indian (sepoy) forces consisted of the following:[2][3] 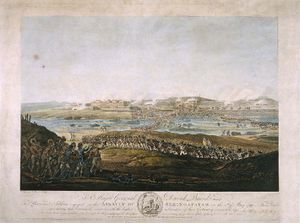 The assault of Seringapatam

Seringapatam was besieged by the British forces on 5 April 1799. The River Cauvery, which flowed around the city of Seringapatam, was at its lowest level of the year and could be forded by infantry — if an assault commenced before the monsoon. When letters were exchanged with Tipu, it seemed that he was playing for time. He requested two persons to be sent to him for discussions and also stated that he was preoccupied with hunting expeditions. Tipu Sultan's prime minister and general, Mir Sadiq, is alleged to have been bought over by the British.[4] 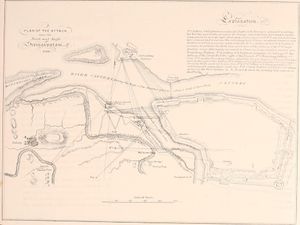 Plan of the attack on the north-west angle of Seringapatam

The Governor-General of India, Richard Wellesley, planned the opening of a breach in the walls of Seringapatam.[citation needed] The location of the breach, as noted by Beatson, the author of an account of the Fourth Mysore War, was 'in the west curtain, a little to the right of the flank of the north-west bastion. This being the old rampart appeared weaker than the new.' The Mysorean defence succeeded in preventing the establishment of a battery on the north side of the River Cauvery on 22 April 1799. However, by 1 May, working at night, the British had completed their southern batteries and brought them up to the wall. At sunrise on 2 May, the batteries of the Nizam of Hyderabad succeeded in opening a practical breach in the outer wall. In addition, the mines that were laid under the breach were hit by artillery and blew up prematurely.

The leader of the British troops was Major General David Baird, an implacable enemy of Tipu Sultan: twenty years earlier, he had been held captive for 44 months. The storming troops, including men of the 73rd and 74th regiments, clambered up the breach and fought their way along the ramparts.

The assault was to begin at 1:00 p.m. to coincide with the hottest part of the day when the defenders would be taking refreshment. Led by two forlorn-hopes, two columns would advance upon the defences around the breach, then wheel right and left to take over the fortifications. A third reserve column, commanded by Arthur Wellesley, would deploy as required to provide support where needed.

At 11:00 a.m., on 4 May 1799, the British troops were briefed and whiskey and a biscuit issued to the European soldiers, before the signal to attack was given. The forlorn-hopes, numbering seventy-six men, led the charge. The columns quickly formed, were ordered to fix bayonets, and began to move forward. The storming party dashed across the River Cauvery in water four feet deep, with covering fire from British batteries, and within 16 minutes had scaled the ramparts and swept aside the defenders quickly. The British follow-up columns turned right and left, sweeping along the inside of the walls until they met on the far side of the city.

Tipu's Tiger, an automaton now in the Victoria & Albert Museum, was captured at Seringapatam. 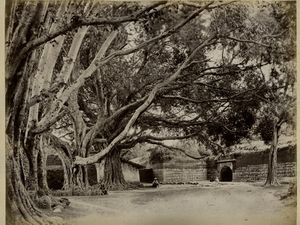 The spot where Sultan died. (Photo taken in the 1880s)

The column that rounded the northwest corner of the outer wall was immediately involved in a serious fight with a group of Mysorean warriors under a short fat officer, which defended every traverse. The officer was observed to be discharging hunting weapons, loaded and passed to him by servants, at the British. After the fall of the city, in the gathering dusk, some of the British officers went to look for the body of Tipu Sultan. He was identified as the fat officer who had fired hunting weapons at the attackers, and his body was found in a choked tunnel-like passage near the Water Gate.

Benjamin Sydenham described the body as:

'wounded a little above the right ear, and the ball lodged in the left cheek, he had also three wounds in the body, he was in stature about 5 ft 8 in (1.73 m) and not very fair, he was rather corpulent, had a short neck and high shoulders, but his wrists and ankles were small and delicate.

'He had large full eyes, with small arched eyebrows and very small whiskers. His appearance denoted him to be above the Common Stamp.
'And his countenance expressed a mixture of haughtiness and resolution. He was dressed in a fine white linen jacket, chintz drawers, a crimson cloth round his waist with a red silk belt and pouch across his body and head.

'He had lastly his turband and there were no weapons of defence about him.'[5]

Wilkie Collins's novel The Moonstone begins with the looting of the jewels removed from Seringapatam in 1799 from the legendary treasury of Tipu Sultan.

The Battle of Seringapatam is the main conflict in the novel Sharpe's Tiger, by Bernard Cornwell.

Seringapatam, drawn by James Welsh in 1803.

Much of the site of the battle is still intact including the ramparts, the Water Gate, the place where the Tipu Sultan's body was found, the area where the British prisoners were held and the site of the destroyed palace.

Around 80 men of the Swiss ‘de Meuron Regiment’, who fell during the siege, and their family members are buried in the Garrison Cemetery, Seringapatam.[6]

Memorial by the Mysore Government