From Infogalactic: the planetary knowledge core
Jump to: navigation, search
This article is about the 1853 naval battle. For the 1214 siege, see Siege of Sinope. 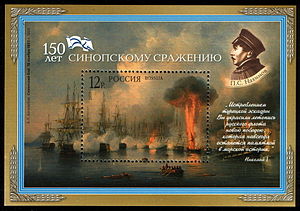 The Battle of Sinop, or the Battle of Sinope, took place on 30 November 1853 at Sinop, a sea port in northern Anatolia, when a squadron of Imperial Russian warships struck and annihilated a squadron of Ottoman ships anchored in the harbor. The battle was part of the Crimean War, and a contributory factor in bringing France and Britain into the conflict. This was the last major battle between fleets of sailing ships.[1] The battle is commemorated in Russia as a Day of Military Honour.

The Battle of Sinop was a direct result of the gradual disintegration of the Ottoman Empire and the loss of Ottoman force projection into the Black Sea. By 1850, the Ottoman Empire was deeply in debt and relied exclusively on British and French loans as a means of support. As a result, Ottoman leaders had no choice but to agree to drastic force reductions in both Army and Navy force tables. By 1853, Tsar Nicholas I saw the reductions as an opportunity to press Russian claims in the Trans-Caucasus and along the Danube River.[2] In July 1853, Russian forces occupied several Ottoman principalities along the Danube, as well as forts. When mediation broke down Sultan Abdulmecid I responded with a declaration of war. Fearing Russian expansion, the Anglo-French issued a concurrent ultimatum: Russia was to fight only defensively. As long as Russia stayed on the defensive the Anglo-French would remain neutral, but if Russia acted "aggressively" the Western Powers reserved the right to get involved.[3]

Hostilites began officially on 4 October, with a principal theater in Europe and another in the Caucasus. Sultan Abdulmecid ordered an immediate offensive to drive back the Russians and demonstrate Ottoman might before Ottoman finances totally collapsed.[4] The offensive along the Danube met with mixed success, but the Ottoman attack into the Russian Caucasus was relatively successful. By the end of October, the Russian Caucasus Corps was in danger of being surrounded.

To support the attack and properly supply his forces before significant snowfall, Sultan Abdulmecid ordered a squadron of frigates, steamers and transports to establish a supply corridor to the Ottoman Army in Georgia. Unable to interdict the convoy, Russian Naval elements remained in Sevastopol. Sultan Abdulmecid ordered a second convoy commanded by Osman Pasha, but by this time it was late November and the fleet was forced to seek winter quarters. The fleet ended up at Sinope, joining the frigate Kaid Zafer which had been part of an earlier patrol, and being joined by the steam frigate Taif from a smaller squadron. The Ottomans had wanted to send ships of the line to Sinope, but the British ambassador in Constantinople, Viscount Stratford de Redcliffe, had objected to this plan, and only frigates were sent.[5]

Initial Ottoman activity in the Black Sea had been allowed to proceed unhindered, but as the situation of the Russian Caucasus Corps deteriorated St. Petersberg was forced to act. Admiral Pavel Nakhimov was ordered to muster the Russian Navy and interdict the Ottomans. From 1 to 23 November, Russian squadrons were dispatched into the Black Sea to establish control of the sea. Two Ottoman steamers, the Medzhir Tadzhiret and the Pervaz Bahri, were captured by the Russians in short engagements. Russia was able to establish operational control of the sea lanes but storms forced Nakhimov to send back most of his force for repair. Left with only a frigate, a steamer and three ships of the line, Nakhimov continued the search for Osman and the convoy. On 23 November Osman's flag was sighted returning and then entering the harbor at Sinope. Nakhimov immediately deployed his ships into a blockade and sent his only frigate to retrieve as many reinforcements as could be found.[6]

On 30 November, Vice Admiral Novosiliski rallied six more ships to Nakhimov, completing the blockade force in a loose semi-circle. Additional steamers were expected, but Nakhimov decided to act before the Ottomans could be reinforced by additional ships. Osman for his part had been well aware of the Russian presence since 23 November, but felt his ships were safe in harbor. Sinope had substantial harbor defenses and forts with interlocking fields of fire and ample cannon.[6] Moreover, it was technically against the established rules of war to attack ships at anchor or for upper class ships to attack ships of a lower class and displacement. In a stunning command decision, Osman did little to break the weak Russian blockade, even allowing many of his crews to disembark.[6] 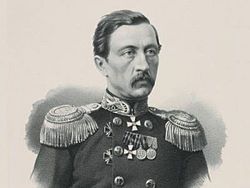 Russian Admiral Pavel Nakhimov, hero of Battle of Sinop and the Siege of Sevastopol 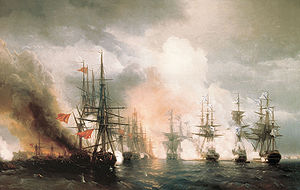 Russian ships at the Battle of Sinop, by Ivan Aivazovsky 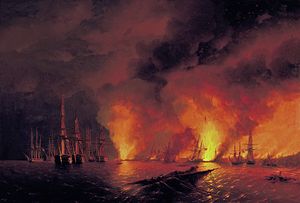 The Battle of Sinop, by Ivan Aivazovsky. Oil on Canvas

The Russians were led by Admiral Pavel Nakhimov, who decided with his officers that they would attack the Ottoman fleet which took shelter from a storm at Sinop.[7] Strengthened by the squadron of Rear-Admiral Fyodor Novosilsky, Nakhimov consolidated over 700 cannon in six ships of the line, two frigates and three armed steamers. The Ottoman forces included seven frigates, three corvettes and two armed steamers. The Russians planned to deploy their ships in two columns where they would advance to within close range of the enemy vessels before dropping anchor and opening fire. Under Admiral Nakhimov's command, the eighty-four gun ship Imperatritsa Maria was the first to engage when she fired on the forty-four gun Ottoman flagship Auni Allah.

The Russian Squadron entered the harbor from the Northwest in a triangular formation. Nakhimov arranged his force between the Ottomans and the shore batteries shielding his own force and exposing the Ottomans to potential friendly fire. Nakhimov spaced his battleships evenly in two lines covering the entire harbor with interlocking fields of fire. Russian gunners began to score hits on all of the Ottoman targets. The shells fired by Russian guns immediately set Ottoman ships on fire. Panic-stricken Ottoman sailors found firefighting efforts difficult amidst continued fire and almost constant shrapnel. After about thirty minutes of combat the Ottoman frigate was full of shot-holes and ran aground when her cable was cut. Imperatritsa Maria then attacked the forty-four gun frigate Fazli Allah which caught fire and grounded. Meanwhile, the other Russian ships engaged the Nizamie and Damiad, which were grounded. The Ottoman frigate Navek Bakhri exploded and sank along with the corvette Guli Sephid. Russian gunners continued the destruction sinking every ship in the harbor including launches, fishing boats, and other small craft.[7]

Only one Ottoman vessel, the twelve gun steamer Taif, managed to escape the battle while all the others were either sunk or purposely run ashore to prevent sinking. She fled to Constantinople and arrived on 2 December where she informed the Ottoman government of the defeat at Sinop. Once the enemy fleet was destroyed the Russians engaged Ottoman shore batteries and destroyed them. During the fighting a reported 37 Russians were killed and 233 were wounded, although one source says that a total of 266 Russian officers and crewmen perished;[7] at least three of the ships of the line were damaged. Ottoman forces lost over 3,000 men killed or wounded and their leader Osman Pasha was captured.

When telegraphic reports of the battle reached Russian authorities in St. Petersburg the reaction was jubilant. The untested and widely hated Russian Navy had proved victorious and the recent expenditure in its development seemed warranted. Several balls were held to celebrate the victory and a state funded parade was held. The affair was rather grand involving dancers, bands, parading troops that had not taken part in the battle, and criminals dressed up in Ottoman uniforms. Military advisors saw the battle as a turning point and pushed for shell-firing guns to be installed on all Russian ships.[8]

The reaction in Constantinople was less enthusiastic with Ottoman reaction ranging from concern to total panic. Russia had annihilated a vital convoy and now had operational control over the Black Sea. The destruction of the Harbor defenses opened the door to Russian invasion and suddenly the entire Samsun and Trabzon Coast was now at risk. Moreover, the Russian violation of the British/French mandate for the war meant that the actions of Russia could no longer be predicted and Russia might not be fighting with one hand tied behind its back.[8] Subsequent policy was directed toward the Anglo-French and the comprehensive military agreement that Istanbul had been trying to avoid.

The attack was seen by external powers as unjustified, as it was believed that Russia had no need to fear the Ottomans. It was referred to in the British press as the 'Massacre of Sinope', and caused a wave of anti-Russian sentiment in Western Europe.[9] The attack strengthened the pro-war factions in Britain and France, and provided them with the justification for a war to curb Russia bellicosity. Hawks in London pointed to Russian tactics as violating both the accepted articles of war and human morality. The shelling on Sinop Harbor and attacking ships of a lower class were both considered war crimes. Several doves attempted to stem the patriotic fervor, arguing that a global war with Russia over the Ottoman Empire was a waste of British talent and treasure. Lord Palmerston resigned over the affair and numerous anti-war articles ran in Paris and London. In the end however war hawks in the National Government won out and Sinop was seen as a just cause for war.

Sinope was not so much a battle as an ambush, but its results were nonetheless important to the practice of 19th Century warfare and the evolution of naval doctrine. Prior to Sinope the standard naval armament were smoothbores that fired cannon balls, shot, shrapnel or other projectiles. Paixhans guns or regional equivalents were slowly being integrated into navies but only the French, Russian and American navies had made a comprehensive effort. These batteries represented a clear evolution in naval technology that broke through the final ceiling of the Age of Sail.[10] Unlike previous smoothbore ordnance, Paixhans guns fired explosive shells and not mere metal projectiles. The shells themselves did both kinetic and explosive damage, causing fires. In addition, the new guns were heavier, could engage at a higher range, and possessed far greater penetrating power.[10]

But until 1853, no navy had made comprehensive use of shell-firing guns in a live combat environment. Indeed, many experts disparaged the new weapons and the larger ships required to carry them as too heavy for naval warfare. The results of Sinope were clear and showed that the new weapons were effective. As a result an arms race ensued with participant nations desperately looking for ways to up-gun existing ships and incorporate the shell-firing guns into new vessels.[10]

This was the last major battle between fleets of sailing ships.[11] The battle is commemorated in Russia as a Day of Military Honour. 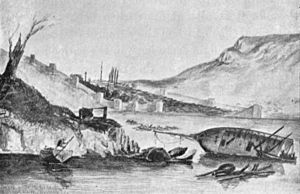 Drawing of Sinope by George Tryon onboard HMS Vengeance which visited the scene of the battle in January 1854.